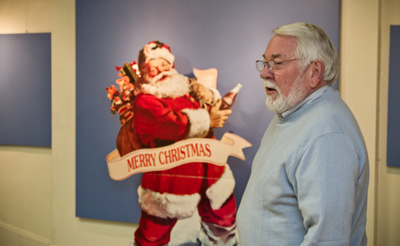 A Coca-Cola serving tray valued at $37,000, Santa’s face on original oil paintings, and Swedish delights will entertain visitors at this year’s holiday exhibit at the American Swedish Institute, opening November 6.

The ASI will be the first in Minnesota to display original artwork by Coca-Cola’s Santa Claus illustrator, the late Haddon Sundblom. The exhibit features more than a dozen of Sundblom’s original oil paintings of Santa, on loan from the Coca-Cola archives in Atlanta.

“This is an extraordinary coup for the ASI. It’s a real one-of-a-kind exhibit and unlikely to be in the Midwest again,” said Dick McChesney, former president of the both the National and Minnesota chapters of the Coca-Cola Collectors Club and guest curator of the display.

The exhibit will explore Sundblom’s artist development and showcases Coca-Cola collectibles from local collectors that connect to Sundblom’s work.

Haddon Sundblom was born to Swedish immigrants in 1899 in Michigan. The Coca-Cola Company hired him in 1931 to create an advertising campaign featuring Santa Claus. Sundblom turned to the popular poem “‘Twas the Night Before Christmas” for inspiration. 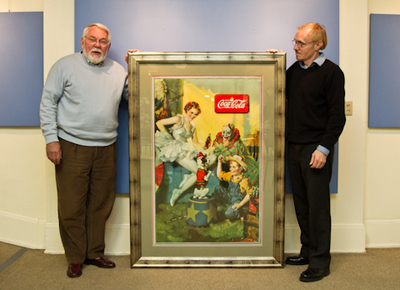 Guest curator Dick McChesney, left, and Curt Pederson, ASI curator of Museum Collections, show a 1936 poster by artist Haddon Sundblom included in the Institute’s holiday exhibit. Coca-cola posters such as these were on display in drugstores, said McChesney. (Photo by Jeff Rutherford)

“Up until then, there was no real image of Santa that was constant in people’s minds, so he used the poem for what his image of Santa was,” said McChesney. “His Santas are associated with kids and toys and homey kinds of things. The oil paintings often show deer and dogs. Santa was a real friend and a guest and always had a coke in his hand. He became a member of [people’s] family.”

Sundblom painted one Santa a year from 1931 to 1964 for magazines such as National Geographic and Ladies Home Journal. In the beginning he used a real person, his friend Lou Prentiss, as his Santa Claus model. “After Prentiss died, Sundblom used his own image. He was doing so many paintings of Santa he started looking like him,” said McChesney. 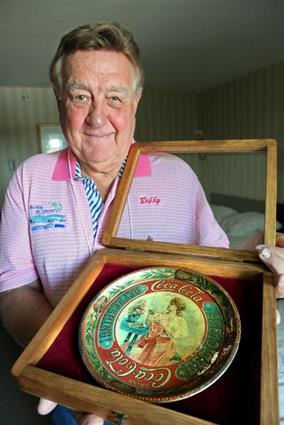 Bobby Williams of Columbia Heights and his rare Coca-Cola serving tray at the National Collectors Convention in Milwaukee in July. Williams’ tray will be on display at the ASI holiday exhibit. (Photo by Michael S. Sears, Milwaukee Journal Sentinel)

Phil Mooney, the Coca-Cola Company’s archivist and historian, said 15 oil paintings are going to the Institute. “They are a collection of advertising art. In addition, we are sending secondary materials, samples of what Sundblom created out of his paintings. Posters, calendars, and magazine ads. They are the actual ad tear sheets. The paintings are a unique part of American pop-culture and influenced how we think of Santa Claus today,” he said in a phone interview from Atlanta.

As well as his Santa photos, Sundblom created many “pin-up” girl images for calendars. His last illustration was the 1972 December cover art for Playboy magazine, featuring the model posing provocatively in a red Santa suit and hat.

100 Coca-Cola collectibles will be on display, including many from McChesney’s personal collection. “Coca-Cola collectors are bringing in articles to tie-in with the Santa paintings. We have a rare combination of good pieces from people willing to share,” he said. 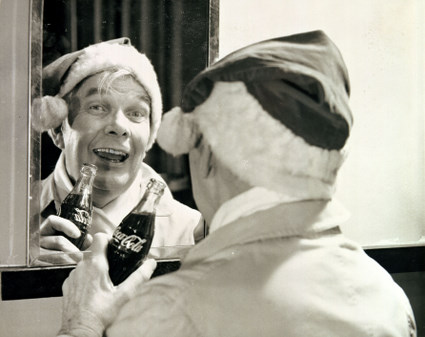 Highlighting the collectibles exhibit is an 1897 Coca-Cola serving tray valued at $37,000 that was used at soda fountains and is owned by Columbia Heights resident Bobby Williams.

“It’s the rarest of rare,” said McChesney. “It’s the first one [Coke] made. The serving tray was made by a company that manufactured tobacco tins. Coke didn’t know what a tobacco tray was. This one was kept in a dresser drawer for four decades, so it’s rare and sensitive to the light. It’s priceless.”

McChesney, 77, has been in the beverage business since he was 13, a Coca-Cola hobbyist from the 1960’s, and wishes he had bought everything Coke in the 1970’s. “If you live with your wife, you have to be reasonable in your collecting,” he said. “Coke has made so many products, no one would complete their collection.” 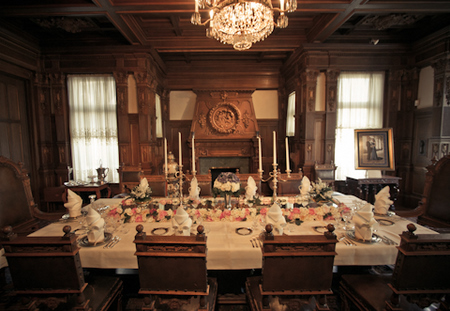 The American Swedish Institute will decorate the mansion’s Dining Room in Swedish Christmas splendor. Four other rooms will also get a holiday make-over. (Photo by Jeff Rutherford)

McChesney founded the Cola Clan in 1974. Coca-Cola did not allow the use of their name. In 1985, the Cola Clan got permission to call their group the Coca-Cola Collectors Club which gave them more credibility, but still need authorization when using the Coke name. “The Company is very selfish about their brand. They are the icon of their industry,” he said.

But being first counts and McChesney’s club earned the bragging right to be called “Minnesota First Chapter.” Today, the national club boasts 10,000 members all over the world, including chapters in New Zealand, Sweden, Australia, Japan, and Canada. “I think there is a Pepsi Club with three people in it,” said McChesney.

Two years ago, ASI President Bruce Karstadt learned about Haddon Sundblom from a small museum on the Aland Islands between Finland and Sweden, where Sundblom’s ancestors were from, said Curt Pederson, Curator of Museum Collections and Director of Exhibitions at the Institute. 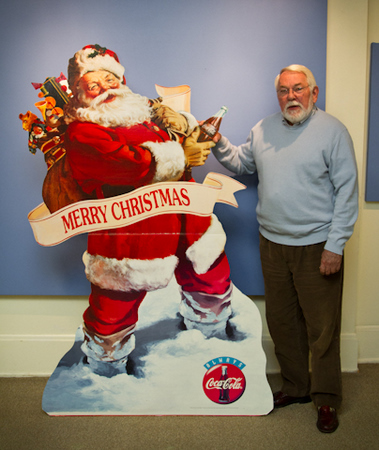 Guest curator Dick McChesney “grabs” a coke from a cut-out of Santa at the ASI. (Photo by Jeff Rutherford)

“We found out the Coke headquarters in Atlanta holds a collection of Haddon’s original art work, and items like banners, mugs, 2D and 3D pieces that coke produced,” he said.

Pederson went to Atlanta to meet with Phil Mooney about having an exhibit in Minnesota. “Phil had to feel comfortable with this group of Swedes in Minnesota, that we were an exhibit. We have a unique situation of being a museum and an historic mansion. We felt Santa could fit in well here.”

Mooney told Pederson that the best resource for all things Coke lives in Minneapolis-Dick McChesney. “Dick has lived this exhibition. He’s gathered rare [Coca-Cola] pieces from the community,” said Pederson. 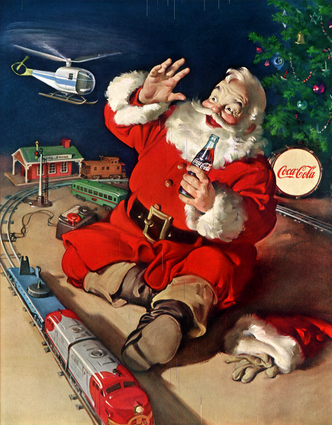 Visitors to the Coca-Cola exhibit will also be able to tour the ASI, which will be in full holiday splendor. Many people come just for the holiday displays, said Jenn Stromberg, Communications and Marketing Coordinator. Five rooms will be decorated with trees and table settings representing the holiday traditions of Sweden, Norway, Denmark, Iceland and Finland. “This will be a really big exhibit,” she said.

Both Dick McChesney and Phil Mooney will be guest speakers at the ASI on January 9 to talk about the exhibit and will include Coca-Cola treats. “I am giving a presentation on the history of the paintings and why [Sundblom] is such an important part of Coca-Cola advertising,” said Mooney, who also writes a blog on Coke’s history.

On four Wednesday nights in November and December, there will also be a guided tour of the Coca-Cola collectibles portion of the American Swedish Institute’s holiday exhibit. A guide will show visitors the highlights of the exhibit. Meet in the Grand Hall of the Turnblad/ASI mansion at 6:30 p.m. on Wednesdays, November 17 through December 22 (except November 24).

“The Coca-Cola Company is excited to bring an illustrator of Swedish descent to American Swedish Institute,” Mooney said. “It’s fun to bring a little bit of Swedish-American history to the Institute.”

The holiday exhibition, “Santa Claus, Coca-Cola, and Swedish Design,” will be on display Nov. 6, 2010 to Jan.16, 2011 at the American Swedish Institute. Admission is $6. Hours and further information can be found on their website.