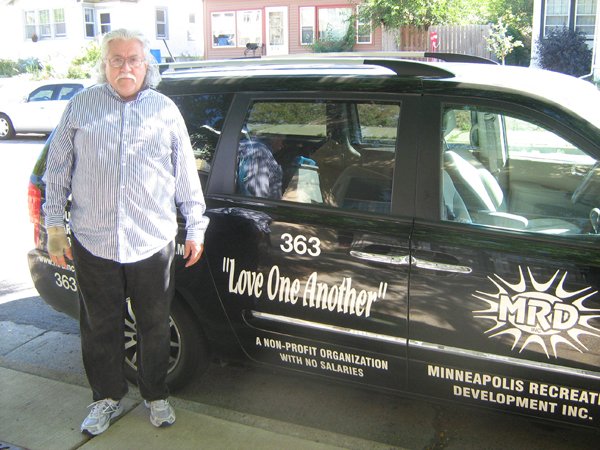 The power of caring commitment is amazing. For instance it saw, in 2012 alone, 500,000 sandwiches donated to the hungry homeless principally through the tireless energies of Allan “The Sandwich Man” Law, who has bent his back to this labor since 1967.

Those sandwiches, it bears pointing out, are given out at an important time in the day — rather the night — of the disenfranchised. Shelters and soup kitchens shut down in the early evening, and if you have nowhere to go and missed that last night meal, you are out of luck.

That is why Law starts his deliveries nine at night and continues until the next morning, driving throughout Minneapolis, hitting spots that include bridge underpasses and other places the homeless habitually hole up. Places where, frankly, most folk would be afraid to go in broad daylight.

That’s the kind of heart he has. It’s more important to him to be there for those in need than it is to place his own safety first.

To be sure, Law doesn’t do it all on his own, at least not anymore. He did it on his own until he just couldn’t keep financing it and founded Minneapolis Recreation Development (www.mrdinc.org), a small nonprofit consisting of himself and three board members, to continue getting a big job done.

Avoiding homelessness himself, Law was able to keep helping those stranded on the street. And he hasn’t stopped since, working at a taxing pace. His spirit of giving stems from his profession as a teacher at Field Middle School, then Hall School [now closed], finishing at Andersen School.

On retiring, he hatched an idea to offer youngsters a productive way to spend their time after school, weekends and summers. That grew into broader outreach. Though his nickname is The Sandwich Man, MRD does much more with three programs at its core: Youth Builder, Samaritans Outreach and 363 Days Food.

Wherever and however Law can help, he will. Between all three, his waking hours indeed are filled. “I work 18 hours a day, everyday.”

Youth Builder is an extension of his initial effort. Along with constructively occupying youngsters’ time, though, it supplies things like clothes, books, backpacks and funds for field trips. Samaritans Outreach steps between the homeless and the grave, providing resources for, among other lifesaving interventions, coats, hats, boots and socks in winter. Further, it gives referrals for chemical dependency, housing, job placement and health care.

The name for 363 Food came from an off-the-cuff conversation he had with a board member. “[Many] organizations,” he reflects, “offer meals on Thanksgiving and Christmas. They can have those two days. We’ll handle the other 363 days of the year.”

These efforts attract healthy attention from donors with deep pockets. Accordingly, as an example, publicity material for the 363 Days Food program attests, “Sandwiches were prepared and donated by more than 700 community groups, churches, schools, individuals and companies. More than 10,000 individual volunteers participated…[to the benefit of recipients] ranging in age from 7 to 97 years old.”

It continues, “Currently Allan distributes an average of 1600 sandwiches a night to individuals, shelters and locations.” Law is, by no means, a lone ranger. A member in good standing of MN Council of Nonprofits, Minneapolis Recreation Development operates in conjunction with a long list of agencies, among them Union Gospel Mission and Dorothy Day Center/Catholic Charities in St. Paul and, in Minneapolis, Marie Sandvik Center, Little Earth Community and Hospitality House.”

Saturday evening, September 28, from 6 until 10, you’re invited, free of charge, to join Allan Law for an informal get-together at North Minneapolis’ Capri Theater, at 2027 West Broadway.

“We’re calling it a celebration, but it’s really just a way for people to connect with each other from the community.” Like Minneapolis Recreation Development provides for the homeless, there’ll be free food for attendees — and something to drink, too.