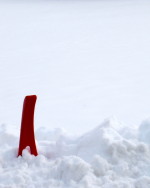 What to do when your city is dumped with five feet of snow for the 83rd time this winter? Maybe the only printable suggestion one might make would be to hole up at the world’s coziest bowling alley with Sandbox Theatre’s riff on Fargo, the 15-year-old film that’s become pop culture’s most iconic depiction of Minnesota winter. (I reviewed Fargo in the Daily Planet when it screened at the Walker Art Center in 2009.)

Sandbox’s Fargo is a quick little cabaret, a non-linear set of pieces inspired by the now-classic film. It’s an appealing idea, but how does one go about commenting artistically on a Coen Brothers film? The Coens are among cinema’s most self-concious, meta-referential auteurs. What’s there to say about their films that the films don’t say about themselves?

The Sandbox players offer a variety of answers, none of them entirely satisfactory. The two best scenes star Courtney McLean as Marge Gunderson—yes, you read that right—enacting scenes from the film first in a British accent, and then in Spanish-language telenovela style. The effectiveness of those two scenes demonstrates how Fargo both uses and transcends its caricatured Minnesota setting. The Coens use style as it’s used in Japanese Noh, to take the viewer to a place where different truths can be told. (Well, that’s what they do when they’re at their best, as they are in Fargo; in lesser films, their outrageously manicured style simply eats itself.)

Also effective is a weird interlude that explores the sexual fantasies of Jean Lundegaard (yes, you read that right too) and a deadpan video interview with the Lundegaards’ son Scotty, now grown to a 32-year-old man. Less effective is a long narrative about a Japanese travel agent who comes in search of the cash that’s hidden and never discovered in the film, and the mock commercials that reference details from the film without really justifying their own existence.

But do they need to? This is the Bryant-Lake Bowl, where theater not infrequently devolves into dinner theater that is, despite its low budget and high IQ, nonetheless dinner theater. Sandbox’s Fargo works sort of like a bonus featurette on a DVD: it’s not essential, and it wouldn’t stand alone, but it adds a little dimension to the main attraction.