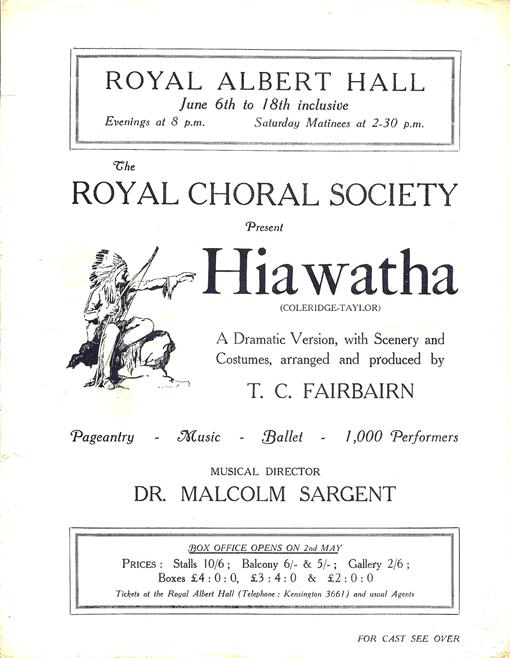 The current issue of BBC Music Magazine features an article about the wild success, between the World Wars, of an annual Royal Albert Hall production of three cantatas about the Ojibwe legend of Hiawatha. The cantatas were based on The Song of Hiawatha, the famous Henry Wadsworth Longfellow poem that had in turn been inspired in part by a photograph of Minnehaha Falls in what is now Minneapolis.

Green does not make much comment on the cultural dimensions of this spectacle—performers were painted dark with “horrible brown liquid makeup,” remembers one now-elderly participant—perhaps because little needs to be said. Hiawatha dramatizations were  popular around the world; in Minnesota, residents of Pipestone staged an epic rendition of the legend from 1948 through 2008.

Adding an interesting dimension to the story of the British Hiawatha is the fact that its composer was a black man: Samuel Coleridge-Taylor, who died of pneumonia 100 years ago this year at the age of 37. Born to an English woman and a Sierra Leonean Creole man who went back to Africa not knowing he was leaving a son, Coleridge-Taylor was named in tribute to the poet Samuel Taylor Coleridge.

Too young to die
his great simplicity
his happy courage
in an alien world
his gentleness
made all that knew him
love him.