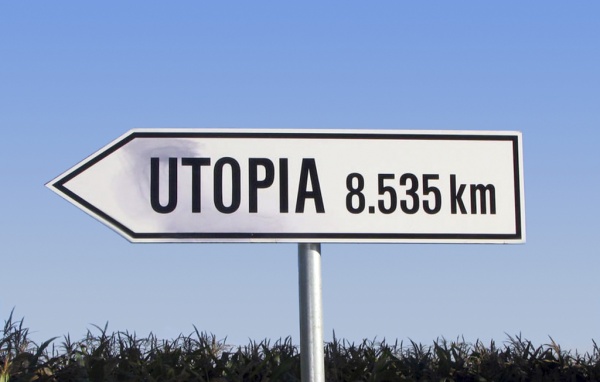 Before I became a journalist I went to grad school for sociology, and over the years I’ve spent a lot of time defending sociology against artists and writers who think that it’s a shallow, reductive discipline—you can’t reduce social behavior to equations, so why even try? My response is that no one understands the complexity of social behavior better than one who has tried to reduce it to equations and realized just how difficult that is. If you never try to scientifically test your theories about society, you can run around spouting all sorts of glib theories and remain perfectly convinced that they’re correct.

The most perplexing, and frustrating, thing about Sam Green’s Utopia in Four Movements—a presentation narrated live by Green on Saturday night at the Walker Art Center, accompanied by film clips, still photographs, and the live music of the Quavers—is that it offers some Big Ideas about society and supports them with provocative examples, while ignoring the obvious discrepancies between the ideas and the examples and making no mention of the idea that considering data more systematically might yield more satisfying answers.

Green, who created and presents the piece in collaboration with Dave Cerf, considers the idea of utopia with respect to four specific examples: the language Esperanto, the shopping mall (Southdale, the first modern indoor shopping mall, plays a prominent role), communist Cuba, and the work of forensic anthropologists. The Big Question the piece asks is: Why bother imagining a utopia when its achievement is so manifestly impossible? In other words, should we give up on our dreams of the perfect society?

It’s a fair enough question, and Utopia in Four Movements is often provocative, informative, and entertaining. Green pushes his calculatedly informal asides a little hard, but nonetheless he’s on to some great stories, and he tells them fairly well. If the piece were presented as a gentle meditation, it would make for a thought-provoking and enjoyable evening. The live multimedia collaboration is nothing new—especially for frequent visitors to the Walker—but it’s well-executed.

What raised my hackles is that Green isn’t just content to raise questions: he has an answer, an argument that he seems to think his examples support. Really? Here are just a few of Green’s questionable moves:

Utopia in Four Movements reminded me of the books of Malcolm Gladwell, a writer who’s so incredibly gifted that you swallow his arguments without really thinking too hard about whether they actually match the evidence he’s presented. For more information on this, see p. 73 of Sociology for Dummies—the section titled “Preparing for Potential Pitfalls: Data/Theory Mismatch.”

In the end, Green argues that we do need the idea of utopia, even if an actual utopia will never come about. He shows us progressive American consumers making responsible decisions; to paraphrase a point my friend Becky Lang raised, why do discussions of utopian ideals always have to come back to the Wedge Co-op? Could it be that in pursuit of utopia, there are more important things to consider than whether your coffee sack is biodegradable?

I do agree with Green that we need the idea of utopia—but if we’re actually going to improve society, we need to seek real answers to hard questions. Maybe Esperanto and communism and the shopping mall weren’t the best ways to bring about a perfect society on earth, but that doesn’t mean they’re all equally useless. I hope that our elected officials neither embrace nor dismiss any piece of legislation simply because it seems like a good or bad idea: I hope they ask for hard data and rigorous analysis. Utopia may be impossible, but if social progress is to be a genuine possibility, we’ll have to start looking for it with unclouded vision.