When 12,000 runners take to the streets of Minneapolis and Saint Paul for the 30th annual Medtronic Twin Cities Marathon October 2, there will be one participant who will surely stick out. She’s a big fluffy pink pig named Mudonna, the official mascot of the Saint Paul Saints baseball team.

But what some folks won’t know, is that underneath all that fur will be 39-year-old Seigo Masubuchi, a Japanese native who’s determined to help those in his homeland after an earthquake and tsunami ravaged Japan a few months ago.  He’ll run the marathon and help his cause at the same time.

“I want to help Japan recover from the disaster. There’s still so much recovery work that’s needed. I love to run and I love to socialize so this is the perfect thing to do, “said Masubuchi recently. 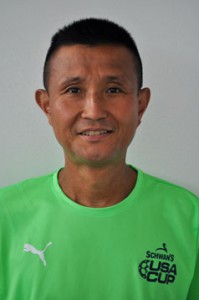 Originally from Tokyo, Masubuchi immigrated to the United States 18 years ago to attend the University of Minnesota, where he studied speech communications, journalism and international business.

The Saint Paul resident is running the marathon to raise money for two specific Japanese organizations — the Tokiwagi Gakuen High School in Sendai, Japan and the Convoy of Hope, which has been installing refrigerators, faucets, washers and dryers and other appliances to temporary government shelters. Tokiwagi Gauken High School students have a connection to Minnesota. Its girls’ soccer teams regularly compete in the USA Cup International Youth Soccer Tournament in Blaine.

Masubuchi has run almost 30 marathons in the past ten years. He has run all of his marathons with no costume and has completed them in under three hours. He is so fast, he has qualified for the coveted Boston Marathon multiple times. But this will be the first time he has ever run in a pig suit, which he believes will help garner attention for his fund raising goals.

The 39-year-old has also made this challenge a personal goal. He wants to beat the current mascot record of running a marathon. To do that, he has to beat Jefferson the Dog (Peter Donato), who ran the Toronto marathon last fall in 4:15:03. “I really want to try to set a world record and I think I can do it!”

For the past several weeks he has been doing training runs in the costume. This past weekend he ran 16 miles with friends who helped carry water bottles. During the race he will also be running with pacers, who will keep him going when the going gets tough.  They will carry extra water and make sure he doesn’t fall behind his time goal.

“I am hoping and praying for cold weather,” he said. “But it will be a challenge no matter what the weather.”

The costume does add a sizable amount to his body weight, but he’s done alterations such as making the legs lighter and punching holes in the head for ventilation.  Masubuchi even had a special vest made for the costume for his training runs, which explains why he is running around his Highland Park neighborhood as a pig.

He admits to getting a lot of stares, especially when going up and down Summit Avenue. The attention has brought in donations but he’s hoping to raise even more money if he can beat the current world record.

When not running around as Mudonna, the marathoner is Director of International Development and a game day entertainer for the Saint Paul Saints. In July, Masubuchi approached the team’s management to help him collect donations. They jumped on board and helped their employee come up with different donation levels and incentives, so he could raise money during Saints games as well.

Even if he doesn’t make the goal, Masubuchi says he can still say he had fun trying.  “The main thing about doing this is the camaraderie.  I am very social and make friends fast.  I love to run with others and help others.  It will be fun seeing the reaction of folks to me running in a pig costume.”

One thing is for sure, he’ll be the fastest pig in the marathon. You can still donate to Masubuchi’s campaign for Japan. Donations are being accepted at http://saintsbaseball.com/funisgood/runforrecovery.