Once upon a time, there was a tiny little popcorn store on a charming little street in the quaint little town of Saint Paul. The store was called “Flavocorn” — a mighty newfangled name, back in 1932. A few years later, a fellow named Arnie Kelsy bought the Flavocorn store with a mind to sell some candy alongside the popcorn. The Great Depression came and went;  WWII was fought and won. Arnie changed the name to “Candyland.” 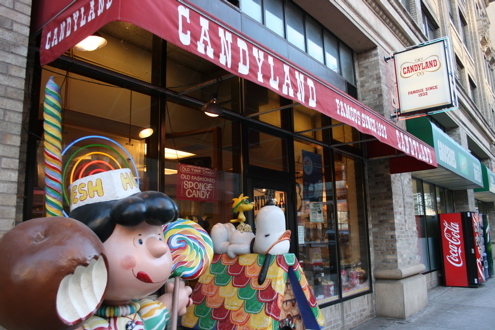 The years ambled by, as they do in Saint Paul, and pretty soon a nice young couple named Doug and Brenda Lamb bought Arnie’s store. This was in ‘81; old Arnie stayed on to show Doug and Brenda the ropes. They caught on quick: Doug had worked there when he was a kid. Soon they were selling popcorn and candy like hotcakes.

One hot, summer Sunday in 1988, Brenda was daydreaming about the popcorn she’d eaten on a recent trip to Chicago, a town famous for its love of popcorn. Brenda had been disappointed to find that Chicago’s plain popcorn was awful — dry, hard, and tasteless — but she’d sampled something else that struck her fancy: a combination of caramel corn and cheese corn. 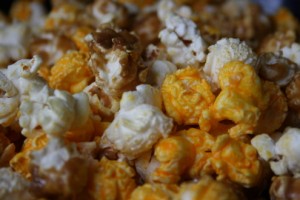 When the temperature hit 104 degrees that Sunday in ‘88, Brenda figured it was going to be a slow sales day. She had the idea to do a little experiment. What if she mixed some of Candyland’s own caramel corn and cheese corn, and then added some plain popcorn as well? Candyland’s plain corn was tasty and moist, not the dry stuff she’d had in Chicago, and she thought it would lighten up the heavy flavors of the caramel and cheese corn.

She tossed the three popcorns together, bagged them up, and displayed them in the window. Then she had another idea: she’d call the new combo “Chicago Mix.” It had a fun, big-city ring to it, and it paid tribute to the popcorn she’d had on her trip. 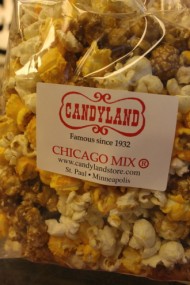 Finally, a customer straggled in from the sweltering Saint Paul street. “Say, how about tasting something new?” suggested Brenda. The customer gave it a try. Well, that customer must have told his friends, because pretty soon another customer came in and tried it. And another. Next thing Brenda knew, that slow day had turned into one of Candyland’s busiest. Word got out, and people came in asking for Chicago Mix by name.

Now, Brenda and Doug were pretty sharp businesspeople. They’d invented a product that people were demanding, so they figured they’d better get right out and trademark it. And that’s just what they did. Brenda’s Sunday afternoon inspriation officially became “Chicago Mix®.”

What Brenda and Doug didn’t know was that other popcorn sellers would just go right ahead and copy them, despite the legal trademark they’d gone to the expense of procuring. At first, Brenda and Doug would send a polite letter when they caught someone using the term “Chicago Mix.” Often as not, the offending party would say, “Whoops, we’re sorry! How about if we call ours ‘Chicago-Style,’ or ‘Milwaukee Mix’?” Then their lawyers would work it out, and Brenda and Doug were just fine with that.

But some of the big, fat, corporate snack giants just plain ignored Candyland. “Who cares about some two-bit operation in little old Saint Paul?” they would sniff. “Our lawyers can out-lawyer their lawyers any day.” 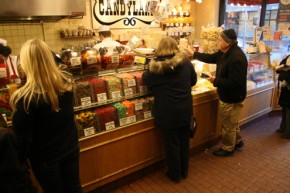 Sadly, it was true. Brenda and Doug couldn’t afford to take on a huge company like Snyder’s of Hanover. Worse, the stale stuff these big companies were calling “Chicago Mix” was nothing like Candyland’s homemade product, popped fresh every fifteen minutes, all day long. They were giving Chicago Mix® a bad name.

And to make matters even worse, one of the most famous popcorn vendors in Chicago, Garrett Popcorn Shops — which used to be a small family business like Candyland, before it was bought by a real estate developer and became “CaramelCrisp LLC” — was using the name to sell its own caramel-cheese corn mix.

Well, Brenda and Doug have four grown-up sons and daughters. All four of them work at Candyland. They started two new stores in downtown Minneapolis. They still pop their corn in the same kind of old-fashioned hot air popper that Arnie used back in the ‘30s, because there just isn’t any better way to do it. Older folks who loved Candyland when they were young still walk in, take a whiff of the sweet-smelling air, and say, “Why, it’s just how I remember it!” To this very day, kids come crowding in after school to get a popcorn treat and a memory or two.

And that’s what’s really important to Brenda, Doug, and their children, just as it was to Arnie Kelsy, and to the fellow who started Flavocorn before him, eighty short years ago. They’re going to keep making fresh, delicious popcorn and candy for the fine citizens of Saint Paul and Minneapolis for as long as the good Lord is willing. 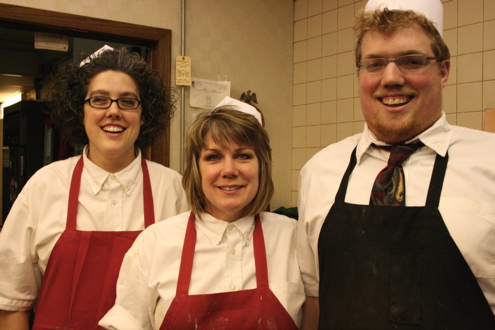 Well, that’s the story of Candyland, the tiny little popcorn store in the quaint little town of Saint Paul, which just happens to be in the great big country called The United States of America, founded on the principle of justice for all. You might not have a pile of money to help Brenda and Doug get their due. But when you next stroll in for a bag of crunchy, sweet, salty Chicago Mix®, you sure can give them a big thumbs up, and let them know you’re on their side. 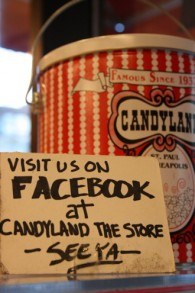