I went with my family to an event for National Train Day (as suggested by a recent post by Julie). We drove to St. Paul since the Green Line is not yet open. Driving is break-even with paying for 3 fares on the bus round-trip, and my once non-driving, Amtrak-riding wife wouldn’t take the bus anyway. Free parking in St. Paul is a little tricky to find on Saturdays now, but fortunately, the new Saints Stadium construction has not started and the free Farmer’s Market parking at the old Gillette plant is still open, so we parked there and walked a few blocks through the early season market, passing mostly preserves and garden plants, to the station.

We entered the dimly authentically-lit Saint Paul Union Depot (SPUD), a large but not magnificent space. A train station with no trains. The restoration is nice, and I am sure a better space than the restorers found it in, but the original structure was really nothing special at all. Having only been to the front of the station previously (the acoustically challenged headhouse), I was actually disappointed at the rest of it given how much fuss and money have been expended on the project. 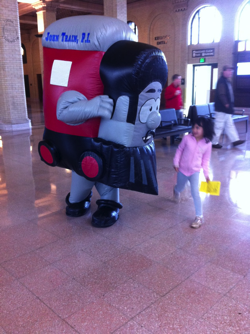 The money spent on the restoration was $243 million, one-fourth of the cost of an LRT line serving 100 to 200 times as many people per day? Okay, it’s still better than a Vikings Stadium, but is that really the bar for public investment? We should always ask what else ‘we can get for that money’ given that our wants outstrip our wallets.

The building was perhaps constructed at the nadir of American railway architecture, missing both the Belle Epoque ornamentation of the 19th century, and the Art Deco of just a few years later. Instead going for the stern and spartan neoclassical style reflecting, if not appealing to, the sensibilities of pragmatic upper Midwesterners.

It is “considered to be one of the great architectural achievements in the city” sayeth Wikipedia. That does not speak well of the city, and I believe a false claim. Off the top of my head, I would rate the Cathedral, the Capitol, and the Science Museum significantly higher on the list. Frankly among transportation structures, I would rank Bandana Square higher on the list. And this is all leaving aside what has been destroyed. It is nicer than the Midway Amtrak station it will eventually replace.

As we entered, to our left some early twenty-something lady DJs for the Disney radio channel (apparently Disney has a radio channel) were trying to encourage some youthful dancing to popular music. They were getting no custom. Christo’s restaurant was also mostly empty, though one of the waiters was dancing with the DJs.

There was an Amtrak swag area farther in, with a longish line for stuff. The entire St. Paul rail fan apparatus was in place: from Choo Choo Bob’s, to the Twin Cities Model Railroad Museum, to the Minnesota Transportation Museum, to the NLX booth (with a brochure promising “profits” from their line), to the rail passenger association with a lot of lines drawn on a map of Minnesota. Red Rock’s booth was not manned (just like their trains). 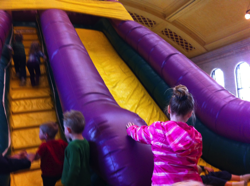 The big attraction was the bouncy house and the bouncy slide. The Slide was manned by a security guard, to make sure the kids didn’t pass each other climbing up the inflatable slide, which could be hazardous.

At the end of the Depot was a sign advocating free train rides. We went downstairs. They were fake trains. Okay, to the extent that one motorized vehicle pulling a trailer is a “train”, they were trains, but they were untracked, not steam, diesel, or electric powered, small, and ran on the platform, not the rail. They couldn’t even get the transportation museum to operate a short-line run of one of their tour trains at the Jackson Street Roundhouse. The small train was nevertheless full, carrying a load of about 10. 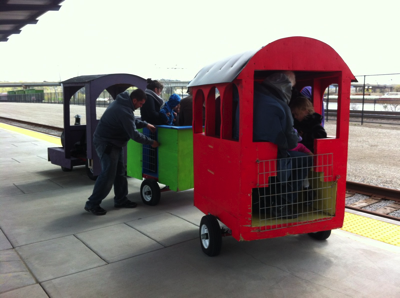 Needless to say, the children were displeased. I had to promise a real train ride soon. Blue Line here we come.

I can’t help but think the cavernous space could be better used for almost anything besides a train station serving about 175 boarding passengers a day. (Yes of course more IF they add service.)

If we want to steal ideas from other cities, some thoughts for adaptive reuse for this future pale proboscidea include: An Exploratorium, an aquarium, a planetarium, an indoor market. I am sure there are others.