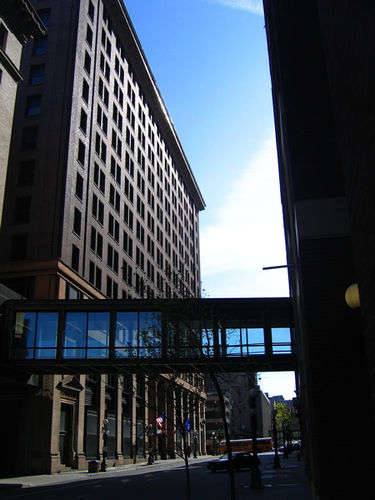 I’m sure there are many who say they love Saint Paul more than any other place on earth, but for me to say that would be an understatement. That’s because living anywhere outside of downtown Saint Paul would be like being in jail. I live in the heart of the skyway system in downtown, and for me it is freedom. You see, I am both deaf and blind.

Many deaf-blind Americans live within invisible prison walls. No, it’s not because of deaf-blindness itself, but because many places don’t have the transportation, services, and access that would make it possible to be independent without hearing and sight. So, in many places, deaf-blind people feel stuck, just as anyone without legs would feel stuck if there were no wheelchairs and no sidewalks outside. But Saint Paul isn’t one of those bad places for people with slightly different bodies. Minnesota has some of the nation’s very best transportation services and other accommodations for accessibility.

The skyway system, though, is the frosting on the cake. It is so much easier to get around through skyways instead of crossing streets outside. It is not safe for me to cross a street on my own, so to do that, I hold up a card and hope someone will come along soon, see it, read it, and then offer to help me across. That works, and I do that if I am traveling beyond the skyways. But it’s so wonderful when I don’t need to hold up that card and wait in the cold.

Thanks to the skyways, I can experience the same ease that most people do. Most things out there are designed for people’s convenience, but they’re for hearing and sighted people. If you feel like coffee, you can drive to the nearest coffee shop. And that’s going to be very near you from anywhere you may be coming. But many of my fellow deaf-blind citizens don’t have that privilege. They have to call paratransit to book a ride three days later – imagine how bad their hankering for that mocha latte must be by then! But I, I can just up and go. Just elevator down to the skyway level and then tap the tip of my white cane on the variously textured surfaces through different buildings.

After living here for five years, I know downtown Saint Paul like the back of my hand. But the landscape in my mind is very different from what you might see and store in your mind. I wouldn’t be surprised that there are many ugly sights, such as all those bland logos of fast food chains. Perhaps the skyways feel claustrophobic to some, and to others they may be just another gray patch of corporate America. But for me, they’re more than pure beauty. They’re freedom.