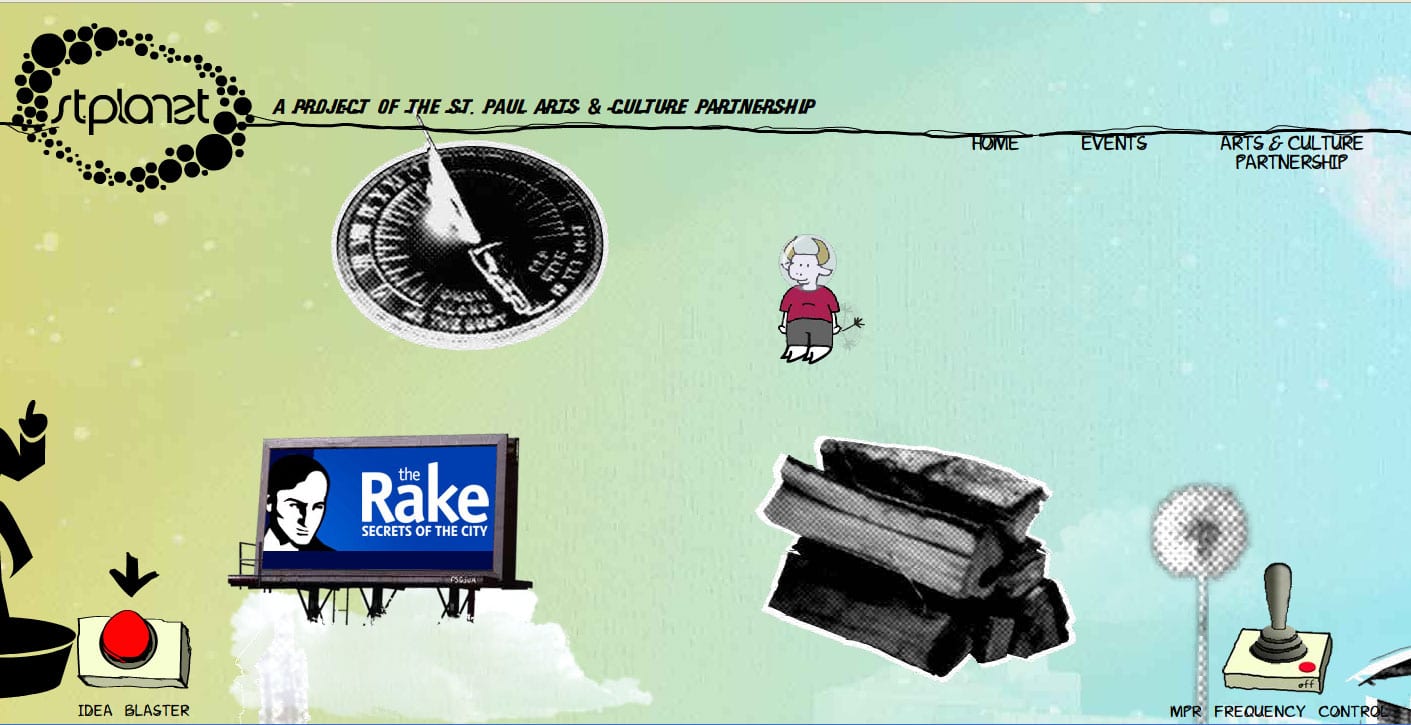 In 2008 I told a cautionary tale in mnartists.org: the tale of “St. Planet,” an incredibly elaborate website that had visitors piloting animated “culturenauts” over an eerie blue-and-mustard landscape in which St. Paul landmarks floated. The website was a project of the St. Paul Arts and Culture Partnership (ACP), a group of Capital City cultural institutions—except it wasn’t really.

Actually, the website was created by Minneapolis marketing firm Periscope, which donated many pro bono hours to the project; the City of St. Paul also chipped in $15,000. The total cost, including Periscope’s in-kind donation, was described to me by a Periscope representative as “well into the tens of thousands of dollars.”

It seemed like a win-win situation: Periscope got a nice feather to put in its cap, and the ACP got a spectacular new website. In fact, though, the project turned into at best a win-lose situation, and possibly even a lose-lose situation.

The site looked impressive, but wasn’t designed to be very useful for anyone who wanted actual information about going out in St. Paul. Further, the highly customized site was difficult for ACP staff to make any changes to: those had to go through Periscope.

The site was launched in 2007 and seemingly made a quick splash—ACP marketing chair Sarah Fossen told me of the “young, hip demographic” who turned out to the launch party—but by 2008, enthusiasm was already much more muted. Of the four ACP members I called to ask about the site’s impact, three of them couldn’t say that it had any impact at all, and at least one of them wasn’t even aware of its existence. Periscope’s Tom Flint declined to get specific about visitor numbers, saying only that traffic had “kind of leveled off.”

“The site will be up there for at least three years,” said Flint, “so I think there’s an opportunity for us to, over time, build a good base of regular traffic.”

Three years have now passed, and the sun has set on St. Planet: the site’s URL, stpaulculture.com, is occupied by Japanese spam. ACP’s Web presence is now the much simpler acpstpaul.org, which includes a calendar of ACP events, basic information about the organization, and a single contact e-mail that resulted in a bounceback when I sent an inquiry.

ACP hasn’t entirely given up hope on attracting the “young, hip, and edgy”: on January 19, the organization hosted a members and friends happy hour at the Amsterdam Bar and Hall, a new Lowertown hot spot—both WWW and IRL.