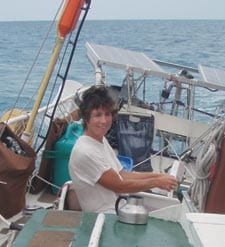 "Life on land can be very stressful in very minute ways, whereas life on a boat is simple. It's relaxed. Stress is reserved for actual stressful events like when you're running aground or a storm is coming."

A sailboat entered the lives of Katya and Mark Gordon soon after they met. For Katya, it was another move in a series of adventures. After college, she had moved from her home in Philadelphia when she accepted a job at an educational wilderness camp in Ely. It was in Minnesota, too, where the couple met.

“It seemed like a good thing to do, a good next step,” Gordon said. Yet she wasn’t an accomplished sailor. Not only did she learn to sail a big boat with a cabin, she also learned how to live on it. And, how to raise her two daughters on it.

In 2005, when the girls were 1 and 3, Gordon and her husband took a summer-long break from their jobs to circumnavigate Lake Superior on their boat. Sailing the biggest of the Great Lakes with two toddlers was not easy. The family used cloth diapers because there wasn’t space on the boat to store large numbers of disposable diapers. This meant a daily scrubbing of soiled cloth.

Plus, because storage space was small, they packed bulk dry goods with high nutritional value for the whole family, such as beans, instead of kid-friendly, but sugar-loaded, snack packs.

Keeping two small children safe on board a moving sailboat was a concern, but the girls adapted easily by developing a curiosity about how the boat was driven, and they spent hours in the cockpit mimicking their parents. Despite all the “hardships” living on a boat presented, on that trip, Gordon and her husband discovered the life they wanted. “We could never be mainstream again,” she said.

“Life on land can be very stressful in very minute ways,” Gordon said, “whereas life on a boat is simple. It’s relaxed. Stress is reserved for actual stressful events like when you’re running aground or a storm is coming.”

On to bigger seas

After returning from that first long voyage, the couple decided to make a change. For months they scrimped and saved. Then as summer approached again, they sold their belongings (including their house) and got back on the boat. They were headed for the Bahamas by sailing through the Great Lakes and down the Atlantic coast-a 5,000-mile journey that took a year to complete.

“We grew up a lot on that trip,” she said. “On a boat, you deal with intense decision making. Sailing is a vehicle for bringing out conflict. It tests your trust and your vulnerabilities.”

On the other hand, sailing also allowed the family to spend quality time together. “On the boat, we spent time being together,” Gordon said. “We weren’t necessarily doing anything, but we were existing together. We were present with each other.”

Now, the Gordons are back in Minnesota, and living on dry land in Two Harbors. Being home, Gordon said, is a constant struggle to simplify and live outside the box. She doesn’t want to get pulled back in to a consumer-driven lifestyle. “I don’t want to feel trapped by my lifestyle,” she said. To that end, she and her husband have chosen to homeschool their girls, who are now 6 and 8. This decision will allow them to pack up the boat and take off for another adventure, which they are planning to do in 2012-destination as yet undetermined, but “definitely with some Atlantic Ocean sailing time.” In the meantime, the family takes tourists for sailing adventures on Lake Superior.

Once in a while, Gordon said, she comes across someone who questions her choice to resist life on land. For the most part, however, people respond with interest. “These days, I think there is a general questioning of the standard American life,” she said. For her own part, Gordon no longer questions the validity of her lifestyle. Her sailing adventures have, she said, “changed me personally forever.

“My global self has become more a part of myself,” she said. Sailing has put her in touch with her own values and with other cultures. “I feel an urgency, for me and for my girls, about seeing something other than an upper-middle-class life,” she said.