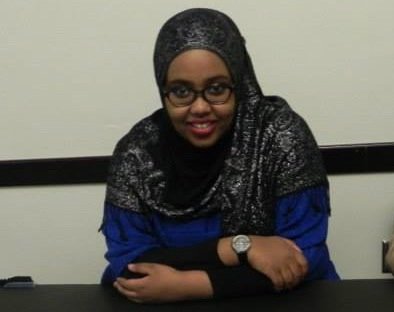 University of Minnesota first year student Saida Mahamud is the kind of person to take on issues of social justice head on. Though she’s just starting out with her college career, she has already taken on leadership roles with some of the student groups she’s a part of, such as Amnesty International. A graduate of South High School, Mahamud attributes some of her success to Students Together as Allies for Racial Trust (s.t.a.r.t), an anti-racism student group at Minneapolis South High School that she co-chaired during her senior year.

Mahamud joined s.t.a.r.t. in her junior year, a couple of years after the group formed in response to boundary changes within the district. “I wanted to get more of an in depth look at race and how it affects us,” she said.

Through s.t.a.r.t., Mahamud was able to learn about concepts such as systemic racism and the disparities that plague our society, and how “we’re living in an era of Jim Crow,” she said.

Last year, when Mahamud was a senior, Kate Towle, the advisor for the group, asked her to be a co-chair.

“Being co-chair helped me to gain leadership instincts,” Mahamud said. “I used to be shy, but my junior and senior year, I started to find my voice.”

Some of the events Mahamud coordinated included a workshop at the November 2012 Overcoming Racism Conference, where she was a co-presenter. “Seeing my name in the program as a co-presenter —I felt legit,” she said. Mahamud also took a leadership role in other activities that s.t.a.r.t. planned, including events in the wake of several incidents that happened last year, such as the doll-hanging incident at Washburn High School (the s.t.a.r.t. students attended an assembly about the incident) and also the fight that happened in the lunchroom at South, spurring discussions about race throughout the whole school.

Now a student at the University of Minnesota, where she plans on majoring in Biology, Society and the Environment, Mahamud has tried out several student groups focusing on cultural identity and also on social justice. She has become a member the U of M’s chapter of Amnesty International. In February, she did organizing around an event featuring Occupy Homes member Antoine Martinneau. Because she had connections with people in the activist community in Minneapolis, Mahamud was able to secure the speaker through her networks.

Mahamud says her experience with s.t.a.r.t. at South has informed her work at the University of Minnesota, which she actually finds less diverse than her high school. “In a lot of classrooms, you don’t see people that look like you,” she said. “It made me aware of who gets to college.”

Instead of majoring in biology, her original plan, Mahamud has set her sights on a major that combines her love of science with a social activism piece, where she’ll be able to find a career in public health and take on health disparities that persist in society.