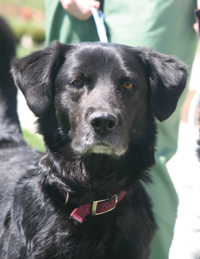 Pet Crossing provides a safe place for animals displaced by domestic violence, like this dog.

When Rose Moya fled her home and an abusive partner with her 17-year-old son four months ago, she didn’t want to leave her two dogs behind.

But once they were out of the house, Moya (who asked that her name be changed in this article to protect her identity) couldn’t find a place that would shelter them all.

She and her son initially found refuge at Alexandra House, a battered women’s shelter in Blaine, but her dogs ended up at the Animal Humane Society. Moya worried that her dogs would be adopted before she could find a new home and she would never see them again.

But then a volunteer at Alexandra House connected Moya with Cornerstone, a domestic violence agency, and Pet Crossing, a Bloomington-based veterinary clinic that offers temporary shelter for pets displaced by domestic violence.

“While the mother and children are getting help at Cornerstone, the dogs and cats get help here,” explained Dr. Kate Knutson, one of the founders of Pet Crossing.

Pets at risk
The partnership, which is the only arrangement of its kind in the metro area, grew out of an understanding of the role pets play in an abusive household. Abusers sometimes threaten to harm animals as a way of controlling their victims, and victims sometimes stay in unsafe situations because they don’t want to leave pets behind.

“We heard stories of women who came home to find their pets maimed or dead,” said Susan Neis, executive director of Cornerstone. “The inspiration [for the program] was to remove barriers for getting help.”

“For a lot of people your pet is part of the family. People are not going to leave if they know their pets are still there,” Knutson said.

Neis pointed out that if pets are left in an abusive situation the family is much more compelled to go back, even if it isn’t safe. “Someone who is abusive will use every tactic to manipulate,” she said.

When the partnership began, Pet Crossing hardly had room to take in more boarders. The old clinic was the size of small apartment. But the staff managed by taking the animals home at night. Three years ago, they moved to a larger building, which offers more kennel space to board pets, heated floors and an additional waiting room.

A safe haven
Last year, Moya and her son moved to the Twin Cities to be with the man with whom she had a six-year long-distance relationship. Once she arrived, he began physically abusing her. In late December, he broke a full-length mirror over her head. “We left with what was on our backs,” Moya said.

They moved to Cornerstone in early January, and the dogs moved to Pet Crossing. While Moya and other abuse victims work to get their lives back on track, Pet Crossing’s staff works to heal their animals.

The staff treats animals for injuries and stress. Pets will often arrive scared of noises and of men, and they may be skittish or even violent toward people. After they adjust to their new surroundings, the staff plays with them to win their confidence.

“We start reteaching them life is a good thing,” Knutson said.

Once they’re acclimated, the pets are allowed to wander the facility and interact with the other animals there. They also receive physical examinations and vaccinations, if needed.

Pet Crossing houses the animals for free for as long as victims need. They have cared for some pets for up to three months. In 2005, Pet Crossing provided free care for victims’ animals for more than 225 days.

“This is just one way we can make things better for the families and pets, because they are victims too,” Knutson said.