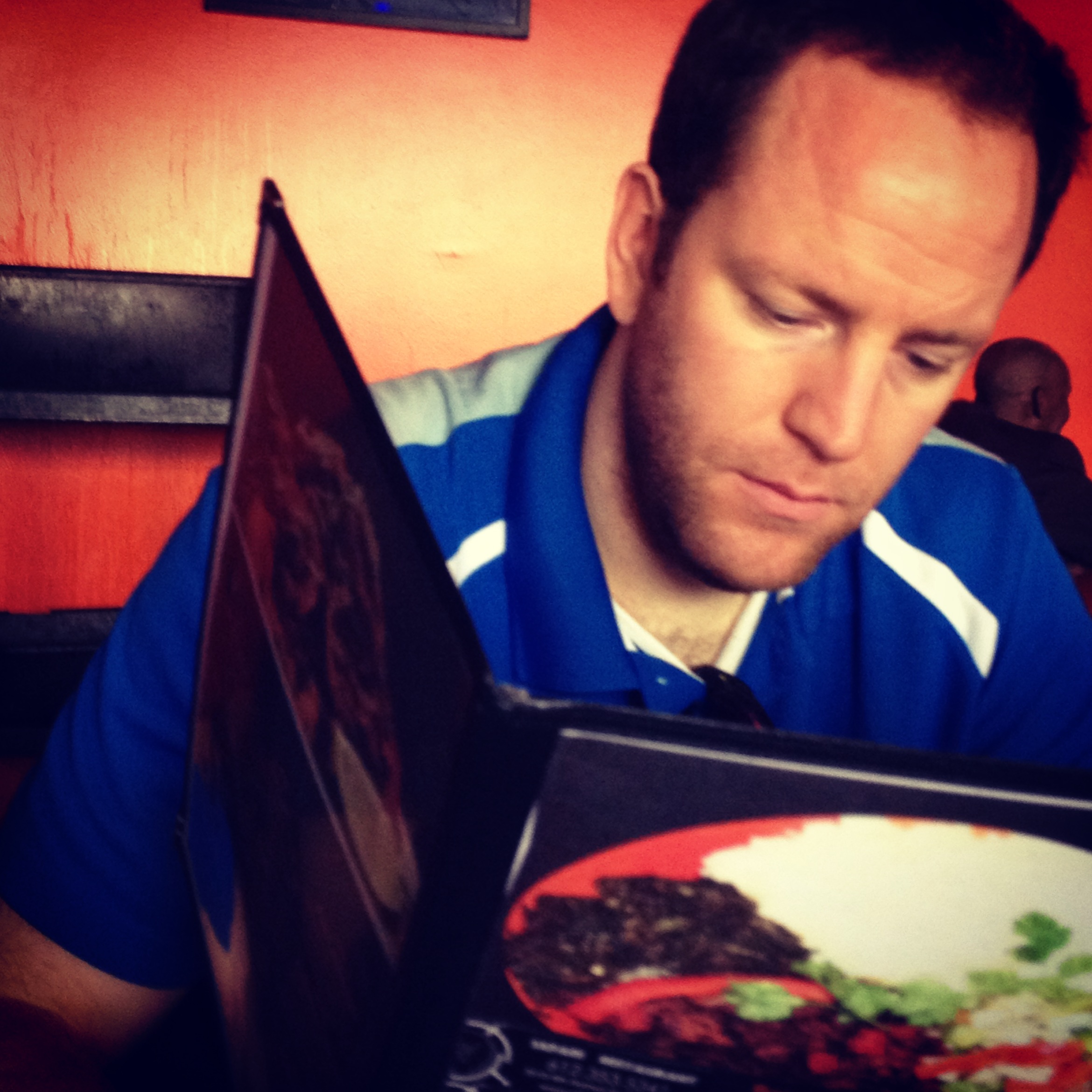 United Foodies of Minnesota scan the menu at Stop #5 on the Tour Around the World in the TC: Safari Restaurant & Event Center (Photo by Michelle Tran)

Growing up back home in the Horn of Africa, Safari Restaurant & Event Center co-owner Abdirahman Ahmed thought that pasta was traditional Somali food. In a sense, it was. Given the large amount of trade and influence from Italy, India, the Middle East, Far East Asia, and many other regions within Somalia, the cuisine represents a cultural blending of sorts. As the United Foodies of Minnesota sat down for dinner at Safari, we not only enjoyed pasta in the form of Safari’s unique creation of homemade noodles, ke’key, but also delighted in the sambusas (the Somali version of samosas) and basbaas sauce, a green hot sauce made of lime, chile, and coriander. As a spice lover, I ended up adding a little basbaas sauce to pretty much everything.

“There are three variables for what makes things tick when it comes to food,” Ahmed said. “It must smell good, look good, and taste good. Here at Safari we have three categories of food: traditional, contemporary, and something in between Somali traditional and contemporary. Traditional foods include goat meat, rice, sambusas, and soor. Contemporary food includes burgers and chicken wings. The Somali kids love chicken nuggets. In between are foods that have the texture, taste, and smell of Somali food, but have a lesser degree of spiciness, like Chicken Fantastic and ke’key.”

Soor is a soft cornmeal mashed with milk, butter, and sugar that is similar to Italian polenta or grits. Many of the dishes on the Safari menu are either served with soor, basmati rice, pasta, or mufo, a traditional Somali bread. Ahmed’s favorite dish on on the menu is Liibaan’s Special because he likes seafood. It consists of a salmon or tilapia fish fillet, spinach, hummus, pita or chapati, and either mufo or rice.

Because Somalia has a strong oral tradition, many Somali recipes were passed down from mother to daughter to sister for generations.

“We’re grateful for those strong women who kept up the traditions and taught us how to make good food,” Ahmed reflected, “I wouldn’t be here today if it weren’t for them.”

Ahmed did not always work in the food industry. About three years ago, he worked as an analyst for the State of Minnesota in the Office of Enterprise Technology.

He met his business partner, Sade Hashi, who had previously owned the Safari Restaurant in downtown Minneapolis, and together Ahmed and Hashi decided to open Safari Restaurant & Event Center in July 2010 in the Central neighborhood of Minneapolis’s Powderhorn community. (Safari Express, a spin-off from the original Safari Restaurant, is still operated in the Midtown Global Market by Sade Hashi’s younger brother Jamal Hashi.)

“What we didn’t know back then was that this would become such a community center,” Ahmed said. “It wasn’t in our business plan at all, but Safari has become a hub for the community. It’s not just a restaurant. We host weddings and meetings for delegates from Africa.”

“I have two dreams,” Ahmed said. “Number one is for Minneapolis to be the best city in the world. And number two is there to be a direct flight from Minneapolis to Mogadishu within five years.”

Although the United Foodies of Minnesota were not able to fly to Mogadishu, we certainly had a good taste of the variety and diversity that enriches the palette of Somali cuisine. Stay tuned for our next stop on the Around the World in the Twin Cities Tour as we venture into Southeast Asia for dinner at Peninsula Malaysian Cuisine. If you’re interested in joining our group, please let me know!