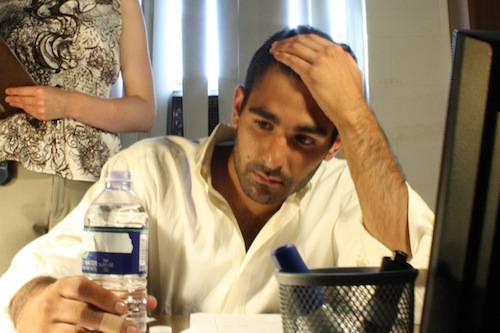 Walking Shadow Theatre Company‘s new production Saboteur is both a spy caper and a set of puzzles solved by the audience. So I run the risk of spoiling the plot on two levels here. I shall tread lightly. It gives away nothing to admit that the show is a lot of fun, and not the least bit intimidating in the way I would normally expect “audience participation” and working with a bunch of strangers would be. (I quite enjoyed Walking Shadow’s last puzzle theater outing, 1926 Pleasant, so I knew I was in good hands.)

Honestly, I was more worried about finding the place, since my tendency to get lost on seemingly simple journeys is legendary among my friends. I gave myself a nice cushion of time to get lost in, and didn’t need it at all. The formerly undisclosed location is on 2010 East Hennepin Avenue (a more central thoroughfare you couldn’t ask for), with plenty of parking right behind the building (and ample directions, maps and pictures available on the Walking Shadow site). Plus they have their famous shadow logo guy on a sign out front, and a Walking Shadow company member hanging out in the entryway, just to make it super obvious. Getting there is the least challenging puzzle of the evening. Phew.

There are multiple rooms, with multiple layers and multiple puzzles in each. There is a coordinator (Jennifer Probst—how she keeps a straight face throughout the night, I don’t know) who greets the audience as they arrive and checks them in. Since the front company for this spy caper is Universal Hydro Solutions, there is plenty of complimentary bottled water on hand, and encouragement to stay hydrated. The water is perfectly safe, of course, but even it holds a secret. All shall be revealed in time.

The coordinator also helps guide the small group through the evening. Because puzzle solving can be unwieldy in too large a group, the audience size is limited to 15. That’s part of the reason they have multiple shows throughout the week, with two on Saturdays: to make sure as many people can see the show as might during a normal run in a regular theater space.

There were two clusters of people in my audience that clearly knew each other, and then a couple of singletons like myself. Group dynamics are always interesting: the people who take charge, the people who have a hard time speaking up, the people who take it all very seriously, and the people who think it’s a hoot. And of course there’s always the danger of making a puzzle more complicated than it’s actually supposed to be. Walking Shadow had a few test-drive audiences to see how they’d “break” the show, so they could make adjustments. My group ran afoul of a completely new wrinkle that they’ll smooth over for the next crowd. They expect to keep tinkering with it, to streamline and enhance the audience experience, well into the run.

Puzzle creator David Pisa knows his stuff. The puzzles are challenging, but not inscrutable. There aren’t really that many instructions. Things are just clearly marked and simple signs are posted here and there. An audience can blunder its way to a quick solution if everyone’s minds are open. There’s always someone who will figure out what that last missing piece is, because there’s always a watcher in any group who hangs back while everyone else digs in. The first puzzle and its solution is staring right at you upon your arrival, but you don’t realize until the actual pieces of the puzzle are presented to you when the show begins.

There are codes to be cracked and puzzles to be constructed, mazes to be run and locked boxes to be opened. There are surveillance videos and death traps. There is a handler named Brinsley (Aayush Chandan) and a secret agent named Julia (Emma Gochberg). There is love and betrayal and, of course, the occasional double or triple cross. Director Amy Rummenie, company playwright John Heimbuch and the actors all assisted Pisa with the fleshing out of his story and it’s a fun little trifle. Saboteur skips happily through many of the standard twists and turns of the spy genre. Yes, evil masterminds are plotting to rule the world and things seem dire, but they wouldn’t really erase my memory. Or would they?

Fear not: the fourth wall, while flimsy, remains in place. Though the actors will address you as a group, you will not be enlisted as a performer in the larger story. How could you be? You don’t know what the heck’s going on. Sometimes, neither do the characters who are actually in the play. Oh, just for fun: Ruritania. Look it up.

Saboteur is a fun way to spend a summer evening. Run time depends on how quickly you solve the puzzles, of course, but it clocks in around an hour and a half. Just don’t overthink, and don’t be afraid to speak up (or dig in).