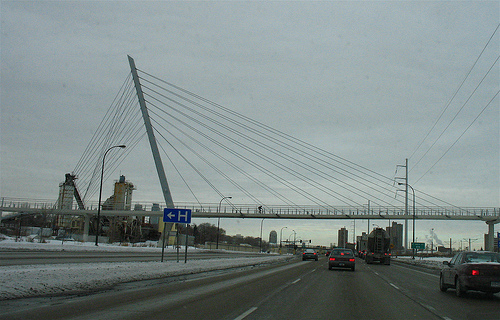 Nobody knows when it will be fixed. Or exactly what went wrong. But here’s what some interested people, some smart people, some angry people, and some official people have to say (and you can sort out which ones are which.)

Excerpts of one of several discussions on E-Democracy:

Sheldon Mains: As a former professional engineer (while not structural engineer–did take a couple classes in it years ago):  I’m guessing there are three potential places were something went wrong:

Design–either the cables or the brackets  holding the cables.  No structural engineer would purposely design something that could break in five years–even without any maintenance.

Fabrication–the companies that supplied the cables or the brackets holding the cables.  The design could have been fine but the supplier didn’t follow the specifications (this could include poor weather-proofing, the wrong strength cable strands, the wrong steel strength, the wrong wrap tension……)

Installation–the companies the put the bridge together.  The did something wrong, nicked the cables, set the wrong tension, put something on at the wrong angle, used concrete for the bridge deck that was too heavy……

Peter Tharaldson: I am not an engineer but I am a stats guy who works in probabilities (and I have done some risk analysis in the past).  There is no way the civil engineering fields could accept any math that allows for what happened today:  If the cables simply broke after four years it would have to be a design flaw.

I believe that risk analysis in the building industry is like it is in other’s….it must take into account different scenarios. Unless a small meteoroid fell out of the sky and struck the cable it would probably have to be a design flaw this early in its life. I think any engineer or designer that says otherwise probably isn’t thinking clearly.

Jim Graham: The wasted dollars could have created a huge amount of usable bike infrastructure if spent wisely. A true progressive liberal must be a fiscal conservative and NOT waste money. We know that if you waste dollars foolishly on fluff they are not there when REAL people have REAL needs. There are just so many of those dollars available and there are certainly those real needs. When I look at that bridge I just cringe thinking it is a monument to one of my favorite politicians of all time. Especially since only a few blocks away there are homeless poor people. Families without proper housing. People without jobs. Martin’s body of work would have been honored more by spending the money more wisely.

Christine Brown: I used to live right around there. It’s a horribly depressing stretch, and the bridge makes it both inviting and pretty. Lots of pedestrians and cyclists are intimidated by traffic and don’t want to cross Hiawatha. The bridge makes it easy for less aggressive cyclists to get from one side to the other. And with all the industrial ick factor in the area, I think it deserves something nicer than ugly dying factories and graffiti. It’s a great place to sit and enjoy fireworks, or just sit and enjoy, period. We need more urban places that allow people to just stop and relax. People REALLY like this bridge!! And I think that’s a great thing.

I’m all for bike paths and help for the homeless, and I wasn’t even a fan of the bridge when it opened. I thought it was a huge waste. But it’s used all the time, and just in my own circle I was astonished at how many people decided to bike to the other side just because the bridge invited them to do so.

I hope they can get it fixed as I think it’s a huge asset.

From another E-Democracy conversation —

Charley Underwood: I was just a bit surprised to read, in both the Pioneer Press and the Star Tribune, that the company responsible for the I-35 bridge inspections before that tragic crash was the exact same company that designed the Sabo pedestrian/bicycle bridge that has become somewhat unmoored this week. The company is known as URS Corporation. Even stranger, the I-35 bridge collapsed the same year (2007) that the Sabo bridge was opened. The I-35 bridge collapse resulted in URS paying $53 million to the victims. The Sabo bridge cost $5.1 million.

Long story short, I got curious about the company, wondering if there was anything significant about these strange coincidences.

From the City of Minneapolis:

Feb. 22, 2012 (MINNEAPOLIS) City crews have installed two sets of the four support structures that need to be put in place on the Sabo Bridge, where a suspension cable connection broke loose late Sunday evening, Feb. 19. It is anticipated that the remaining shoring supports will be in place in the next day or two. Once all four sets of shoring are in place, it is anticipated that crews can safely begin the work to release the tension from a second set of cables that were also compromised. …

The City of Minneapolis and Hennepin County have contracted with Wiss, Janney, Elstner, Associates, Inc., a forensic engineering firm to assist in determining the cause of the failure. Understanding the cause of the failure will be critical to developing plans to move forward. The bridge was originally designed and constructed as a Hennepin County project and “ownership” was turned over to the City of Minneapolis after the bridge opened in 2007.

Because of safety concerns, traffic on Hiawatha Avenue will continue to be closed from 26th Street East to Lake Street. In addition, Metro Transit will continue to use buses to replace Light Rail trains serving Franklin Avenue, Lake Street/Midtown and the 38th Street stations. City and County bridge and engineering staff, in collaboration with Mn/DOT and Metro Transit, will determine when the bridge is stabilized enough to reopen Hiawatha Avenue to traffic and the Hiawatha Light Rail line. The Sabo Bridge itself will remain closed until repair work is completed. …