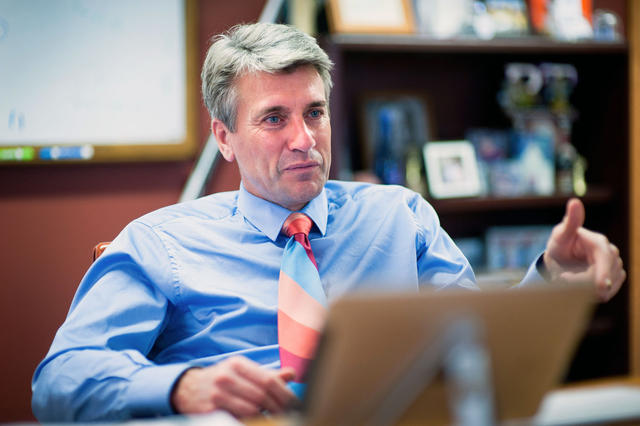 Minneapolis Mayor R.T. Rybak talks about his involvement with the University on Monday in his office at City Hall in downtown Minneapolis. (Daily File Photo by Mark Vancleave)

Minneapolis Mayor R.T. Rybak hasn’t said if he’ll run for re-election. When he does, his decision will impact the political futures of many others.

Several potential mayoral candidates have said they’ll step into the race should Rybak announce he won’t run for a fourth term.

Rybak currently serves as the vice chair of the Democratic National Committee. If he doesn’t run for re-election, many speculate he’ll continue in politics beyond Minneapolis.

“He’s been mayor for 11 years, and right now he’s thinking about whether this is the time for him to ask the residents of Minneapolis for four more,” said John Stiles, spokesman for Rybak.

Prospective candidates for the lead position at City Hall are keeping a close watch until Jan. 1 — Rybak’s self-imposed deadline for announcing his decision.

“The big story here is what happens if the mayor doesn’t run for re-election,” said Larry Jacobs, a University of Minnesota political science professor at the Humphrey School of Public Affairs. “You’re going to have literally almost every member of the City Council running or thinking about it.”

City Councilwoman Betsy Hodges has already filed campaign finance papers to run for the position, but she said she won’t go through with it unless Rybak chooses not to run.

“If the mayor runs, I’m going to support him,” Hodges said. “I’m 100 percent behind him, and I respect his timeline to decide.”

Hodges said her experience as chair of the Ways and Means/ Budget committee would continue Rybak’s effective fiscal layout for the city.

“Betsy Hodges is going to have an advantage because she can reach across the city better than some of the other council members,” Jacobs said. “She’s going to have the financial and organizational support to battle.”

On the other hand, Ward 9 Councilman Gary Schiff is considering running regardless of Rybak’s decision. He said he’s basing his decision on the amount of support he could build.

“I’m going through my own process of figuring out if people will support me,” Schiff said. “My decision will be based on the conversations that I have with people and hearing what they want in a mayor.”

Schiff is already exploring platforms he will run on if he decides to pursue a campaign. He said his commitment to creating jobs and supporting local businesses are his strong points.

Also, a strong partnership with the University will be a leading component in moving the city forward, Schiff said.

Schiff said he will make his decision to file to run for mayor within the next month.

Not just City Council members are keeping a close watch on the mayor’s decision. Other public figures have Rybak’s moves on their radar, Jacobs said.

He said there is a push to convince former Speaker of the House Margaret Anderson Kelliher to run, and there “are some very enthusiastic supporters.”

Kelliher ran for governor in 2010 but was defeated by Gov. Mark Dayton.

According to a report by the Star Tribune, Minneapolis’ school board representative Hussein Samatar — Minnesota’s first Somali-born elected official — will run if Rybak denies a fourth term, much like Hodges.

Known as an avid supporter for President Barack Obama, Rybak’s gig as vice chair of the DNC could open doors for his next move, Jacobs said.

Rybak was initially rumored to be nominated to lead the DNC, he said.

That idea was crushed last Monday when Obama asked the current chair, Debbie Wasserman Schultz to continue her position as the party’s head, according to the Star Tribune.

The nomination for DNC chair still has to be ratified in January.

Jacobs said if Rybak ends his run as mayor, he might pursue a job with the Obama administration if the position is “attractive to him.”

“It’s not going to be simply what R.T. wants; it’s going to be what the president can deliver for him,” Jacobs said. “If the Obama administration has something that R.T likes, I think he’ll be interested if it’s the right fit.”

While Rybak will make his final announcement in the next few weeks, Stiles said his plans are only speculation at this point.

“The mayor hasn’t had any conversations with anyone in Washington about whether or not he would be offered a job or if he would accept a job,” Stiles said.

Jacobs said whether it’s a new job beyond Minneapolis or if it’s preparing for a campaign for re-election, Rybak’s future is under close watch, and there are a lot of people “leaning on him.”

“I’ve heard from folks that are close to him that he is getting ready to move,” Jacobs said. “He knows that he’s got people waiting on him.”

If Rybak seeks a fourth term, he would surpass the city’s record, currently held by Donald Fraser with 14 years, as the longest serving mayor of Minneapolis.