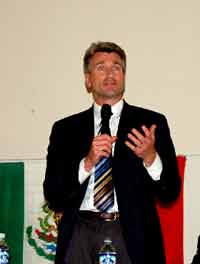 At yesterday’s press conference, those who packed the lobby at the Second Precinct in Northeast Minneapolis cheered Mayor R.T. Rybak’s announcement that he was nominating interim Police Chief Tim Dolan to run the department. It seems he’ll face a less celebratory reception at City Hall.

On September 27, Rybak will bring the nomination before the City Council’s Executive Committee, where three of the five members are either opposed to the nomination or have admitted serious concerns about Dolan’s performance or the mayor’s process. Those three members—Council members Scott Benson, Cam Gordon, and Robert Lilligren—could derail the nomination before it even comes up for a public hearing.

“I’m working hard to keep an open mind,” said Gordon. He has questions about Dolan’s leadership and organization, he said, and is looking for assurances that he will support council efforts to get an audit of the department’s Internal Affairs Unit and obtain legislative approval for the power to subpoena officers in cases of misconduct.

Lilligren said he has similar concerns, but is remaining officially neutral on the nomination. Only Benson has told colleagues he will oppose Dolan’s confirmation. Rybak and council president Barbara Johnson are the other two members of the committee. Johnson has said she supports the appointment.

But Gordon, who could be the deciding vote, said he’s hesitant to derail the nomination before the full council gets a chance to debate it. “I’m not sure it’s a good idea to kill an appointment without other council members weighing in on it,” he said.

And while that sentiment may allow Dolan’s nomination to squeeze through the first of several hoops, it won’t spare him the wrath of several council members who have expressed publicly their disappointed with either the process or the candidate or both.

Seven of the 13 council members—Betsy Hodges, Elizabeth Glidden, Gary Schiff, Ralph Remington, Benson, Gordon, and Lilligren—have all expressed some measure of discontent with Rybak’s choice. And Remington minces no words in describing his opposition to what he called a “perfunctory” process.

“Where’s the transparency?” he said. “He ramrods a nominee through when he doesn’t have community support.”

With crime spiking throughout the city on Dolan’s watch, Remington said he was amazed that Rybak refused to seriously consider Seattle Police Chief Nicholas Metz for the post. Remington talked with Metz on Tuesday and was surprised to learn the Seattle chief was a Minneapolis native, a graduate of Washburn High School who spent the first 21 years of his life in the city. “This is an African American candidate who is viable,” he said.

But it’s the process that really bothers Remington—especially coming from a mayor who has touted his openness and managerial skills through two elections and five years of City Hall wrangling. “He sets his jaw on issues, where he should be more open,” he said.

But the council will have its say in the end, he warned. “We’re not there to be R.T.’s staff.”