As recently as April 21, the Marshall Independent fretted that it was Time for candidates to step forward in the contest to replace moderate Republican State Senator Dennis Frederickson, who retires at the end of the session after 30 years in the legislature.

Neither a Republican nor a DFLer had stepped forward.

Two candidates have now presented themselves. The first is conservative Republican Redwood Falls businessman Gary Dahms, whose bio reads as if it stepped of a Sinclair Lewis novel. The other? Dental hygienist and anti-immigrant activist Ruthie Hendrycks of Hanska.

While Dahms announced his bid in the Marshall Independent, the Sleepy Eye Dispatch, and the Redwood Falls Gazette, Hendrycks went full Palin and announced her intentions on Fox News. 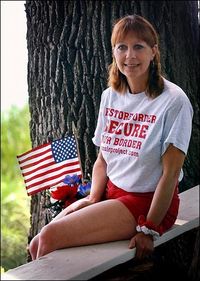 In From Minnesota to Georgia, Politicians Lend Support to Arizona Immigration Law, the fair and balanced cable network reports:

. . .Ruthie Hendrycks, president and founder of Minnesotans Seeking Immigration Reform, says Arizona’s new immigration law should be mirrored in Minnesota, where roughly 125,000 illegal immigrants lived as of 2007, according to some estimates.

“This issue of illegal immigration and addressing it is long overdue,” Hendrycks told FoxNews.com. “The situation is out of control, and until the federal government steps up to the plate to enforce our laws, the states have no other choice than to enforce federal law through state law.”

Hendrycks, a Republican who will announce her candidacy for state Senate later this week, said she plans to contact Minnesota Gov. Tim Pawlenty regarding her proposal. Hendrycks anticipates widespread support among the state’s residents.

The passing of an immigration reform bill, SB1070, has received a mixed reaction among politicians and residents in Arizona.


“Although there are voices on both sides of the issue, Minnesotans are not blind to what’s happening across the nation and how it is affecting them on a state level,” she said. “I believe that the majority of Minnesotans understand the issue and would be in favor of enforcing our laws.” . . .

Loyal readers will recognize Hendrycks as one of the organizers of last November’s Tea Party Against Amnesty at the state capital in St. Paul, an event that drew about 65 supporters and nearly 40 protesters.

The gathering would be long forgotten had it not marked the public debut of immigration activist Robert Erickson, whose speech to the crowd went viral on Youtube. The long version, which features  vintage Hendrycks:

She makes some wonderful contributions to public discourse throughout the clip.

Hendrycks has made two earlier attempts at public office. As Sue Jeffers’ running mate in a 2006 primary challenge to Governor Pawlenty, she received 11.13 percent of the vote on the Republican ballot. In 2008, she sought the GOP endorsement for the open house seat in HD21B, and collected a mere handful of votes.

In 2008, Bluestem looked into her degree from LaCrosse Unversity, a diploma mill so disreputable that it was de-certified by both Louisiana and Mississippi. Not long after, I looked at the legal status of MinnSIR, which appears to simply be an assumed name under which Hendrycks does business.The group is not a nonprofit nor does it issue annual report. Membership figures are unknown.

Fox News cites her as a credible source and candidate. Draw your own conclusions.