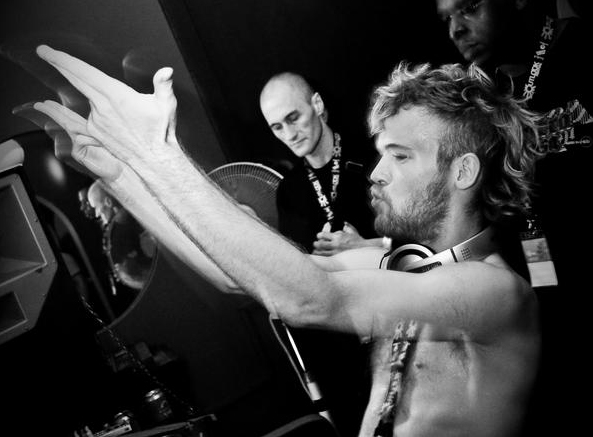 I am a major fan of electronic music, and I have an embarrassing problem: I have no idea what dubstep is. Though I’ve heard it buzzed about from countless people and media outlets, and despite my best attempts to figure it out, Google it, YouTube it, and ask every DJ I know (trust me, there are a lot of them), I just don’t get it.

The feedback I got was consistent but unenlightening: “It’s wobbly.” “It’s nasty.” “You know, WOMP WOMP WOMP.” Right. So when I got the chance to ask Rusko, the dubstep DJ extraordinaire who will be descending upon First Avenue on Wednesday, 4/20, I jumped at it.

Rusko is UK-born Christopher Mercer, a 26-year-old producer and DJ best known for his association with dubstep and often credited for its recent rise in popularity. When I spoke with Rusko, he had just recovered not only from dental surgery the previous day (he had three teeth removed, ouch) but also some sort of bizarre finger-burning-while-rehearsing incident that afternoon. Medical drama notwithstanding, he spoke enthusiastically about his upcoming tour, his musical influence, and, well, weed.

First things first: I asked Rusko to tell me what, exactly, is dubstep. “What exactly is dubstep?” he repeated. “Whoa.” He quickly recovered from his apparent shock at the breadth of my inquiry (or my baffling ignorance, one or the other), and explained that “dubstep is kind of like an amalgamation of the last 20 years of dance music all smooshed together, with the bass turned up. It’s all about the bass.” Finally, a description of dubstep that uses real words!

By most accounts, dubstep as a genre originated in the United Kingdom, in Southeast London to be precise. For this reason (and maybe others) I’ve often heard it said in the electronic music community that UK dubstep is “real dubstep” and American dubstep is simply not. Rusko disagrees, saying that dubstep is “a genre born in the age of blogs and the Internet and has always been worldwide.” He described how other types of electronic and house music originated before the Internet and thus are meaningfully related to the geographical region they come from, whereas online music culture picked up on dubstep at its inception and quickly made it an international, placeless phenomenon.

Being such a specific type of music (many sources refer to it as a “microgenre”) and given that it’s reached almost meme-like buzz status on the Internet, I wondered whether dubstep was simply a trend in electronic music, rather than an enduring genre. Rusko thinks it’s probably around to stay, describing that “it’s a unique tempo” and more precisely that “there are lots of variations of house music that’s all like 125 bpm with the 4/4 beat, but dubstep has its own tempo rate and has its own space.” (For the music-savvy, dubstep tracks are typically 140 bpm, cut time.)

It’s clear that Rusko certainly knows his stuff. Before becoming involved in electronic music, he played the bass guitar, saxophone, and piano in reggae and ska bands. Eventually he wanted to make dub electronic music and began recording a solo project. He’s pleased to no longer be in a band with other people, as he is a self-described control freak, a detail that’s easy to detect in the precision and intricacy of the mixes in his 2010 debut O.M.G.

That said, we may not hear too many O.M.G. tracks when Rusko comes to town on Wednesday. He’s coming off of a three-month break during which he recorded new material, and explained that he’ll be using crowd feedback to determine what will make the cut on his forthcoming album, due out at the end of the year—as long as he doesn’t have to totally start over, he notes.

In addition to the anticipation of new material, those attending the show on Wednesday will be greeted with what by all accounts is a pretty amazing visual set. “The new show is absolutely crazy,” he excitedly explained. “We have a full stage set, a raised DJ booth where you can see my feet, huge R-U-S-K-O letters, hydraulic cannons, steam cannons…it’s going to be insane. They are nine-foot letters, hydraulic and pumping up and down. Basically everything we can throw on it we have.” In fact, he said, they are taking a whole extra truck on the road just to fit the stage set.

Speaking of insanity, I couldn’t help but point out to Rusko that he’ll be in town on April 20th, which just so happens to be popularized in certain communities as “4/20,” a date that typically commemorates the smoking of marijuana (perhaps the most pedantic description of “420” ever written). When asked whether he had any plans to celebrate the “holiday,” Rusko perked up, exclaiming, “Oh my gosh, I always celebrate! I did last year and it’s so funny because I didn’t know about it ‘til I moved to the United States. No one knows about it in Europe.” Rusko went on to insist that he will certainly be celebrating “in style” and that every member of his crew is “420-friendly” (including the lighting and tour managers, he assured me twice), adding that “everyone on the bus” would be commemorating the holiday and promising a “cloud of smoke over the DJ booth.”

Whether you’ll be celebrating along with him or are simply looking to ride an intense weekday ravewave, Rusko’s show will be the place to be.