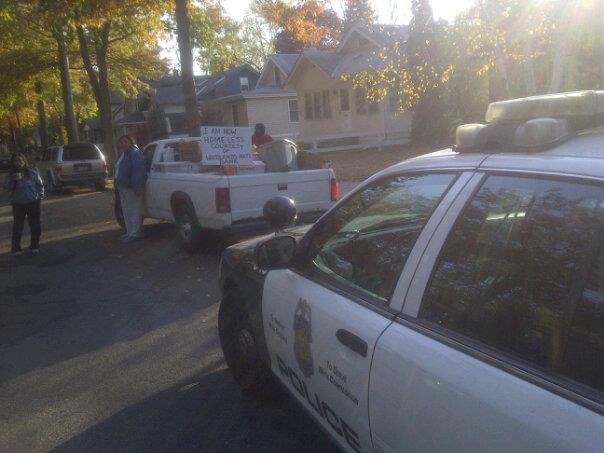 RULING IN FAVOR OF ANITA REYES LATE YESTERDAY – EVICTION ORDER HAS BEEN STAYED BECAUSE EVICTION PROCEDURE DEEMED ILLEGAL.   ANITA SLEPT IN HER HOME OF 17 YEARS LAST NIGHT AFTER BANK TRIED UNSUCCESSFULLY MOVING HER BELONGINGS INTO STORAGE. NOW THEY HAVE TO MOVE HER BACK IN.

Recent background and chronology:  On Tue Oct 16, Anita was awakened in the morning by three troopers from Hennepin County who arrived to evict her.  Woodlands National Bank president Ken Villebro appeared, along with Minneapolis Woodlands branch manager Joanne Whiterabbit.  The bank brought in tow a realty firm contractor, locksmith, moving packers and a moving company.  By late afternoon, after some seven hours of packing and removing Anita’s possessions, Woodlands then summoned the police, complaining that Anita’s friends and supporters were interfering with the eviction.  The police left after talking with both parties, apparently deciding the bank’s complaint was unfounded.  A valuable piece of furniture had been damaged, and movers tried to prevent photo documentation of the damage, and a physical assault case is now underway, also related to the bank’s unsuccessful eviction attempt.  The bank boarded up the house by mid afternoon; and by day’s end, with the eviction ruled illegal, Anita was able to take down the boards and sleep in her home again.

Anita has a hearing Friday morning, followed by another at the end of November.  To  see more the the back story, please visit the change.org petition page listed in this article, tagged with a video document.  Also a facebook page has been created that provides updates at Occupy Woodlands National Bank – Minneapolis, on Facebook, http://www.facebook.com/groups/396204677099752/

To view or sign the petition please visit:  http://www.change.org/petitions/woodlands-national-bank-negotiate-with-anita-reyes-to-stop-her-foreclosure