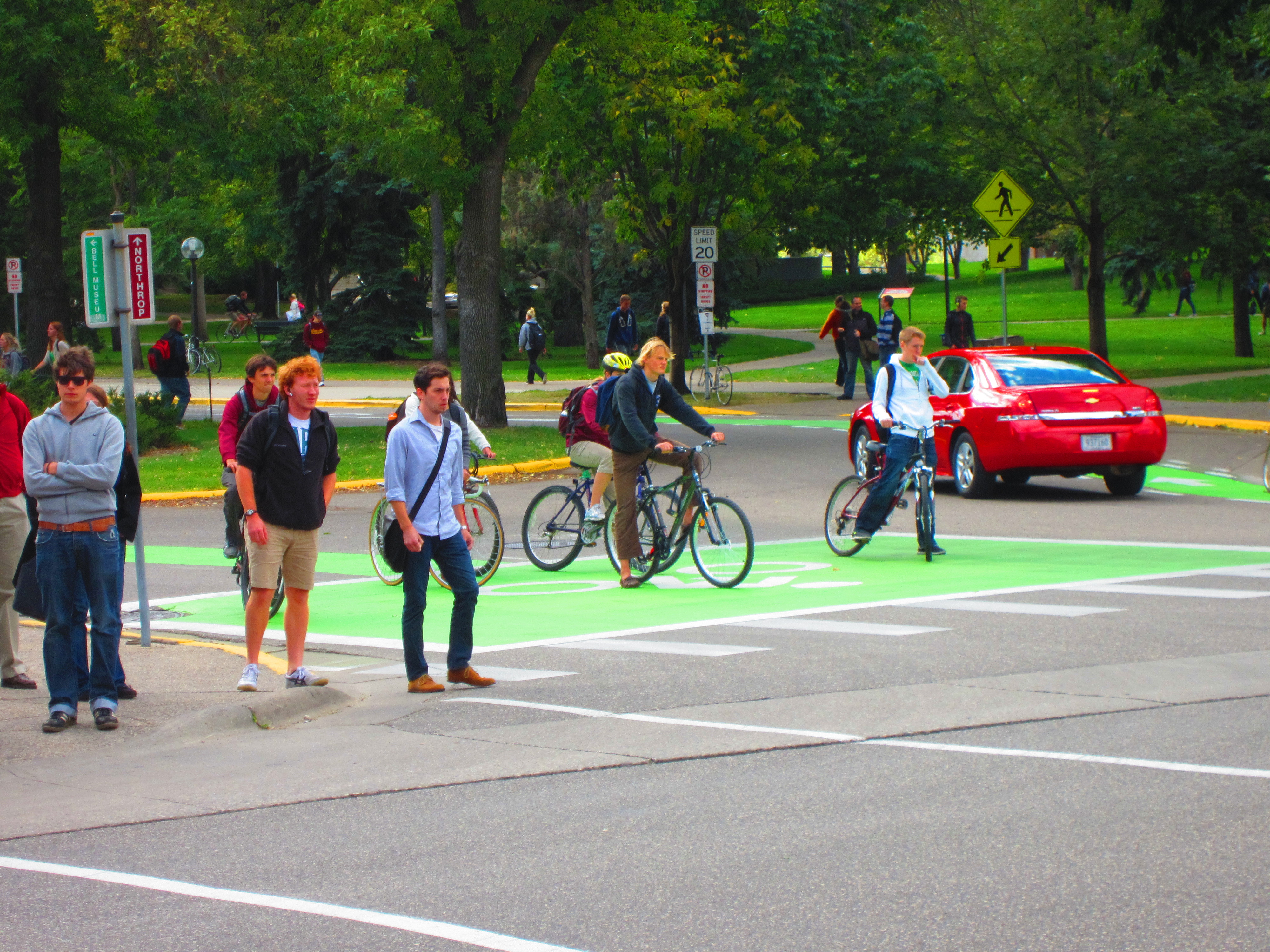 Commuting from downtown Minneapolis, I paused at the intersection of Bryant and Franklin Avenues. It’s a high-traffic intersection for cyclists on the “bicycle boulevard” to cross, and as cyclists and drivers alike know, there’s no traffic control. Waiting for cross traffic to slow, I nearly jumped out of my skin when a bicyclist passed me from behind at full speed. Her white shawl billowed and brushed my arm, and I flinched when she avoided a passing car by inches.

Standing long enough at a high-traffic intersection, there’s a high likelihood you’ll see a bicyclist sail through the stoplight or stop sign against traffic. To be fair, you’ll likely see twice as many who slow down, stop, wait for the appropriate traffic signal, and proceed to cross safely. But for all the cyclists who ride predictably, there are a few who – for one reason or another – follow their own set of rules.

“It’s one of our top complaints” says Shaun Murphy, Minneapolis Bicycle and Pedestrian Coordinator, of cyclists who run red lights through vehicle traffic. “Most of the bicyclists who don’t stop at lights aren’t doing it because the lights aren’t changing for them.”

Complaints about traffic lights failing to change for bicyclists – who don’t weigh enough to trigger sensors at some intersections – led to the institution of the Affirmative Defense Law for bicyclists in 2011. The law states that a bicyclist or motorcyclist who enters or crosses a controlled intersection against a red light has an affirmative defense against that charge, but only if:

a)      The cycle has been brought to a complete stop,

b)      The traffic control signal shows a red light for an “unreasonable time,”

c)       The signal is either malfunctioning or has not detected the arrival of the cycle, and

d)      No vehicle or person is approaching the intersection, and therefore does not pose a hazard to crossing against the light. 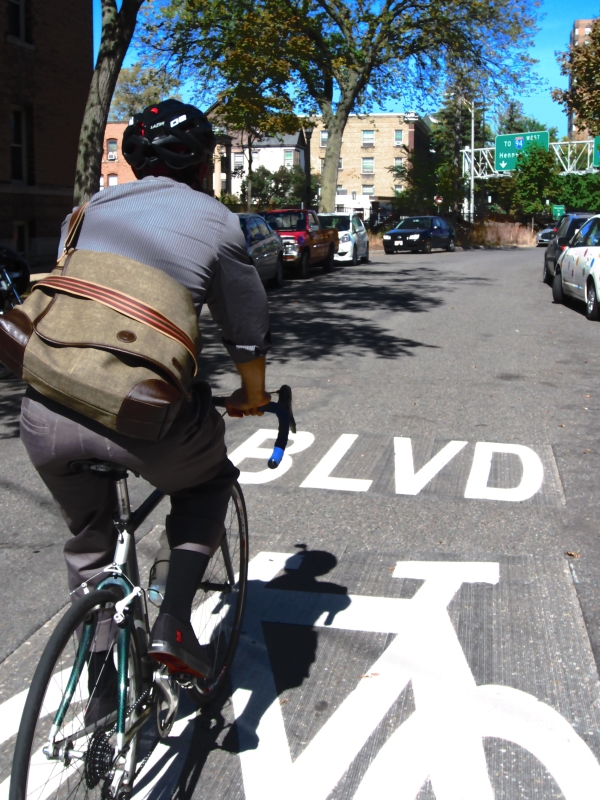 A bicyclist rides north on the Bryant Avenue “bicycle boulevard.”

But is this law heeded? If not, should we be concerned? Is it really that big of a deal?

“My argument is that it’s safer to run a red light on a bike because you’re paying attention and going slower [than motor vehicles]” says Mario Macaruso, a manager at the Freewheel Midtown Bike Center located off the Greenway in Minneapolis. “You have more time to respond on a bicycle and stop.”

“I’m honestly afraid that if I stop at red lights in downtown Minneapolis during rush hour, I’ll be run over by other bikers” says Ariel López, a downtown employee and daily bicycle commuter.

Soren Jensen, Executive Director of the Midtown Greenway Coalition, has a slightly different take on the cyclists who disregard traffic signals. “There’s always going to be people who don’t follow the rules,” he says. “Every day I see cars running red lights and doing very dangerous things.”

However, Jensen says that cyclists shouldn’t use the Affirmative Defense law as justification for running all red lights. “There’s plenty of [intersections] where it will change.”

Scott Beutel, a daily commuter from St. Paul to Minneapolis, estimates that he rides between seven and ten thousand miles per year. After a long pause, he says “I will run red lights, but only because they won’t change.” He says the Affirmative Defense law is not a viable long-term solution. “I’d rather fix the lights than create a defense for running them. The fear I have with a number of people not following the rules of the road is that it creates a climate of abdicating responsibility.”

“Motor vehicle drivers look at a few users [ignoring the rules] and wash their hands of the responsibility to share the road,” Beutel continued.

While collecting information for this story, I encountered a situation familiar to many bicyclists: While riding in the Minneapolis Park Avenue bicycle lane on the left side of the one-way street, a car turned left across the bike lane without checking for bicyclists. I hit my brakes hard, and came within inches of colliding with the car.

The Minneapolis Bicycle Advisory Committee has addressed this exact situation in many of its monthly meetings.  In fact, since the incident, Park Avenue has been re-paved and will be repainted with fewer lanes for motorized vehicles, a wider bicycle lane, and a “buffer zone” between the bike lane and nearby cars. The committee often advises the city on best practices to decrease incidents between bicycles and cars, as well as with other bicyclists or pedestrians.

And in many cases, it’s working. I staked out a spot at the intersection of University Avenue and 15th Street in Dinkytown during a particularly high-traffic time of day. I brought a camera and a notepad, hoping to count the number of bicyclists running those red lights in one hour.

That intersection is just a block from where a University of Minnesota senior was struck by a truck in an intersection and killed last year. Since then, bright green “bike boxes” have been painted in intersections encouraging bicyclists to wait at red lights in designated spots. The bike boxes transition into sinewy green bike lanes clearly indicating paths for cyclists and alerting drivers to the presence of bicycles. (For a description and photos of all the bike road markings in Minneapolis, see Bike lanes in Minneapolis: Everybody’s got an opinion.)

Better bicycling infrastructure is one way to decrease the number of accidents. But where does enforcement fit in? Would increased police presence and ticketing cull the amount of dangerous road behavior from both bicyclists and drivers?

According to the Minneapolis Fourth Judicial District Research Division, 194 citations were issued to bicyclists in 2010 for failing to follow traffic laws. That was down from 244 citations in 2009. In downtown Minneapolis, police officers on bicycle patrol Nicollet Mall during high-traffic times of day. Should their rides take them to other high-traffic bicycle crossings throughout the city, and should they be upping the number of tickets they give to ragamuffin bicyclists running red lights?

“I’d rather they patrol the alleyways and prevent bike thefts,” says Soren Jensen from the Midtown Greenway Coalition. “They have limited resources and time. As a Minneapolis resident concerned about crime, I don’t know if this should be at the top of their list.”

“Just like anything, we want enforcement [of bicycle laws] to be evenhanded and methodical,” says Shaun Murphy. “We don’t want the response to be just punitive. Other things have a role, like building roads right and educating communities.”

Scott Beutel says he doesn’t think the problem will solved solely through enforcement. “On the cycling side, it’s an education issue. People need to be riding in safe, predictable manners. I don’t want to let drivers off the hook, but I understand that when [bicyclists] behave unpredictably, safety becomes a further issue.”

Jensen says that with funding and a collaborative effort across like-minded organizations, it might be possible to undertake a massive public service campaign dedicated to safe road use.

He may be in luck.

With input from the Bike Advisory Committee, the City of Minneapolis will be releasing a report on the factors that lead to bicycle crashes within the next several months. According to Murphy, the report will highlight three factors which are contributing to crashes: First, crashes happen most at busy intersections. Second, crashes happen when bicyclists don’t ride in a predictable manner. Third, crashes happen when motorists don’t see or yield to cyclists. Murphy says the city will use this report to create a media campaign for safety.

“People always think it’s getting worse, but it’s not” says Murphy. And he’s right. The number of bicycle-motor vehicle crashes has decreased almost every year since 1997.