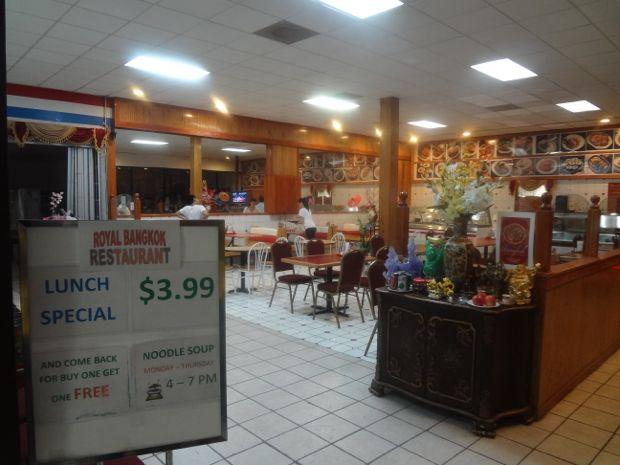 Arguing about which is the best Thai restaurant in the Twin Cities is a favorite foodie pastime. Each of the Uptown Thai restaurants — Chiang Mai, Roat Osha, Amazing Thailand,  Tom Rup Thai — seems to have its fan base, and so do Sawatdee, True Thai, Ruam Mit and all the rest.

If you have an opinion about which Thai restaurant is best, I have a poll for you – click here to vote for your favorite, and share your comments about local Thai dining options. (This is a bit of an experiment for me, since I have never used the Daily Planet’s poll tool before.)

To be perfectly honest, I’m not really qualified to say which Thai restaurant is best, because I haven’t been to most of them in years. A few years ago, I got a tip from a reader who had lived in Thailand, recommending the Bangkok Thai Deli, and when I visited, it was love at first bite. The flavors were lively and fresh, and the fact that the restaurant always seemed to be packed with Asian customers, seemed to vouch for its authenticity. As local Thai restaurants go, it seemed to be in a class by itself. In addition to the great Thai cuisine, it had a lot of funky charm – tucked away behind an Oriental supermarket, with Thai music videos playing non-stop on a television.

For a year or two, Carol and I regularly made the trek to the far end of St. Paul’s University Ave. to dine at Bangkok Thai, until I discovered that the owners had opened a second restaurant, Krungthep Thai, at 2523 Nicollet, in Minneapolis. That ended the treks to St. Paul, as we became semi-regulars at Krungthep.

On our more recent visits, though, Krungthep hasn’t seemed quite as good as it was when it opened, though still worth an occasional visit. And my most recent visit to Bangkok Thai Deli was also a bit of a disappointment – they had just relocated from their dilapidated back-of-the grocery to a former Burger King a few doors down at 333 University, and some of that funky charm got lost in the process. But one disappointing visit — really, just a couple of dishes — isn’t much to judge by. I’d still rank Bangkok Thai Deli at the top of the local list.

But last week I discovered a new Thai-Cambodian-Laotian restaurant, Royal Bangkok, in the former Bangkok Thai location at 315 University Ave. A lot of the decor remains the same, including the old food photos and the TV playing Thai videos. And many of the same Thai dishes are still offered, along with some Cambodian and Laotian dishes (very similar to the cuisine of northeastern Thailand.)

On our first visit to Royal Bangkok, we had a bit of that same oh,wow experience that we had on our first visit to Bangkok Thai Deli. Though we only tried a handful of dishes, they were all excellent. I always order som tam – spicy green papaya salad with lime and chilis and fish sauce — in Thai restaurants, but Royal Bangkok offered a more intriguing option — spicy green mango salad with dried shrimp. This was milder than the typical som tam, and with a hint of mango sweetness, but just as lively.

The steamed curry fish custard in banana leaf (hor mok) was as savory as any I have had in recent memory, and the green curry with shrimp was intensely flavorful, with generous quantities of shrimp and bamboo shoots and Thai eggplant  in a robust, spicy-but-not-just-spicy broth. (I won’t deduct points for the use of Western-style broccoli – why should Asian chefs be restricted to an approved list of “authentic ” ingredients?) My Cambodian sour beef soup flavored with tamarind and lemon grass had a very different flavor profile, but was equally enjoyable.

I have been back a couple of times since for their lunch buffet, which I have to rank as the best Thai buffet I have ever had – actually, the best lunch buffet of any kind I have had in recent memory. And the price is amazing — $3.99 for any five items of your choice. (It’s not all-you can eat – you choose, and they serve. But the portion is ample.)

When I asked the owner’s daughter how they could afford to offer the buffet for such a low price, she said that it was a way to introduce the restaurant to new customers, but that she expected that they would keep the price at $3.99 for a couple of months. The noodle soups are another great deal — from 4 to 7 p.m., it’s buy one, get one free — either bring a friend, or come back for the second bowl of soup on the house. (Most are priced at around $5.99.)

At any rate, I don’t know yet whether I would rank Royal Bangkok with the best in town, but it’s definitely worth a visit.

And if you have an opinion about the best Thai restaurant in the Twin Cities, be sure to take our poll. I’ll keep it open for a couple of weeks.