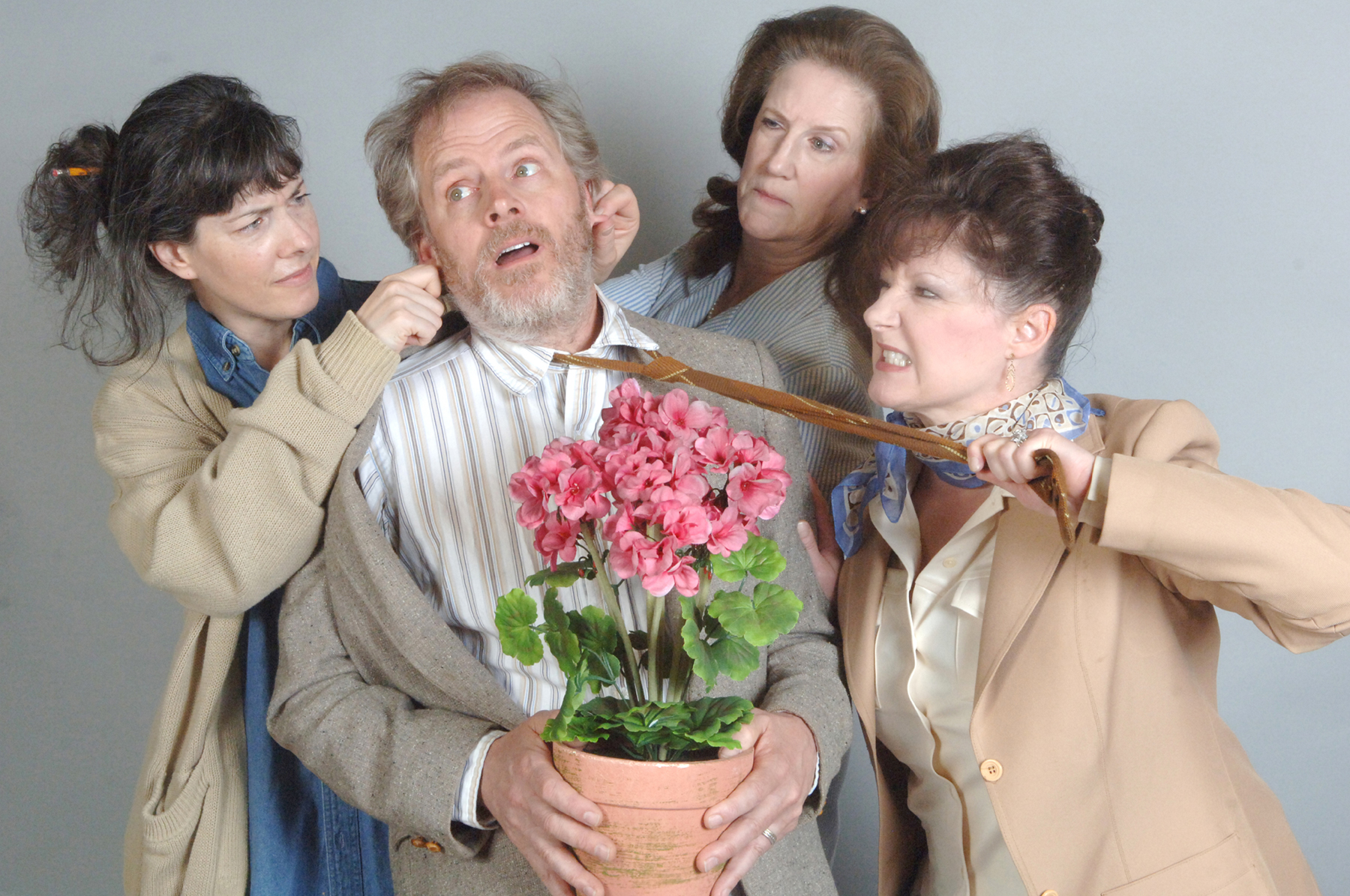 Photo © Act One, Too, Ltd., courtesy Theatre in the Round

Acclaimed British playwright Alan Ayckbourn’s modest, intermittently entertaining comedy Round and Round the Garden received an adequate production at Theatre in the Round, closing TRP’s 60th anniversary season. The last installment in Ayckbourn’s celebrated trilogy the Norman Conquests, Round and Round the Garden presents a half-dozen family and friends whose lives are twisted around the dalliances of a witless reprobate.

Annie is waiting for clueless neighbor Tom, her cat’s veterinarian, to wake up, smell the coffee, and make a romantic move on her. She has been waiting. And waiting. In the meanwhile, Norman starts to look good to her. Problem is, he’s incurably self-centered, insensitive, inconsiderate and, to truly top things off, married to her sister, Ruth. She is planning to take off with him for a tryst when everybody lands on her doorstep at the same time. Her brother Reg and his wife Sarah, Ruth, Tom—and, of course, Norman, who is ahead of schedule, barges in like a brainless bull in a China shop.

The amusing premise holds a world of promise. For which the playwright should be sued. Ackybourn phones it in, coming up with a legitimate chuckle here and there. For the most part, though, we wait for the comic payoff that never comes. In fact, the second act, at one point, collapses in clownish slapstick that, even for broad humor, is entirely farfetched.

John Gaspard capably directed a reasonably sufficient cast of John Adler (Norman), Muriel J. Bonertz (Sarah), Amy Shomshak (Ruth), Kelli Gorr (Annie), H. William Kirsch (Reg), and Rick Lamers (Tom). Rick Lamers, in fact, did a beautiful job of Tom’s stumbling and bumbling around, trying to figure out his asterisk from his elbow when it comes to putting a little love in his life. Amy Shomshak gave Ruth understated gravity, grounding the script and providing welcome contrast to the hapless antics around her.

Alan Ayckbourn can and has done a lot better than this. For instance, Absurd Person Singular, a hilarious skewering of snobs who hold social standing dearer than life itself. Indeed, where he managed to render snooty snots at least somewhat sympathetic, there is nothing at all likeable about Norman. Which leaves a one-note character whose self-centeredness makes you wonder what in the world Annie sees in him. And why Ruth hasn’t long since kicked him to the curb.

Strictly for diehard fans of Alan Ayckbourn, Round and Round the Garden is not recommended for anyone interested in more than pedestrian fare.