Ramiro Sanchez-Maldonado, the youngest of six children, was only four years old and living in Mexico when his mother died. The family moved almost immediately to the Twin Cities, but there were family problems – his father was drinking to excess and his brother started getting into trouble. “My brother was hanging out with the wrong people,” Ramiro said. So in 2002, only two years after moving to Minnesota, Ramiro and his brother were sent to live with his older sister in Arkansas. “My family though we’d have a better life in a small Arkansas town, away from bad things,” he said.

While his brother continued to have problems, Sanchez-Maldonado was thriving. He’d become fluent in English, made friends and was doing well at a high achieving school. “But, I liked being in the city. I dreamed of coming back to the Twin Cities and in 2010, I did.”

This is the second of four articles about the winners of the 22nd Annual Beat the Odds Awards, telling the stories of local high school seniors who have overcome great hardship through determination and courage and who are now headed toward college and continued success. Look for the others in the Twin Cities Daily Planet.

Today, he is a senior at Minneapolis’s Roosevelt High School and has done well enough to be chosen for one of four Beat the Odds scholarships. He’s the president of the school’s chapter of the National Honor Society, a co-captain of the varsity soccer team and is a student member of the school’s leadership team. He’s also an active volunteer, helping with charitable fundraisers and organizing the school’s blood drive.

“I’m interested in studying chemical engineering,” he said. “I’ve worked in construction, done roofing and dry wall helping my uncles and cousins. I like that work. It interests me. But I want to have a dream family and if I want a good lifestyle, I have to get a degree. I want a bright future.” 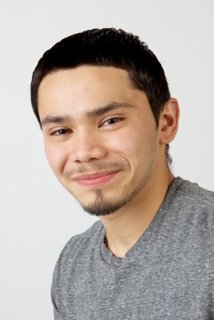 Maldonado said that his sisters have stuck with him through the hard times, keeping him focused on what’s important. “They understood how I was depressed and they motivated me.” His girlfriend Sheyla has stuck with him as well. “I’ve been stressed, but she’s been there with me. She listens to me and helps me out. I’m hoping that she can go to college, too. I’m trying to help get her credits up and to help her succeed.”

He is narrowing down his college choices, focusing for now on the University of Minnesota. His final choice hinges on finances and he’s looking for other scholarship opportunities to help cover expenses and tuition. “In college, I hope to learn how to be a responsible adult. College is about being self-disciplined and I want to learn this to get ready for life,” he said.