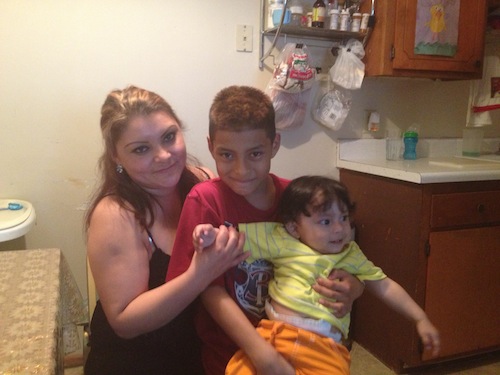 Catalina and her two children (Photo by Sheila Regan)

A number of Erika’s neighbors have moved away now. Her apartment building, located on Pillsbury Avenue in the Whittier neighborhood, was purchased by Mint Properties in November of last year, and many of her neighbors were sent letters that they needed to move out, in order for the landlord to make renovations. Fearful that she still might receive a letter, Erika has been looking around, but it’s hard to find a place in the neighborhood as rental prices are rising.

The current listed price on Mint Property’s website for the building is $625 for a studio, or $745-790 for a one bedroom, a jump in price from what the tenants had been paying for their families to live. Erika says that as new tenants move in, they are for the most part single adults, with no kids.

One family, couple Carlos Rivera and Yosenia Rosales and their three kids, are moving to the Central neighborhood. Through a translator, they said they had lived in the building for three and a half years, and had built strong friendships with the other families in the building, who would often look after each others’ kids, which was especially important for one of their children, who has autism.

“He knows this area,” Rivera said. “Everyone watches out for him. If we have to move, he has to get used to a whole new place.”

It was a convenient place to live too, as it was near Rosales’ work. “What we say is, sure, the apartments have been shabby,” Rivera said. “If you have to remodel, let us move to a new apartment at a reasonable price, and respect the community we’ve built up here.”

Another of Erika’s neighbors, named Catalina (she, like Erika, asked that her last name not be used) had lived in the building for five and a half years. She received the same letter as Rivera and Rosales, but has yet to find a new place to live. “Everywhere they say that we have to get a two bedroom apartment,’ she said through a translator, because there are five in the family.

Catalina’s husband had brain surgery, and he had to take time off from work, so money is tight, though he has started to work again now.

She wants to find a new place, but doesn’t want to have to switch schools from Jefferson Elementary, where her children attend.

She finds the landlord’s entry without notice intrusive. “We feel we want to get out of here,” she said.

But she also realizes that her previous landlord wasn’t perfect. “The problem was that David didn’t fix everything,” she said. “The bathroom is pretty shabby.” But the previous landlord also didn’t ever raise the rent.

As I wrote in the Reporter’s Notebook post, Mint Properties owner Jim Rubino said that the company made the decision to start renovations on the apartments that were in the toughest shape, ultimately asking about a dozen people to leave, and giving them two months notice. Rubino’s position was that the building had been “pretty neglected for a long time.”

Rubino said that Mint Properties did have a Spanish-speaking employee on staff, and that they encouraged tenants to call the office for help finding another place in the neighborhood. The people I talked to received a letter written in English.

When I first posted about the predicament of these families, a couple of people weighed in on the issue. Writer Charles Quimby called it a tough issue, writing:

“Investors fix up places but want a return. Tenants want to stay but can’t afford the new rents and risk it happening again. The neighborhood may get ‘better’ but the lot of the individuals doesn’t improve and may actually get worse.”

Ben Kreilkamp, a landlord in South Minneapolis, said, “It’s hard to argue with the investment necessary to keep buildings in decent shape,” and called the tensions between property upkeep, codes, costs of investment, housing prices, and affordable rents “inevitable.” Kreilkamp reflected that on the face of it, “this sounds more like a story of low wages. These hard-working people should be paid well enough to pay market rents if they’re not exorbitant.”

Dave Snyder, from Legal Services Advocacy Project, suggested that the tenant write Mint Properties a letter, requesting that they be placed in another apartment until the renovations were completed, and then be allowed to move back in. He also suggested calling HomeLine, a nonprofit tenant advocacy organization for help.

However, HomeLine, while providing free services throughout most of the state, charges a fee for Minneapolis renters needing consultation, except for people affected by landlord foreclosure. Their website states:

“Ideally, we would have enough financial support to eventually serve Minneapolis with the same free services we currently offer throughout the state—however, this is not currently an option for us. We are now offering paid services in response to the closing of the city-sponsored Minneapolis Housing Services.”

In addition to the initial Reporter’s Notebook post, I also wrote a column about this story, which generated a lot of discussion about the idea of gentrification, housing policy, transportation policy, etc.

One interesting comment came from Janne Kimberly Flisrand, who wrote that one way to keep rents down is to increase supply by adding density into Minneapolis neighborhoods.

“In my opinion, the only way we’ll get the rental housing densities that we need to keep rents down (or at least tamed) is if renters start showing up at neighborhood meetings welcoming new apartment buildings at higher densities, luxury or affordable. If renters don’t show up in large numbers, the homeowners who have opposed density will continue to get their way, artificially limiting the supply of apartments (and condos) in the City and forcing up their own property values and rents.”

According to Minnesota Compass, based on the 2010 census, there were 742 vacant housing units, compared to 6,704 occupied ones in Whittier. About half the population made less than $35,000 a year, and the median rent for 2009 was $700. 46.1 percent of households were cost-burdened, which means that they were paying more than 30 percent of their income on rent.

Flisrand may have a point: as the rental market gets tighter, it behooves renters to get involved in their neighborhood organizations or start their own groups. However, being an active organizer can be difficult when you’re working and raising kids and, like some of the families in the building on Pillsbury, don’t speak English very well.

Erika is going to school for early childhood education, and is attending a program aimed toward building leadership skills for Latina women. She immigrated to the United States as a child, and has spent most of her life in Minnesota. Talking to her, I get a sense of how hard she has worked to better her own life and that of her family.

For the other families that have to move, perhaps it was more daunting to try to organize than to find a new place to live. Rivera said he didn’t have enough of an understanding of what his rights actually are without some legal support. “We don’t know the laws here,” he said.

• Gentrification: Am I the problem?

• Renting, from rats to riches