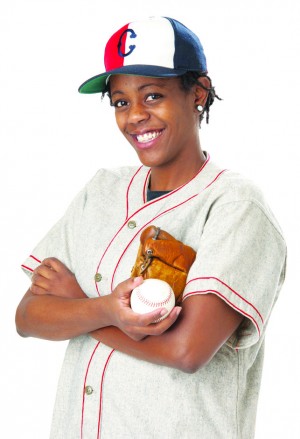 Marcenia Lyle Stone was born July 17, 1921 in St. Paul. She played on the local boys’ baseball teams despite her parents’ objections. Reportedly, they wanted their little girl to focus as much or even more on her studies as on athletics.

Nonetheless, Stone excelled in several sports, but baseball was her first love. At age 15, she played with the Twin City Colored Giants, a traveling men’s baseball club.

Stone later moved to San Francisco in the 1940s to care for a sick sibling and put aside baseball to work at a cafeteria and as a forklift operator. Then Marcenia Stone became Toni Stone and turned her age dial back 10 years so she could make herself more appealing while seeking a place on a men’s team during World War II.

She first played with a local San Francisco American Legion team, then with the San Francisco Sea Lions of the semi-pro West Coast Negro Baseball League, where she drove in two runs in her first at-bat.

However, Stone had to deal with a triple whammy: She was Black, a woman, and playing in a segregated sport. After playing on a couple of minor clubs, Stone was signed by the Indianapolis Clowns of the Negro Leagues in 1953.

At this time, the Negro Leagues had lost most of their prime talent, as this was six years after Jackie Robinson broke Major League Baseball’s color line. Stone was brought in after the team’s top player, Hank Aaron, had left for the majors.

She appeared in 50 games, hit .243, and played with future Hall of Famers Willie Mays and Ernie Banks. During the off-season, she was traded to the Kansas City Monarchs, but this would be her last year, and Stone then retired as a player.

Yet some believe that her groundbreaking story remains mostly hidden today. “I do a 15-minute-long program for children,” explains Erica Orton, a Minnesota History Center program assistant who portrays Stone. “It tries to cover her whole career and tries to focus on the different ways that she was attempting to achieve an unconventional dream and the barriers she faced along the way. I [also] try to connect the story of her being a professional baseball player back to her roots, growing up in the Rondo area.”

Orton admits that before role-playing Stone, “I knew almost nothing about her. I’d heard her name before, but that was about it.” She found a biography written on Stone, “and that was a really great starting point for me” along with some historical information on file at the History Center and a local historian who had once spoken with Stone.

“I think the most surprising thing was just how many barriers she faced in trying to be a professional baseball player, and she was able to keep going,” says Orton of Stone, who was later inducted into the Women’s Sports Hall of Fame in Long Island, New York in 1993.

“She faced discrimination being a woman and also trying to be something that was unconventional for women,” Orton continues. “She faced racial barriers [and] age barriers.”

The Dunning baseball stadium was renamed Toni Stone Field in 1996, the year Stone died at age 75. “The City [of St. Paul] did this,” local resident Frank White points out. He is working to get a plaque or sign placed outside the stadium that better tells Stone’s story. Despite its renaming, people still refer to Stone Field as Dunning, adds White.

Orton’s main objective is for people to learn after her performance that Stone never quit. “It just seemed that every step of the way along her career, people were telling her not to be a baseball player, but she just kept on going,” she noted.

Orton believes that the Toni Stone she has gotten to know and portray at the History Center is one the local public should learn to get to know more about. “I definitely do not think that her story has been told enough. I truly connected to her, having played her. Somehow her story has gone under the radar, and I wish more people knew about her.

“To this day, women are not playing professional baseball, [and] I think this points out how important her achievement was,” says Orton. “It’s unfortunate that she went through most of her life without being really, truly recognized for what she did.”

This is the third of five stories that will appear in the Minnesota Spokesman-Recorder during the month of February in recognition of Black History Month describing Frank White’s projects and the historical background behind them. Information from the African American Registry and Biography.com was used in this article. Read last week’s story, “I feel like I’m driving over my bedroom” — St. Paul’s Rondo history in spotlight at Minnesota History Center

Next week: What is Jimmy Lee so famous for to have a St. Paul recreation center named after him?