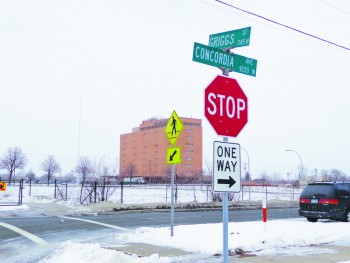 Minnesota History Center Program Assistant Dwight Scott often uses in his classes a former resident’s quote that every time she drives on Interstate 94, “I feel like I’m driving over my bedroom.”

“This was a story that [Interstate 94] was a neighborhood before all this was there,” notes Scott on the construction of the freeway that led to the devastation of the once-vibrant Rondo neighborhood that during the 1930s was the heart of St. Paul’s Black community.

Rondo had “a different kind of vibrant activity there…a sense of camaraderie among different races,” says Scott. It is featured in “Uncovering Rondo” as part of the History Center’s “Neighborhood Access Initiative” educational program for youngsters to learn about their neighborhoods while visiting the center.

Scott says today’s youngsters are often surprised when they learn that the freeway wasn’t always there. The area was home to such notables as Toni Stone, the first woman to play in the Negro Leagues, architect Clarence Wiggington and baseball legend Dave Winfield.

“It was a place where you would not think of [having] famous houses or mansions,” Scott says. “But one thing I try to stress [to students is] that what makes a place important isn’t all about buildings and politicians, but the vibrancy, being rich in family and community.”

Unfortunately, not unlike other heavily populated Black neighborhoods around the country, Rondo was targeted by the urban renewal movement of the 1950s and 1960s for major highway construction. “There was a desire to build highways because the federal government was going to give states millions of dollars to build highways,” explains Scott. City planners in this area wanted “a straight line as much as possible from the downtown business district of St. Paul to Minneapolis.

“There were other possible routes,” Scott continues, “but they would have to take out businesses as well as homes. I think that happened in other states as well, where the city considered [the targeted neighborhood] as a rundown area, and it was cheaper to go with that route.”

In St. Paul, Black-owned homes and businesses along a corridor between St. Anthony Avenue and Rondo Avenue — the heart of the city’s Black community — were soon cleared out for the incoming interstate highway, even though most of them weren’t directly in the path of the planned route. As a result, the predominately Black neighborhood where many moved to after relocating from the South decades earlier, forming a tight-knit community, was slowly erased as families were scattered to other areas.

I-94 “radically changed the landscape of the Rondo neighborhood,” says the Minnesota Historical Society literature on the area, which was reshaped by the freeway, beginning at Dale Street and going east. However, what has been largely forgotten is that the original Rondo Avenue ran parallel to St. Anthony.

This is why Frank White and others are working to have honorary signs, “Old Rondo Avenue 1865 to 1966,” installed at the present corners of Ravoux and St. Anthony, and Marion and St. Anthony.

Driving down the present Concordia Avenue “is not Rondo,” White quickly adds. As a result, “It is important to me that to have those Rondo signs so that people can see that. It’s a significant piece of history that people aren’t just aware of.

“People talk about the Rondo neighborhood and how it thrived, and people lived there, but east of Dale there were a lot of [Black] businesses there,” White points out. “That’s a real part of our history.”

Next week: Who is Toni Stone and why is a local baseball stadium named for her?