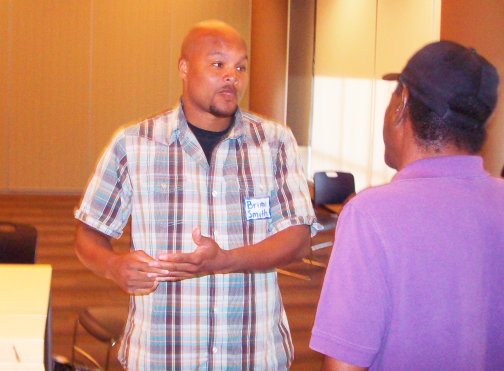 The new school year will begin in a couple of weeks, and a local group of parents are asking what it will take to provide excellent education for every child in every neighborhood.

Neighborhoods Organizing for Change (NOC) held an open discussion Saturday, August 13, at Rondo Library in St. Paul. According to NOC organizer Kerry Felder, it was the first in a series of meetings scheduled in the next couple of months.

“The purpose [of Saturday’s meeting] is to develop a conversation” on the importance of good schools for all, said Victoria Balko, who lives in North Minneapolis and is a mother of one. Many who attended the 90-minute morning session expressed their concerns about the present state of education.

Schools should help all children adjust to life, believes Zong Choua Thao, who lives on St. Paul’s East side.

Brian Smith is a father of two high schoolers and a pre-schooler. “I’ve been involved in my children’s education since the beginning,” he noted, adding that other parents who started out the same but grew frustrated with the attitudes of some educators and administrators toward Black parents who feel “devalued and ignored so much.”

A grandmother told of her experience with school officials in not adequately meeting her grandchild’s educational needs, which resulted in her asking for an emergency transfer to another school. She added that a “teacher bond” with children is necessary for classroom success.

Others complained of uneven handling of discipline, especially when it comes to Black students and other students of color. “Look at the suspension rate, and you can see the unfairness of the Black children versus the White children,” said parent Shatona Groves, who attributed this to a lack of cultural competency among teachers.

“These teachers aren’t teaching,” noted Tonia Collins, a substitute teacher. She strongly supports the idea that more Black teachers should be hired. “I’m hoping that this is going in the right direction, that they will start looking at teachers of color,” Collins pointed out. “If you look around the school and everyone is White, and no one looks like you, how can you relate.”

Collins also believes that a maximum of 25 students per classroom is best, and that each classroom has a teacher’s aide as well.

However, famed educator Mahmoud El-Kati told the group that too much talk is being spent discussing large class sizes and poor test scores as prime reasons why schools aren’t working for our children. “I don’t agree on what you’re talking about,” he pointed out. “Someone’s got to question the American ideology. The system is defining that White people are smarter than Black people. We got to change this fundamental basis because it produces false consciousness.”

Felder added that El-Kati’s comments were very timely. “I’m glad of what he said,” she admitted afterwards.

“Our goal and intent was to have an honest, engaging conversation,” noted Balko, who is chairperson of the NOC’s education committee.

NOC Executive Director Steve Fletcher said that “real tough questions” must be asked of school officials. “I thought this was a real good meeting,” he surmised. “People came with some real strong experiences… We heard some real passion and want to make positive changes in schools.”

Felder said that NOC contacted 400 persons either in person, by phone or by email over a two-month period earlier this summer and asked questions on education. “We had a 90 percent response rate,” she reported, adding that the survey results are still being tabulated with plans to release its findings at a September 24 meeting.

“I think that the people at NOC have good intentions about what they want for our children, which is a quality education for all of our children,” said Smith. “However, I [am] a little bit reluctant when we are still pushing more for others to treat us more fairly. I think that the primary consideration should be to find the resources to educate and take care of our own children in our own school environment.

“We should begin to educate our own children and get the results that we want as opposed to continuing to look to others to do that for us,” he concludes.