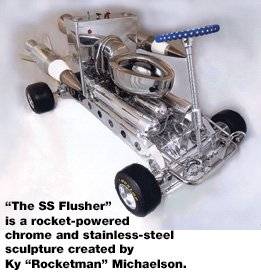 Elton John has nothing on Mr. Ky “Rocketman” Michaelson. In fact, “Rocketman” Michaelson may have actually lived a much more fascinating life than Sir Elton. He has worked on stunts in over 200 films, television programs and commercials, and the majority of stunt specials that have been seen on TV over the past 30 years. Literally hundreds of feature articles have been written about him and his adventures.

At 60-something years old, this Bloomington resident has the energy of someone less than half his age. His current exhibit clearly demonstrates his creative genius. A selection of Michaelson’s rocket-powered vehicles, referred to as “functional sculpture,” completely fills the Inez Greenberg Gallery at the Bloomington Art Center, leaving just enough room for his enthusiastic presence among the visitors.

Michaelson has spent his life designing and constructing a fantastical array of rocket-powered vehicles. In 1969 he built a rocket-powered snowmobile that made it into the “Guinness World Book of Records.” He went after every acceleration record in the world, and in 12 years set 72 state, national and international speed records. Probably one of his best-known endeavors is the launch of the first civilian rocket into space with the Civilian Space eXploration Team in 2004. He is a major partner of Orbital Expressways, Inc., a start-up commercial rocketry endeavor with the goal of low-cost space access for everyone. A determined and persistent man, Michaelson has achieved every goal he has set out to accomplish.

The exhibit at the Bloomington Art Center is shiny and awe inspiring. Knowing that Michaelson constructs his work while struggling with Dyslexia (teaching himself to read and write within the past couple of years) makes his accomplishments even more impressive. Michaelson spends months working on various projects at the same time. Like many artists, he gets an idea and sets to work, bypassing initial planning and design processes. He learns by talking to people, recalling information from his amazing photographic memory and through basic trial and error.

As arresting as the rocket-powered vehicles themselves is his flawless craftsmanship. Each piece is beautifully constructed with hand-hewn elements, clean joints and meticulous attention to detail. Michaelson refers to his vehicles as his “children” and maintains them painstakingly on his own in a large, private storage space. Don’t expect to find a price list at this exhibit; the pieces would range in the hundreds of thousands, if not millions of dollars. Furthermore, Michaelson would never part with any of his pieces.

The “SS Flusher” is a chrome stainless-steel toilet on four wheels with a fully adjustable rocket-motor propulsion system. The “Flusher” has 1,000 pounds of thrust and can go 200 miles an hour, activated when someone pushes the flush button. Just imagine this as an addition to the Art Car Parade! (By the way, the toilet itself isn’t actually functional.)

One of Michaelson’s more recent contraptions, The “High Speed Margarita Blender,” is comprised of a weedeater and miscellaneous pieces from around his shop. A small red motorcycle windshield protects bartenders from flying ice cubes and limes. His constructions use mostly 90 percent hydrogen peroxide, and sometimes nitrogen or oxygen. In this case, a lot of fuel goes a little ways—and it’s all highly explosive. The world’s only flying “Rocket Chair” is powered by Hydrogen Peroxide, burning seven gallons for about 45 seconds of flight. And we complain about fuel expenses!