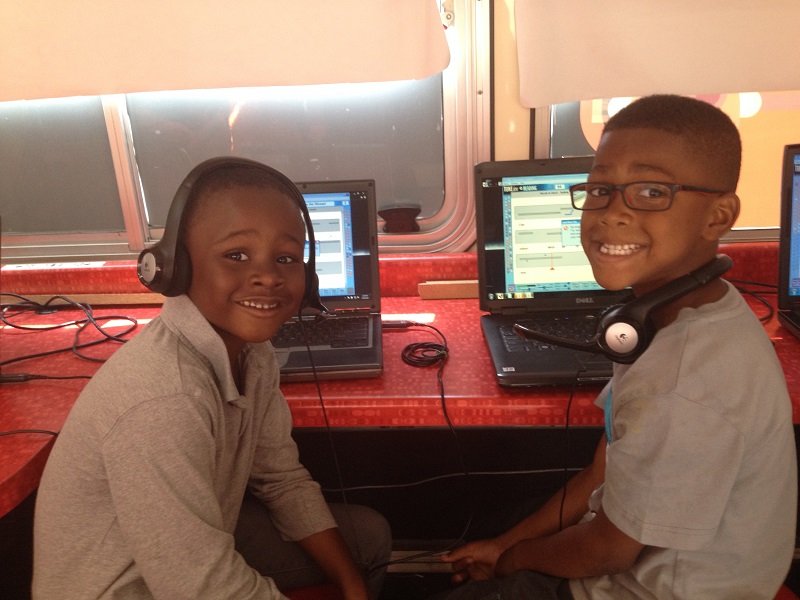 Amina Scott looked intently at the karaoke screen on her school bus as she softly sang “Major Pain,” one of her favorite songs about a puppy. At another part of the bus, other kids sang about fish sticks and cupcakes. But this wasn’t typical karaoke; these kids are working to improve their reading skills.

“It’s a good discipline to connect with music as a part of literacy,” said former city councilmember Don Samuels, who serves on the program’s board. “The kids are learning to read without realizing they are.”

The University of South Florida found that in a study from 2005-2008, students from three different school districts and four different grade levels consistently outperformed their peers when using the program over a three-year period. According to one report, struggling readers that used the program made gains of a year and a half over the course of a nine week study.

Samuels said he’s been impressed seeing the kids using the program at Hmong Academy and at the YMCA, especially when he sees the kids going up and down the street mouthing the songs they’ve learned. The program still needs to be assessed, but Samuels said he hopes it proves to be a successful tool to help kids who are behind catch up.

Executive director Bill Jones said he attempted to sell the software to school districts about 6 years ago, but with only mild success. Since then, he and board member Ann Kay formed the nonprofit on a bus to accommodate limited space in schools, he said, and are operating on a budget of $83,000 from loans and private donations.

Ceadric Ashford, a youth development staff member with the YMCA, said the program is challenging the kids to develop reading in a fun way and the quizzes and game-like rewards keep them focused. “Anything that keeps them engaged is great,” he said. “It’s getting them to sit down and focus — that’s something.”

Amina Scott said she really enjoys the program because she gets to learn new songs.

Thomas Scott, Amina’s father, said her daughter is a good reader in school, but he’s looking forward to the school year to see how much the Rock ‘n’ Read program pays off. In any case, she’s enjoying herself. “She’s always enjoyed music,” he said.

Dnia Fulks, who also uses the Rock n’ Reads Program at the YMCA, said she mostly loves the program because she loves to sing. Her mother, Esther Fulks, who herself works with youth around music and theater in North Minneapolis, said her daughter loves to read, but the program helps her with some elements such as pronunciations.

Executive Director of the North Community YMCA Matt Kjorstad, said the new program could help the YMCA address the summer learning gap for the large population of young people living in poverty, especially those of color.

Kjorstad said the program is working out well because it gets young people excited about learning. “It’s packaged in a different way,” he said. “Really the bus is a shell or a gimmick. The bus has nothing to do with it, but getting into it is really cool.”

The big leap will be how to transition the program into the schools, Kjorstad said, especially in the winter during cold weather. For the winter months, the program will need to be used in computer labs, he said, so Rock ‘n’ Reads will need to come up with a strategy to maintain the excitement and novelty of learning on a school bus in the computer lab.

The program has no confirmed dates for the fall and the board of directors is meeting this week to discuss logistics, Kay said, but members believe there’s a real future to this program.

“Who would have thought karaoke would be a learning tool?” Samuels said. “It’s a wonderful thing. We have to seize the moment with an innovation like this.”