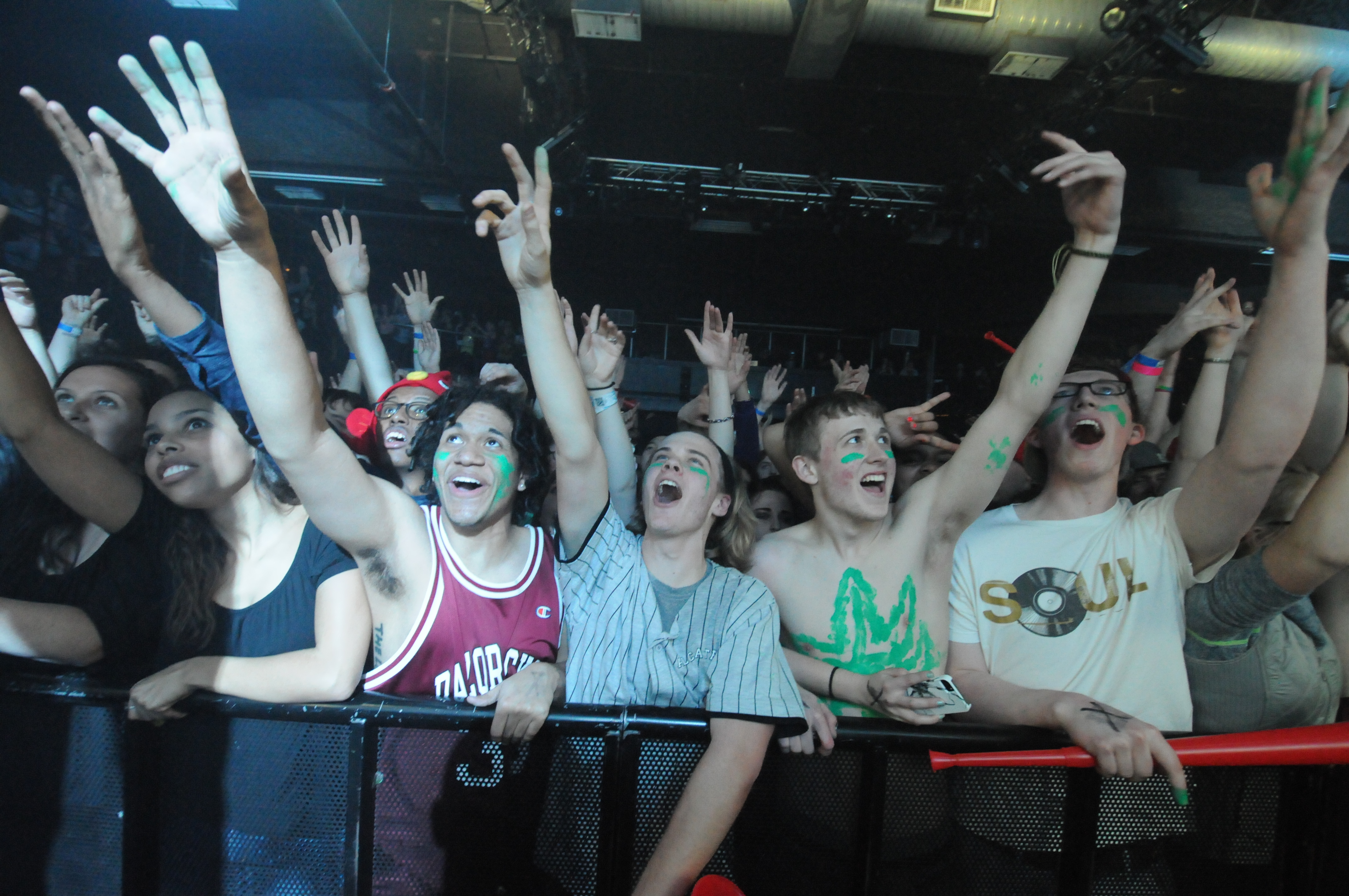 I ventured out of my comfort zone this week and wrote a concert review of Sigur Ros at Roy Wilkins Auditorium. I don’t do music reviews often, in part because I feel a little bit like a fraud when I write them.

There are so many other people who write them so well, and I don’t really understand the lingo of other music writers. Also, writing music reviews for Daily Planet isn’t as good of a “deal” as doing play reviews or dance reviews, because you actually don’t get paid, and you don’t get an extra ticket to invite a friend, so for me I feel like it’s not quite as fun. But I really like Sigur Ros and I figured if I didn’t sign up to review them I probably wouldn’t go, so it was an act of forcing myself to experience something that I would enjoy—which I did (you can see my review here).

And then the next day my friend invited me to go see the Divine Fits at the Varsity Theater, so I got two whole doses of seeing music this week, which makes me feel quite cool indeed. And what struck me about these two experiences was just how many people were there. It’s astounding really, how many people come out to all the different venues in the Twin Cities pretty much every night. A lot of college kids and people in their twenties especially were at that Sigur Ros concert, so they probably don’t have tons of money, but I would wager a bet that many of them go to see a concert once a week, or at least a few times per month.

I thought to myself: why don’t these people see plays? I’m sure some of them do sometimes, but I’m really interested in figuring out what it is about music that attracts larger audiences—especially young audiences. Is it just because it’s more “cool”? Or is there some more primal need for human beings to listen to music? Maybe it’s because rock concerts are more participatory: you’re not sitting dully in an uncomfortable chair but you’re dancing, you’re moving around, you’re talking to your friends, you’re cheering, you’re taking pictures or video and posting it on Facebook. You are part of the artmaking, kind of, at least more so than most other kinds of performances, where you basically just sit and watch.

Personally, I get annoyed at rock concerts because often you have to stand so long. There’s the whole “doors open” at a certain time, but often you have to wait around: sometimes for several hours before the band you want to see actually plays. But maybe that’s just because I’m lazy, or perhaps I’m just an old person trapped in a 34-year-old body. In that way, I can see why going to see a play is more appealing for older people. You get there, you sit there for an hour and a half (or two hours, with a break for the bathroom) and then you leave. There’s a lot less dilly-dallying about, and also a lot less chance for socializing.

One thing that factors into the popularity of music concerts has to do with the state of the music industry. Because people can get so much music for free very cheap these days, the only way musicians can make money is to go on tour. As a result, these very famous national acts are constantly coming into town. That’s not true for theater. Famous actors don’t go on tour. You can see them in the movies, or on T.V., or maybe on Broadway if they need to jumpstart their career, but we don’t get a lot of superstars coming here. Not so for music. I mean, why would you go see a play or a dance concert if you could go and see Madonna live? Or Bob Dylan, or drive to Chicago and see the Rolling Stones.

In this way, I almost have to disagree with Lightsey Darst’s article in mnartists this week about “The Disappearing Dance Curator.” I do see what she’s saying: that it sucks that our dance venues (most notably the Southern and the Cowles) don’t curate the groups coming in. Art doesn’t work very well with capitalism, I agree, and there should be other criteria besides the bottom line that dictates the shows that get presented at these and other venues. But at the same time, I don’t think a little capitalism would hurt. The problem is that there aren’t enough people that go and see dance, and there aren’t enough people that go to see plays. Maybe if we can start increasing audience sizes, we’ll have a little more leeway in regard to highlighting the best ones through curation, but we’re not there yet (that said, I’m delighted to hear Laurie Van Wieren is curating at the Ritz now. If anybody has a finger on the pulse, she does).

The question is: how do we get more people to see dance and theater? The mode of operation thus far is to dumb everything down, play to the least common denominator. That clearly is not working. It’s time for some innovation, some risk-taking, to really get things turned around.

Might I suggest that we take rock concerts as the gold standard of audience development? Sure, it’s a different animal, but I think there are things we can learn from the music industry. I humbly offer these suggestions (and I realize that some theaters are already doing some of these things):

1. Re-envision the seating. We don’t need to get rid of the chairs, but must they be so fixed? Couldn’t there be a system where people can freely get up and move around—to get a drink, to socialize, etc.?

2. Enact a social hour before the performance starts, and allow people to stay afterwards. Make it more of an experience, where people can talk to each other and have fun before and afterward. That way, their memory will not just be of the performance, but of talking to people too.

3. Allow people to use their phones. Stop making that damn announcement at the beginning of each show. People need to just get over the shock and horror when someone’s cell phone goes off. Let them tweet, let them Facebook. Welcome to the 21st century (or welcome back to the 19th).

4. There should be alcohol. Duh.

5. Give stuff away. Allow scripts to be read online. Post more video. If it’s a musical, give away free downloads. This is all essential advertising for the tickets.

6. Stop doing the classics. They are boring. People can do the classics in high school and college. We’re grown-ups now. We want something new.

7. Figure out ways to engage the audience. And no, obligatory standing ovations at the end do not count.