The Zip Rail project to connect the Twin Cities to Rochester with a fast train service has finally entered into a Tier I Environmental Impact Statement process, more than two decades after the concept of connecting Rochester was first dangled in front of the public. The EIS team held their first open houses this past week, showing off a number of routing alternatives and explaining some of the challenges that have to be resolved. Many different concepts for routings and endpoints have floated over the years, and the project has to weed out which options are the most feasible and likely to succeed. 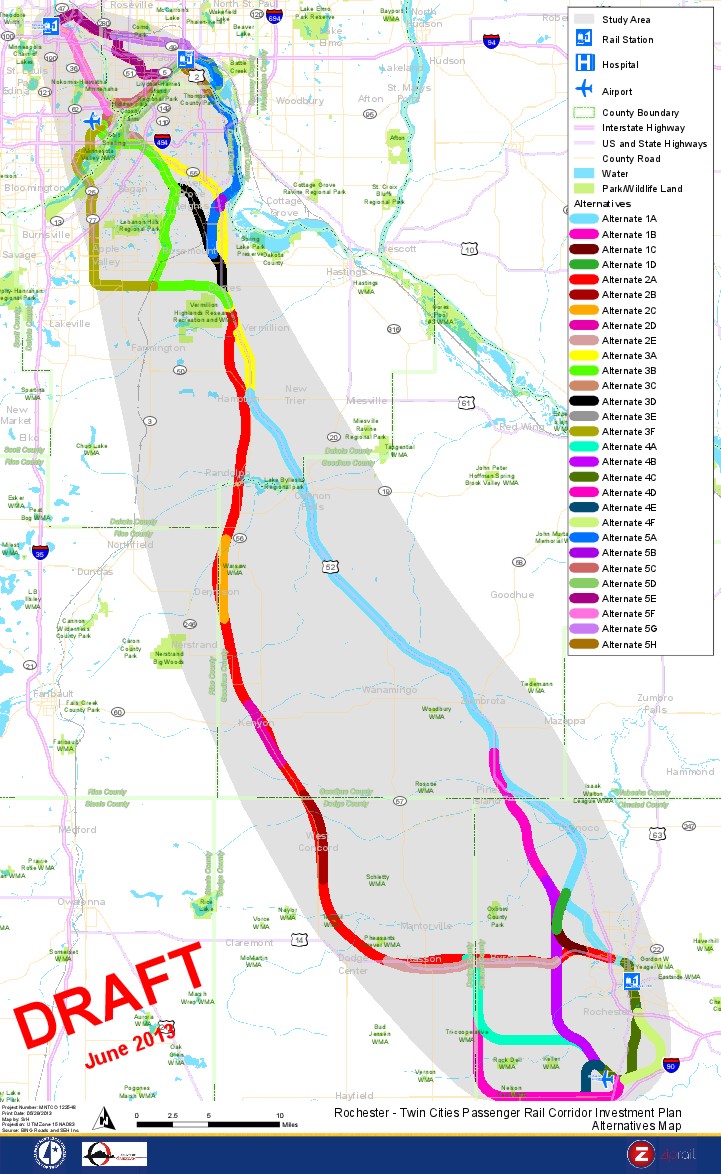 If my math is right, it has now been 22 years since my dad took me to a public meeting in Rochester about a Twin Cities to Chicago high-speed rail line. That was back when Minnesota, Wisconsin, and Illinois had collaborated on the Tri-State Study which envisioned linking the two metropolitan areas at speeds up to 185 miles per hour with TGV-like trains on steel rails, or even 300 mph with maglev trains—a technology that hadn’t seen any real-world deployments at the time and remains extremely rare today. While historical Twin Cities to Chicago trains were mostly known for running down the Mississippi River 45 miles to the east of Rochester, that study had found that rerouting the trains to go through Rochester would give access to a significantly larger population and could have time and cost advantages because of flat, open land that could allow far gentler (=faster) curves than what was generally possible along the river valley.

However, in the 1990s, the consensus among state and federal planners across the country shifted from the goal of building “true” high-speed rail that pushed the boundaries of what could be accomplished with train technology. With the government unwilling to hand out money billions at a time like what was required, the idea became that it was better to take a more incremental approach. Existing freight corridors would be reused, and trains would be pulled by diesel locomotives that would remove the need for the overhead catenary wires. There would also be less effort put into adding grade separations—bridges, cuts, viaducts, and tunnels—in order to save money. In the end, plans for super-speed trains across the country pushing 200 mph were generally watered down to plans for service at 110 mph.

This had an impact on the idea of going through Rochester, which had always added a significant distance to the route. The time savings of having more consistent high speeds were largely washed out because of the extra length. After many years of wrangling, MnDOT finally decided in November 2011 that the first enhanced-speed train service to Chicago would run along the existing Empire Builder route (used by the Milwaukee Road Hiawatha prior to the formation of Amtrak).

Another potential problem with building a super-speed line in the United States is simply the fact that our passenger rail network is really minimal and has largely stayed that way since Amtrak appeared in 1971. That wasn’t always the case, of course—rail lines weaved all across the country, really only thinning out in the least-populated states of the West. As this series of maps shows, the passenger rail network had rapidly become less than skeletal in the decade up to the formation of Amtrak. Other countries that have built true high-speed lines have been able to overlay them on top of pretty dense networks of existing passenger service, but that is practically nonexistent here.

It has slowly dawned on federal, state, and local governments that it’s also necessary to rebuild regional networks of conventional-speed trains. Today, statewide rail plans need to be in place in order to receive significant federal funding. Minnesota released a 20-year plan back in 2010, which included a link to Rochester regardless of whether it ended up being on the primary route to Chicago or ended up as a branch by itself. At this point, environmental review processes are now underway on three routes: Rochester, Duluth (Northern Lights Express, now advanced into Preliminary Engineering), and the river route to Chicago. The latter route’s future remains a bit murky due to Wisconsin’s political antipathy toward enhanced-speed service, though they are still participating in a parallel process that should result in a second daily round-trip between Saint Paul and Chicago.

Ahead of the EIS, the Zip Rail team has been working on a Service Development Plan to work out travel demand and how the line may meet those needs. No details have been released yet, but comments by presenters, including in this KARE11 report, indicate that it will do better than break-even with its farebox recovery ratio. If that pans out, it would open up a funding source from the Federal Railroad Administration that would cover 80% of the capital cost with federal dollars, only leaving Minnesota and the local governments on the hook for 20%—just like the Northern Lights Express route to Duluth.

A multitude of specific route alternatives have been proposed for the service, and it’s not even clear yet where the route will begin and end. On the northern end, there is desire to reach downtown Minneapolis (The Interchange), downtown Saint Paul (Union Depot), MSP International Airport, and some southeastern suburb. It’s not practical to reach all four of those, and even hitting more than two would prove challenging.

Some have advocated running directly between MSP airport and Rochester International (RST), but that would miss the center of action at both ends. Reaching MSP would require building new rail alignments within the urbanized area of Saint Paul or the Twin Cities’ southeastern suburbs, plus a crossing of the Minnesota River, Mississippi River, or both. Meanwhile, RST airport is a good eight miles from the main Mayo Clinic campus in downtown Rochester—it’s closer to the neighboring town of Stewartville.

On the main trunk of the line, there are two options that have been considered: either closely paralleling U.S. Highway 52 or running further west and making use of an abandoned rail corridor (built by the Chicago Great Western) when convenient or building anew to bypass sharp curves and small towns. It appears unlikely that any stops would be included between Rochester and a (potential) suburban Twin Cities stop. Along the U.S. 52 alignment option, the largest intermediate town is Cannon Falls. The CGW alignment gets frustratingly close to Northfield, running through the hamlets of Stanton and Randolph, each about halfway between that college town and Cannon Falls.

And lets not forget about speed, frequency of service, and related issues. MnDOT’s 2010 state rail plan suggested building along an alignment with curves capable of 150 mph, but beginning service with diesel-powered trains maxing out at about 110 mph (going significantly faster typically requires electrification as well as a fully grade-separated corridor). The Zip Rail team claims to be looking at speeds up to 220 mph, but again it might just turn out that they’ll build on an alignment capable of super-speedy service someday, but will initially implement the slower, un-electrified service. Also, with the short distance, it could easily become a waste to go super-fast, since the amount of time actually spent running at top speed wouldn’t be all that long. Would it kill you if the train took 50 minutes instead of 40, especially when the highway travel time is 90 minutes by comparison?

It’s not entirely clear how often trains would run either. Some studies have proposed up to 20 round-trips daily, and why not? If the bulk of the corridor is dedicated to passenger service, it makes sense to run as many trips as are practical. And if the end-to-end time for a train is less than an hour, it wouldn’t take much staff or equipment to run the service all day long. A good deal of thought would need to go into picking the right size of train, though: Too small, and the economies of scale just wouldn’t work out. Too big, and the capacity would swamp demand. (In the extreme, there’s no need for a double-height, double-length TGV Ouigo with 1,268 seats, for instance.)

Still, the number of trains would probably be constrained by the amount of pre-existing freight track used within the Twin Cities. At the meeting I went to on Tuesday, 8–10 round-trips were suggested, again on par with NLX and still far better than train service in most of the U.S.

Since this will be a largely “greenfield” alignment no matter what, the cost will be steep. Whatever the cost is, it should be contrasted with the amount of economic activity going on in Rochester, estimated to be in the billions over the next several years merely based on the Mayo Clinic’s activities. A series of past studies have estimated a significant positive impact from such a train, so it’s hard to expect a different outcome this time. The route also has the potential benefit of becoming the first leg in a truly high-speed link between the Twin Cities and Chicago, the two biggest economic centers of the Midwest. The road ahead is long, though—The EIS is expected to take 24 months, and it may still be another decade or more before the Zip Rail project lives up to its name.