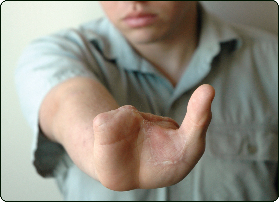 Lieutenant Cardona lost part of his hand while deactivating landmines in Colombia.

The first time I heard about landmines I was just a little kid in the early ’70s. The Vietnam war was at its peak and images of civilians mutilated by landmines were being exposed to the world for the first time ever. A few years later images of Latin American territories devastated by landmines came to my attention and the number of people mutilated by these cowardly weapons made me wonder what does it take to stop the damage they cause.

Years have gone by since then and most Latin American conflicts are over, but in Colombia, the death toll from landmines continues to grow. The number of victims is increasing rapidly and efforts to stop them seem to be fruitless. In the middle of the storm, help has arrived for the victims of landmines and United For Colombia, a foundation based in Washington DC, has found a way to launch an international effort to bring relief to these people. The Rochester Program, based in Minnesota, has already accomplished its mission with dozens of people, both civilians and soldiers, mutilated by landmines.

Few people around the world have the chance to meet, face to face, with victims of landmines. Prohibited by international conventions, these are one of the most despicable weapons ever created. They are set up in farming lands or abandoned lands. Buried in streets or tracks in the jungle. Activated by tiny mechanisms, they explode when someone steps on them and mutilate or kill the people surrounding the victim.

Colombia, devastated by years of civil war, has the second most victims of landmines in the world. Every eight hours, a person falls victim to landmines; suffers mutilation (lose of arms, legs, hands) and suffers physical, emotional and economical distress. In the worst case scenario these people die, but the vast majority survive.

Real life in Colombia
Colombia is immersed in a deep conflict that has continued for more than 30 years. Colombian guerrillas, headed by FARC and ELN, control big chunks of the country and use fear as a weapon to sustain its dominion over thousands of people. Plan Colombia, a strategy created by Alvaro Uribe’s administration, has already proved that the guerrillas are not invincible. Through this plan, Colombian government has been able to recover a big portion of land that once was under FARC or ELN control. Government accuses the guerrilla movements of being drug dealers-terrorists, with close bonds to drug producers and distributors in the country. In the meantime, both the FARC and ELN accuse the government of responding only to foreign interests (U.S. interests) and those of the rich and powerful in the country. The common people, those who live beyond the war, are the ones trapped in this fight and the ones paying with their blood for a conflict with no understanding.

The truth is that the lack of understanding is affecting the lives of hundreds of thousands of people. While they try to reach an agreement, 15 percent of Colombia’s territory is covered with more than 120,000 landmines and the lives of millions of people are in danger. Some 89 percent of people wounded by landmines are young adults, in the peak of their productive age. Most of them are fathers and they lose, in a quick second, their ability to feed their families and continue working. Eleven percent of the victims of landmines are children under 12 years of age. 4 percent of them are women and, 37 percent are civilians trapped in the middle of the conflict.

According to information received from doctors who treated wounded people and Colombian Army, the landmines, set up by the FARC and ELN, have been infected with cyanide and feces. Cyanide is a powerful poison that enters the blood stream and produces serious damage in a matter of seconds. Feces is added to make sure that the wounds get infected and bacteria accelerate the infection process.

Major Lopez Lautaro
We met him at our offices, during an informal interview in which he told us about his case. He is now the leader of the group of soldiers and civilians receiving medical treatment in Rochester, Minnesota, at the Mayo clinic. He was flying his helicopter during a routine search when his team suddenly found a guerrilla camp. They found themselves, in a matter of seconds, under fire from heavy guns. The ammunition used by the guerrilla was infected with feces and cyanide.

He managed to get his team out of the place but there were several wounded soldiers. He was the only survivor of a team of eight. His wounds were badly infected and the effects of cyanide got him into a very deep coma that lasted five-and-a-half months. As a result of the wounds he received, he lost a third of the bone tissue in his right femur. He was moved to the Mayo Clinic this year and he is going through medical treatment and recovering from both emotional and physical wounds. He works now as a liaison between UFC – Mayo Clinic Program, wounded soldiers and civilians and Colombian Army.

Lieutenant Cardona
It was the morning of March 30, 2005. Lieutenant Cardona was leading a mine-sweeping operation in Southwest Colombia. A few days before that a captain, a sergeant and seven soldiers fell into a landmine trap. On the first day of operations, the team found and deactivated 60 landmines. On the second day, they ran into an ammunition factory abandoned by the FARC just a few hours before. He decided to go in, alone, and deactivated the mines (this is the common procedure in this cases to reduce the amount of casualties) and found a good amount of landmines in the hallway.

He walked through the factory, deactivating mines until he ran into a room with several electrical plants. As he was walking by, a series of mines were activated using a remote control device, seriously wounding him. He found his way out, back to his control point and he was immediately taken to the Villavicencio Army Hospital. He suffered serious wounds in the face, right arm, ears and right leg. He lost four fingers on his right hand and three fingers on his right foot. He remembers the events very clearly and he remembers trying to stay awake despite the enormous blood lost. “I was afraid of falling sleep. You are afraid because if you do, you don’t know if you are going to wake up again or not.” He is receiving treatment at the Mayo Clinic, where he is recovering rapidly.

Private Garcia
He was a member of the 5th Brigade and part of an operation taking place in one of the most active regions in Colombia. They were hunting guerrillas spotted a few days before when they ran into a small village. As they were walking to the village, they walked through a series of palms filled with mines. He accidentally activated one of the mines that jumped about three feet from the ground and exploded in his face. He was seriously wounded in the face, skull and right leg. He received treatment in Arauca, Colombia, and then moved to Rochester, Minnesota, where he is recovering from his wounds.

The UFC-Mayo Clinic Program
Founded in 2003 by United for Colombia and leaded by Dr. Carlos Mantilla, this program has helped dozens of wounded soldiers and civilians recover from their wounds. The program brings medical support, surgery, prosthetics, and support to people wounded by landmines. They receive therapy and support to get back on their feet again. The program has no cost for the wounded and it includes the flight and all the means they need to recover.

“We really love Rochester, is such a beautiful city, designed with disabled people in mind. We can move from one place to another with no problem at all and that’s different from what you see in other cities,” said Garcia.

ACME the Association of Colombians in Minnesota has joined its efforts to the UFC-Mayo Clinic Program and its members are becoming support group for the people in recovery.

The damage of landmines
The interview turned very rapidly into a friendly conversation and we became good friends with Major Lopez Lautaro and his people. During the conversation we had the chance to learn more about the damages and consequences of landmines but, as we spoke, we saw a little tear in Major Lopez Lautaro’s eyes as he was referring to the wounds in children.

“Just imagine a young child losing an arm or a leg” he said “His whole life turns upside down in a matter of seconds. That child will have to go through tens of surgeries during his lifetime, just to adapt his prosthetics and other elements he may need to walk. Most of them don’t have the money or the resources to pay for the surgeries. How are they going to survive out there? Even attending school is a challenge for some of them…”

But the wounds left by the landmines go beyond the war. They are usually accompanied by economical distress; loss of productivity, and tons of emotional and physical challenges for the families. Some of these families end up separated and dysfunctional.

Emotional damage associated with landmines and the wounds inflicted on people’s morale are even harder to heal. For people living beyond the war is hard to understand the reasons why either side of this conflict use these cowardly weapons. Just imagine yourself trying to explain to a small child the reasons why he has lost a leg, after stepping on a landmine. That explanation is something that goes way beyond any war.