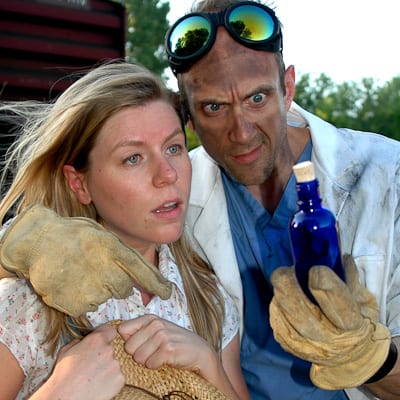 ROBO-homa! promised singing and dancing robots, and on that front it did not disappoint. After the overwrought, underwritten music in Wicked, it was a sublime pleasure (I’m not overstating this; I wish I was) to be presented with singable, danceable songs, written by Mark Sweeney and Phil Gonzales and performed by a game and well-drilled cast. (My friend Amelia English designed the show’s movement, which means, among other things, that she taught the robots how to act like robots without acting like robots.) Along with You Are Not Paris, ROBO-homa! was one of the two best-looking shows I saw at this year’s Fringe. Megan Kelly Hubbell’s choreography elegantly filled the large Rarig Proscenium stage, the costumes looked great, and the dynamic lighting was much more integral to the production than is typical in a Fringe show.

The show didn’t just have dancing robots, though—it had dancing robots who were involved in a complex plot (also written by Sweeney and Gonzales), and that’s where things got a little hairy. There’s a central plot involving Jud (Michael Lee), one of the last surviving humans after a robot rampage, and then there are at least three other subplots involving a robot romance, a pleasurebot reprogrammed (ineffectively) for frontier life, and a human peddler (Charles Hubbell) whose pack is heavily laden with exposition. How did the apocalypse come about? Why did some humans survive? If these are killer robots, why are they now performing Oklahoma and specifically promising not to harm humans—and under what conditions might they revert to killing again? Throw in not one but two fake deaths, and you’ve got a lot of ‘splaining that has to happen in under an hour, while making room for several songs and a dream ballet.

Though ROBO-homa! had to rush to get through all the tasks it set itself, resulting in a plot pileup at its conclusion, the production also accomplished a lot. From the opening scene, as Lee crawled across a wind-whipped landscape, an exhausted survivor who becomes terrified by an eerie glow and distant singing emanating from offstage, ROBO-homa! created an absorbing and unique onstage world. Happy robots are all alike; every unhappy robot is unhappy in its own way.