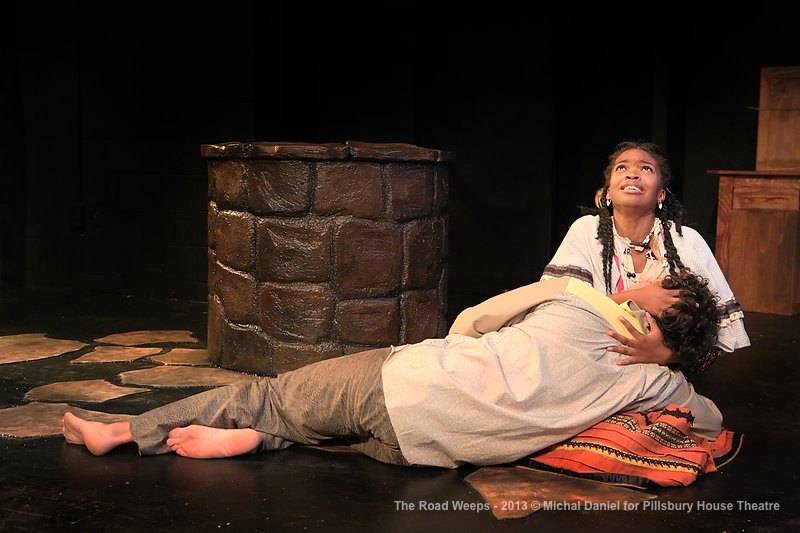 Murder, star-crossed lovers, a witch, unrequited love, near-incest, war, secret gay lovers, ghosts: the road weeps, the well runs dry, now playing at Pillsbury House Theatre, is packed with the makings of a Shakespearean tragedy, and indeed the heightened language, mystical elements, spirituality, and over-the-top plot twists give the production an epic feeling. It’s great stuff, and though it’s nearly three hours long, it never feels boring with all that’s happening. Plus, it’s a look at a period of history that most likely you never learned about in history class.

The play, written by Marcus Gardley and directed by Marion McClinton, mostly takes place during the first half of the 19th century, when a group of both American Indian and freed black slaves journeyed together from Florida, where they’d been kicked out, to “Indian Country,” which is basically now Oklahoma. The history of the Seminoles is pretty complex. The word “Seminole” apparently was coined by the Spanish, and originally included Myskoke (or Creek, as they are referred to in the play) and other tribes. In some instances, the Seminoles had slaves, but somehow, by the time the events of this play occur, the African American main character, Number Two (played by Ansa Akyea) and the Trowbridge (Jake Waid) no longer have a master- slave relationship although do continue their rivalry that sometimes looks like hatred and sometimes looks like lust (and sometimes both at the same time).

Black versus Native, women versus men, Christianity versus Native spirituality, heterosexuality versus homosexuality…the play has all sorts of conflicts, and never really resolves them, but rather lets the various tensions fuel and drive the play.

Of course, when all this drama gets to be too much, luckily there’s some comic relief provided by M. Gene (played magnificently by Regina Marie Williams) and her husband Fat Rev. (Harry Waters. Jr.). M. Gene is this slightly crazy Christian lady who bosses everyone around until she is spurned near the end of the play (a plot twist that didn’t totally make sense to me—but then, there were many things about the plot that didn’t make sense to me).

I did wonder about certain “Native” things in the production—the rain dance, the Native prayers, the war paint, the Native costumes—and I’m curious to learn how people from our local Native communities react to this play. I did notice the production also brought on local Native artist Jonathan Thunder to create a lobby video installation (unfortunately it wasn’t on when I looked at the video screen during intermission).

I really enjoyed James Craven’s performance as Horse Power (the town elder and medicine man), just because he’s got such an amazing voice and presence. Akyea, Williams, and Waters were also all wonderful, as they always are. Traci Allen, as Sweet Tea, the ingénue character, had an innocence as well as strength, and I was intrigued by Keli Garrett’s understated and down-to-earth performance as Half George (the witch character). I was less excited about Jake Waid’s performance as Trowbridge, which I found a bit pedestrian, although he does have surprising moments of genuine sweetness.

Dean Holzman’s set is simple and captivating, with a beautiful blue-lit lattice element across the back wall and sparse trees around the stage that gave the place a Waiting for Godot quality.

See photos, by Henry Hendricks and Kelsye Gould, of an event previewing the road weeps, the well runs dry.