We’re mostly done with the holiday season, and I’m sure many readers had interesting conversations regarding transportation over dinners over the past month. It’s even possible these conversations become “bang-head-on-wall” worthy due to hyperbole or misinformation (note to my family: not talking about you here!), similar to many online article comment sections – looking at you, Star Tribune. Many people commonly misunderstand how our roads are built, used, and funded, which can lead to unproductive conversations.

I realized that information is key to helping shape these debates, but good information is hard to find (and as we all know, knowledge is power). For the first post, I’d like to lay the groundwork: how is our road system classified/built/maintained, what do we have, and who uses it. Throughout the series, I encourage comments to clarify my data, sources, and calculations, so don’t hesitate to challenge me!

I know; this is the boring stuff. Who cares about road nomenclature, what levels of government are responsible for maintaining different roads, and all that jazz? I agree (mostly), but a little background will make the data later in the post a bit easier to understand. Plus… knowledge. For a much more thorough reference on road functional and jurisdictional classification system, I recommend brushing up on Reuben Collins’ piece (along with a good discussion on the challenges of the existing system). For an even more in-depth look on how they’re defined, this Hennepin County document does a good job as well.

Basically, federal, state, and county DOTs break down roads into a hierarchy that defines their function in moving traffic. They differ mainly in level of “mobility” (read: speed) and “access” (to private property and other roads/streets). The 4 main functional classifications are Principal Arterials, Minor Arterials, Collector Streets, and Local Streets. 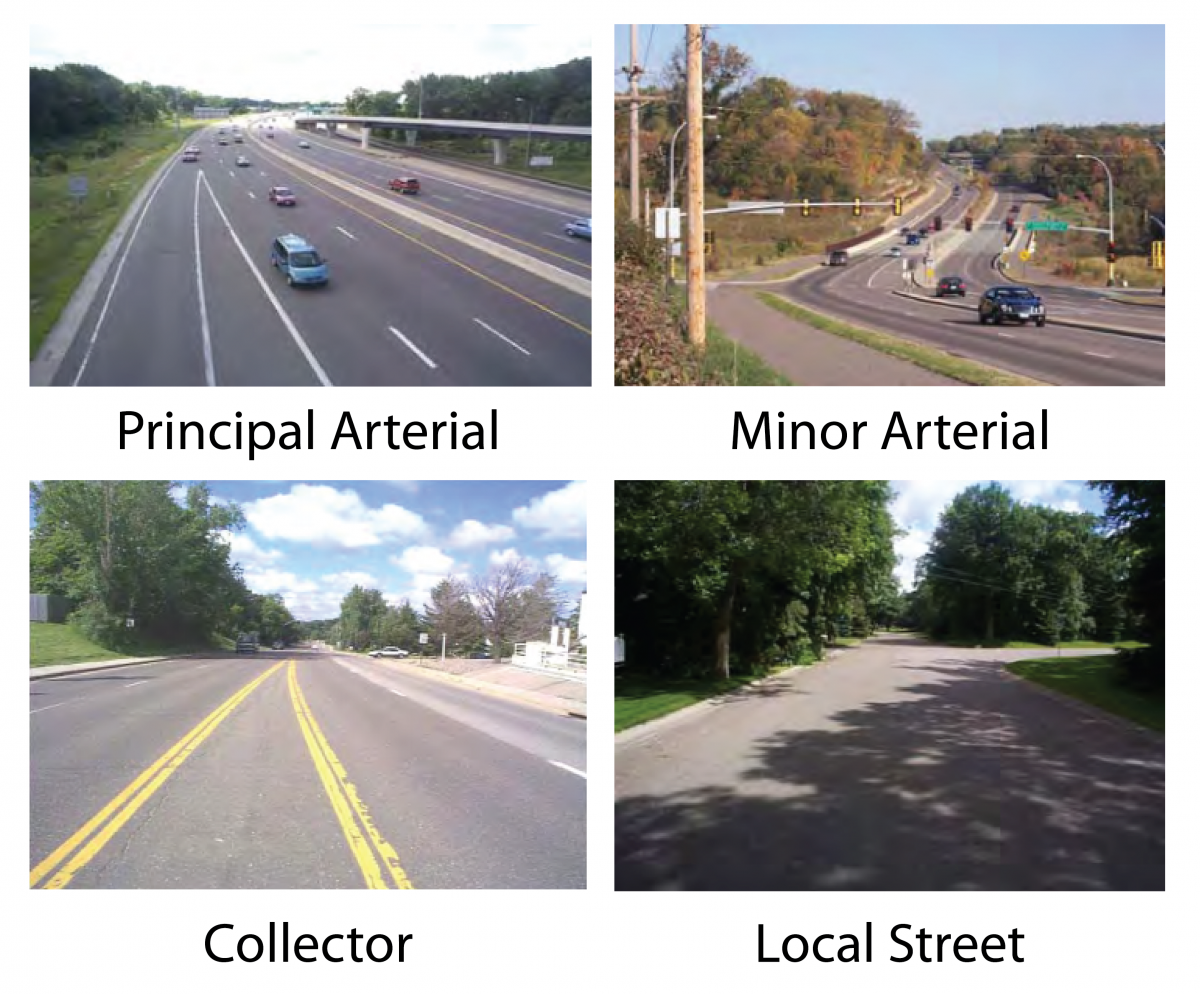 “C’mon kids, hop in the car and hit the Minor Arterial!” 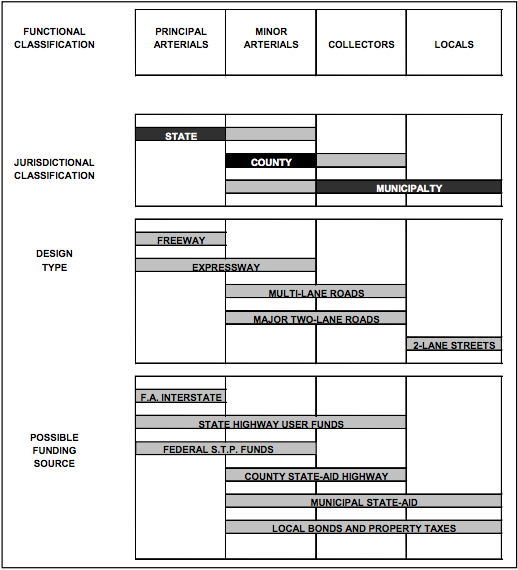 Right: Not confusing in the slightest.

Minor arterials were further divided into subclasses of Relievers, Expanders, Augmenters, and Connectors, but their functions are a bit too detailed for this post.

How Much Road Infrastructure Does MN Have?

It’s important to understand how many miles of road we have in our fair state. Furthermore, the breakdown by functional class gives us an idea of how much burden is put on different levels of government. Road miles can be measured as “centerline miles” (1 mile of interstate is 1 centerline mile) or “lane miles” (1 mile of interstate may have 4-10 lane miles depending on location). Including local and township streets, Minnesota has over 138,000 centerline miles and 284,000 lane miles. Only a small fraction of this is located within the Twin Cities urban area; just over 28,000 lane miles.

Municipal streets make up the majority of Twin Cities pavement

I find lane miles more useful as a data point since they more closely represent the amount of pavement in the ground for different road types, and thus associated costs. It’s interesting to note that roughly 60% of both statewide and metro area roads are largely owned and operated by municipalities, receiving little to no state aid (a point we’ll come back to in the next post).

Who Uses Roads, and Which Ones?

When ideas are tossed around for bike lanes, bike paths, dedicated transit lanes, or a reduction in thru-lanes to improve mobility, choice, safety, and/or access, a common retort is that every inch of existing pavement is needed for current drivers and the ever-important freight companies who move goods (both regionally and locally). Highway expansions use the same logic as well. Vehicle Miles Traveled (VMT) are reasonably easy to track and data is also very accessible. Of course, we can find average daily counts for many individual roads and locations when talking changes to specific corridors, but for now we just want the bigger picture.

Using FHWA information, we can see that about half of all urban VMT (this includes travel within outstate MN towns, not just the Twin Cities) happens on roads and streets with at least some local/municipal ownership. However, it’s equally telling that roughly half of our collective travel occurs on interstates or other highways and principal arterials. If you drive on a regular basis, you’ll intuitively know this to be true – how many places do you visit without hopping on a major highway or interstate?

Finally, it’s good to understand who uses our road network. I couldn’t find data at the state level, so national data will have to suffice. We’ll just assume travel share is roughly equivalent to those in Minnesota.

The last month has put pie on my brain, obviously.

This is only interstates and other principal arterials, but it’s painfully obvious that the large majority of road users are personal vehicles. Yes, a small share of light-duty vehicles represents cars/vans/pick-ups doing delivery and other business travel (think locksmiths, plumbers, couriers, etc), but are still likely a small share in total. In urban areas, freight traffic only accounts for just 7% of all vehicle miles, likely lower in peak hour travel (AM/PM rush hours).

Whew. There’s a lot of data to sift through (and there’s much more where that came from), but here’s a couple key takeaways:

My next post will delve into the basics of how MN funds roads and streets to understand how much users pay as a share of total spending.

This post is the first in a three part series on MN road infrastructure, use, and funding. Check back over the next week for the follow-up pieces.