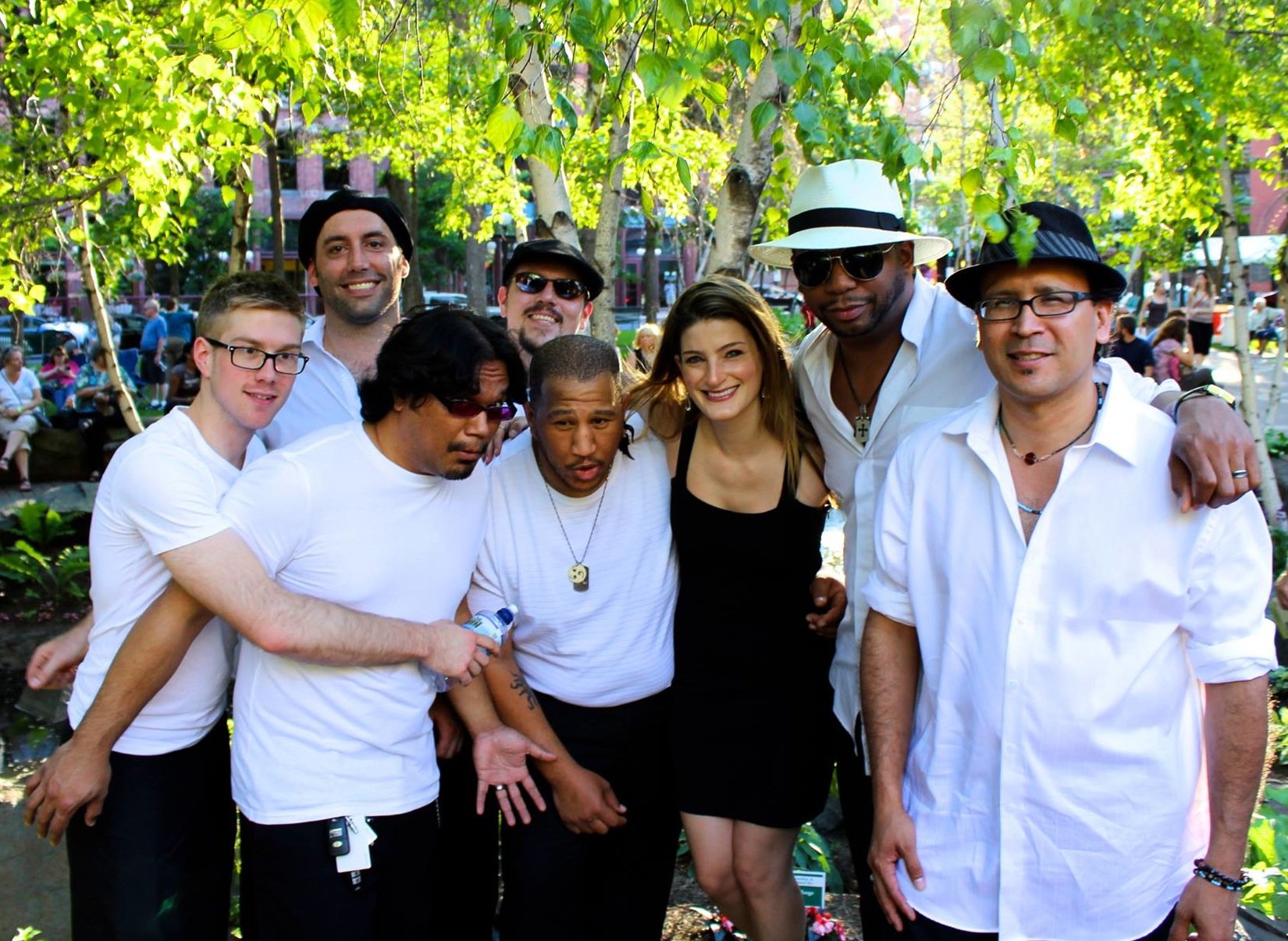 Photo courtesy RJ and the Soul

Talking shop with the songwriting team for popular R&B outfit RJ & The Soul is a refreshing departure. Sitting down at Pow Wow Grounds coffee shop in South Minneapolis, the interview is an informal gab session as interesting for the different personalities as it is for the information about how the creative minds in the band create material and get from the drawing board to the stage and recording studio.

On one end, you’ve got guitarist Oscar Del Sebastien, a reflective sort who takes his time with measured responsive before saying what’s on his mind. On the other, there’s bassist Taylor Cisco, a bit of a cutup who makes the first remark that pops into his head and then worries later whether its actually something he wants on the public record. In between, guitarist Phil Miller and vocalist Rachael Johnson are casual without being off-the-cuff, recalling this or that step in the process, filling background. RJ & The Soul’s album Viva Soul is a fine recording, fairly eclectic in the writing, excellent in the performance.  It’s evidence that the time and energy they take in putting their material together is well worth it.

Oscar Del Sebastien: Typically, [someone will] write at home, bring it in to practice. We’ll hash it out. If I write a song, I’ll record it on a MacBook, then email it to the band. We’ll fine-tune it.

Taylor Cisco: Rachael doesn’t play an instrument. So, she’ll tell us the vibe she wants. Phil [often] will come up with the chord that goes under the melody.

Phil Miller: A lot of times Rachael will come up with a skeleton. Lyrics and a melody. For instance with “Step Two,” the melody actually changed as we got the progression down.

Taylor Cisco: Phil came back with this wonderful arrangement. Once [he] got a-hold of it, it became a beautiful job.

Phil Miller: The what?

You’re the one with the music theory background?

Phil Miller: Yeah. I’m not studying it, but, I know theory.

Taylor Cisco: We try to be musically competent. No one will accuse us of being too technical. We don’t use charts, for example. We have a horn player [Topher “Drop-Top” Dunlap] and it’s all by ear. Or even when we brought in Pamela [Machala] for keys, we just call out the changes. It’s not like “It’s gonna be 4/4 time.”

“Velvet Skies” sounds like it came out of the Santana songbook.

Oscar Del Sebastien: That’s not what is sounded like at first.

Rachael Johnson: It changed quite a bit. It was a Taylor song that he brought to the group, and we started it out kind of like a Be-Bop. Then, it slowly progressed to more of an R&B type of groove. I don’t know how that happened.

Oscar Del Sebastien: Somehow, at practice, something came up, and we just gave more swingy kind of slowness to it. A little more sexy. The bass sounded like Outkast and Taylor said, “All right, let’s go with that.” That was the solidifying thing. Songs, just like anything, they grow and kind of take their own shape.

Taylor Cisco: For the most part, that’s kind of old school. In the live show, we do more with it.

Taylor Cisco: There’s improvisation.  Different rhythms come up. “City By The Sea” is another example.

Oscar Del Sebastien: [That] initially started off as Pachelbal’s Canon in D-major. It was a song I wrote [patterned after] a traditional song they play at weddings. What I like about it, it’s a very catchy melody. Taylor has this thing about using other musical arrangements. I don’t. So we came up with a different arrangement for it. Then, when Phil came up with all his equipment, he made it sound more like U2. Recently, came with version that is the same arrangement but with a reggae feel.

And you get through all this without stepping on toes.

Taylor Cisco: We all feel comfortable with each other. No one is, like, “This is gonna offend Oscar.” Even if it does, so what?

Oscar Del Sebastien: Taylor has been doing this for like what, four years? We were a different band before. Twice. Three times,  probably. One of the biggest problems we had was trying to keep a band together, ’cause people have their ideas of what they wanna do. They’re shortsighted and, like, “Things are going the way I want them to go.” And they leave. Make a quick decision and wash their hands. Whoever does that does everybody a favor. We look for commitment [to] the band. We want someone who’s gonna work it through even if it’s a rough patch. Even if a song isn’t working, trying to get a song down. Sometimes it’s not a simple process. One day you’re feeling, another day you’re not. You have to stick with it. That’s what has happened with most of our songs. We work together.

Phil Miller: I was in another band where the lead singer, he wrote everything and was very hard for anyone else to have any input. We’d say something. He’d nod and go, “That’s a good idea.” But, it would never come out that way onstage. One thing I appreciate in this group, when we bring something up we actually act on it. My history with the group doesn’t go as far back as Taylor’s, Oscar’s, and Rachael’s. So, for me, it was [a matter of] fitting with the group as a whole. Overall, I can’t say I’ve ever felt uncomfortable. I view the songwriting process less as an act of creation and more of something of a discovery. Even in its infancy, it seems a song has something it wants to be. Our job in writing and arranging is to bring that to fruition. Even though we might not talk about it in those terms explicitly, it seems that we all have that implicit understanding. So, I think we all approach the process with the idea of respecting the song and not trying to force it to be something it’s not.

Rachael Johnson: Taylor and Oscar were in the band when I first joined. Phil joined us later on in the band’s history. Taylor and Oscar had known each other for quite some time and had already established a relationship. Upon first joining, it was difficult for me to feel comfortable sharing my material, my thoughts because I was a newbie and hadn’t gotten a handle on how they work creatively. Taylor and Oscar were very encouraging of me which made it easier to share with the band my own material. It is always challenging to find your place in a new band.  But these guys were all open to hearing my opinion, which helps.

Taylor Cisco: Rachael will tell us when one of her songs is not going the way she thinks it should go.

Rachael Johnson: Yeah, most of the time, I just write it, I like it and I present it. When I come up with a song, I  have already sung it, recorded it and emailed to these guys so they can get comfortable with it. I have an idea already in my head about how it should sound, what the vibe should be. So, I try to communicate that with [them]. They have the music background to do an arrangement. I feel I’m at a loss to do that. It’s lucky I have them to hear what I’m saying and take it in the direction that I see it going. It’s a good collaboration.

There’s respect, trust.  As a woman, you’re not just some hottie with a sweet voice.  How important is that?

Rachael Johnson: It’s very important—especially because I don’t come from a music background. It could be easy for them to be, like, “Oh, she doesn’t know what she’s talking about. Let’s work over that song and we’ll do our own thing.” That’s not the case. It’s awesome.

Oscar said something about you coming on board?  So, you weren’t originally with the band.

Taylor Cisco: I saw her in a band, the Sessionists, at the Fine Line. At the time, we were called Mpls South. We were playing that night, too. I went up to Rachael and told her, I’m a big fan of your voice. We already had a singer. So, nothing happened. But a year, two years later, her band had broken up and we didn’t have that singer anymore. So, when she answered a [classified] ad and came down, everybody knew right away that we wanted her to join.

So, it fell together.  Like it was simply supposed to happen.

Taylor Cisco: Yeah, it did.

The playing, the singing, the writing, the whole thing.

Read Viva Soul by RJ and the Soul: Soulful and Sexy (Dwight Hobbes)