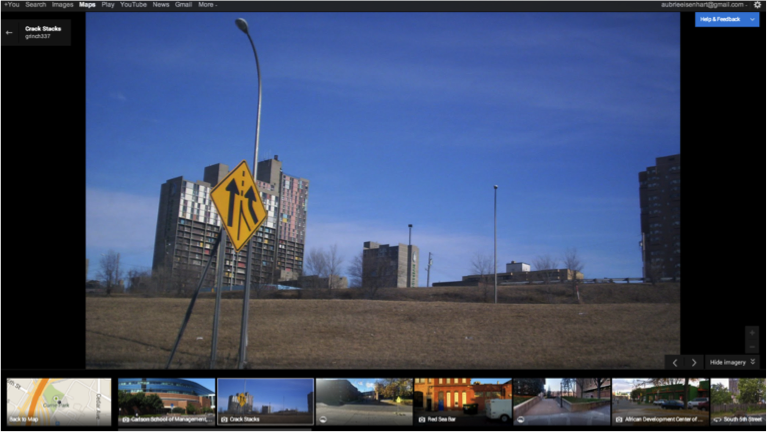 This year, 2013, marks the 40th anniversary of the opening of America’s first, and essentially its only[1], New-Town-In-Town. It also happens to be in our own backyard, Riverside Plaza. More often known negatively as the Crack Stacks, Ghetto in the Sky or Little Mogadishu its conception as a response and remedy to the issues stemming from urban renewal have largely been forgotten.

Boiled down to its essence the New-Town-In-Town (NTIT) program intended to create a replacement model for the neighborhoods that had been destroyed by urban renewal. Urban renewal had ravaged America’s cities leaving a deficit of affordable housing, a diminished tax base due to suburban flight and leftover plots of land where intended development never materialized. Large scale, comprehensive development was needed to deal with these issues according to the Department of Housing and Urban Development (HUD). With a total system approach (including housing, social services, employment, etc.) plus a long-term financial commitment, HUD believed these developments could become a reality. Minneapolis would be the first and last city where efforts to make a NTIT would be exhibited.

Several factors made the selected space within the Cedar-Riverside neighborhood conducive to developing a NTIT and remedying the issues brought on by urban renewal. While it was not the vacant parcel HUD had envisioned NTIT developments being erected on, it was full of deteriorated housing stock with a majority of it owned by one developer, Cedar-Riverside Associates (CRA). It also helped that CRA envisioned large-scale redevelopment in the area and had powerful allies, such as Henry McKnight, a Minnesota state legislator, who connected it to financial resources.

One of the biggest connections McKnight made was having CRA’s master plan for Cedar-Riverside accepted for NTIT designation. Gloria Segal’s (co-developer on the NTIT) vision for the space also presented a solution for improving the city’s tax base, an issue HUD hoped to solve with its development. She envisioned an urban space with suburban attributes which would, ‘…offer light, air, architectural distinction, playgrounds, and safety from muggers, automobiles, and suburban boredom, plus all the cultural amenities of a great city, from swimming pools to art galleries,” (Fischer, 1975: 76). It was hoped that a development, such as this one, would draw the middle-class back from the suburbs and increase the city’s tax base once again. Another issue, which again Segal’s vision complemented and addressed, was lack of affordable housing. 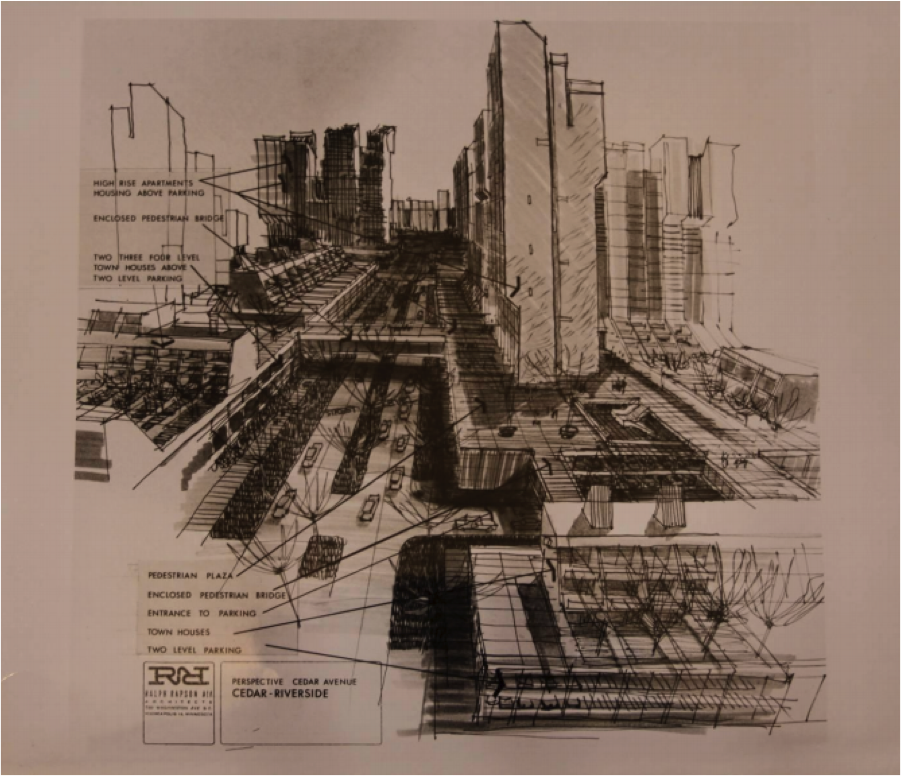 Urban renewal had succeeded in “…materially reducing the supply of low-cost housing in American cities,” at a cost of three million taxpayer dollars (Hall, 2002: 253), in addition to segregating the poor into inner city high-rise public housing projects. These projects were also usually located on the periphery of cities and were disconnected from employment and transit. Minneapolis’ NTIT was ideally located to solve these problems and increase the supply of affordable housing.

The prominence of institutions within Cedar-Riverside neighborhood (higher-education establishments and a medical campus) led to the belief that there would be demand for housing and also employment opportunities for residents of the NTIT. It’s close proximity to downtown Minneapolis also presented additional employment opportunities and easy access to transportation nodes. The poor were also not to be segregated as they had been in the past, but instead would be integrated into a mixed income community. Segal had this to say about the make-up of residents it hoped to draw to the NTIT, “The residents will be a rich mix of ethnic groups, middleclass professionals and poor people, artists and housewives, students and businessmen, the young and the elderly,” (Fischer, 1975: 76). Housing was divided between a mix of market-rate and subsidized apartments for both students and low-income individuals. Riverside Plaza’s subsidized housing is a lasting legacy of the NTIT project. It continues to this day to provide much-needed affordable housing in Minneapolis.

The NTIT never materialized beyond Riverside Plaza, which became its first and only stage of development. Numerous factors halted its further advancement including neighborhood protests, court cases, dwindling funds and President Nixon’s moratorium on housing and community development assistance. What was supposed to remedy the ills brought onto cities by urban renewal has instead, in its incompleteness, become one of Minneapolis’ most misunderstood landmarks. 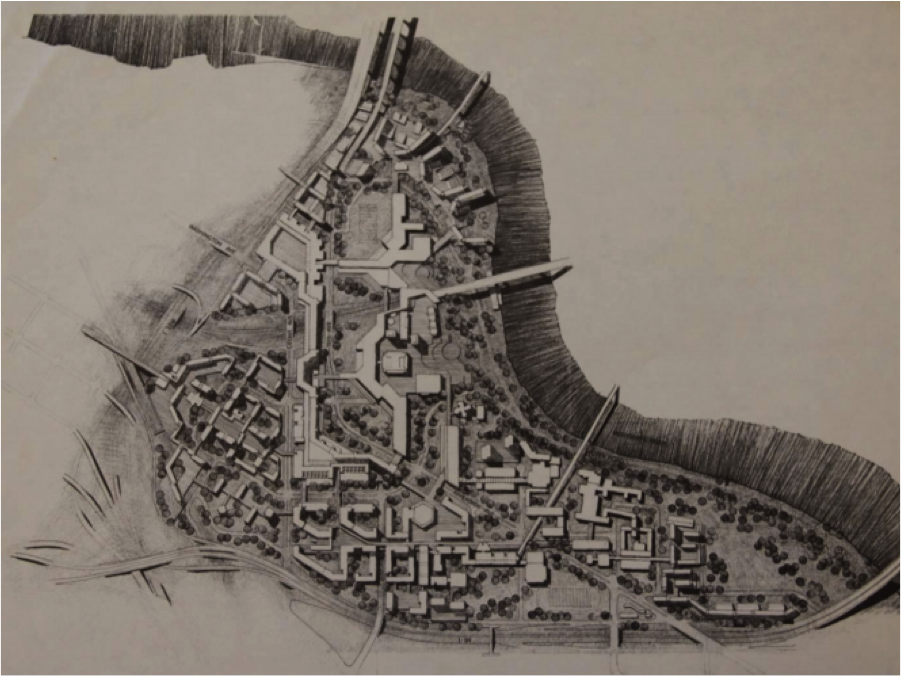 Full extent of the vision for The New-Town-In-Town. (Source: Minnesota Historical Society, n.d.)

Kevin Lynch, the noted urbanist, paints the need for imageable landcapes in his book The Image of the City. He describes the landscapes that achieve this as visible, coherent and clear and which allow one to feel quickly at home in new surroundings (1960). Riverside Plaza’s incompleteness and obscure history have kept the Cedar-Riverside neighborhood from being an imageable landscape. Hopefully, by knowing and understanding Riverside Plaza’s history and recognizing its unique place in America’s urban history along with its continued contribution to Minneapolis’ affordable housing stock, one can see this landmark as positive rather than negative. Having this change of mindset could then open up the door to a vibrant, multi-cultural neighborhood that has been overlooked for far too long. 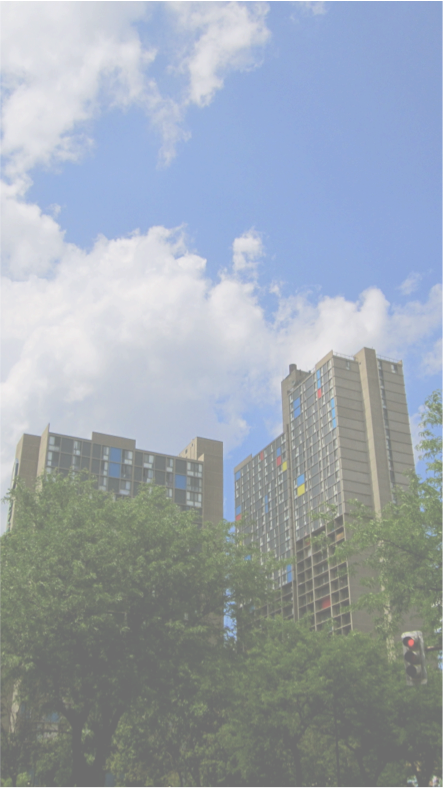