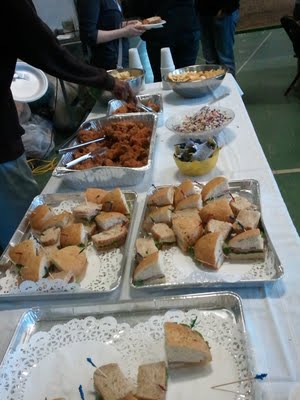 Last fall, members of River of Life Lutheran Church at 22nd and Fremont wanted to maximize the use of our space.  (I attend and am the Vice President of the congregation.)  We began to look into ways that we could serve our community and those in the most need.  My pastor called me up one day and asked if I could join other church council members in touring several homeless shelters.  We wanted to explore whether the gym could be used as an overflow shelter for the winter, and needed to understand how we could accomplish that.

Fortunately we had plenty of support from partners at the city and county level, as well as partnerships from other Minneapolis shelters.  We heard the concerns of residents in the Hawthorne and Jordan neighborhoods and JACC board member Todd Heintz was crucial in building a relationship between our church and Jordan so that we could move forward.  KSTP reported when our permit was approved by the city, and we were on our way.

Last Friday, our temporary shelter permit expired, and we “celebrated” the closing.  Celebrated is a tough word to use here because even a homeless shelter is a band-aid that alone does not address the root causes of homelessness.  Furthermore, our service to the homeless is, for now, ending.  It’s far more preferable to celebrate a landmark achievement instead of an end of a program when there is still work to be done.

But River of Life congregation members gathered with our partners from St. Stephens and elsewhere, as well as community members and several politicians who lent their support.  Hennepin County Attorney Mike Freeman, County Commissioner Mark Stenglein, and Minneapolis City Council Members Don Samuels and John Quincy were in attendance.  As noted above, Todd Heintz was repeatedly thanked for his community support in assuring the neighborhoods that this kind of service could be done in a way that was beneficial for everyone.

When Samuels spoke, he called our shelter “the most important thing that happened in the fifth ward this winter.”  Although the public schools broke ground on a new headquarters kitty-corner to the church, Samuels specifically said that reaching out to those in the greatest need had a greater impact in his ward, and heaped praises on the work of the congregation and partners.  We live in a culture, he said, that creates a natural inclination to glamorous things like the royal wedding, and we need religion to teach and remind us otherwise. 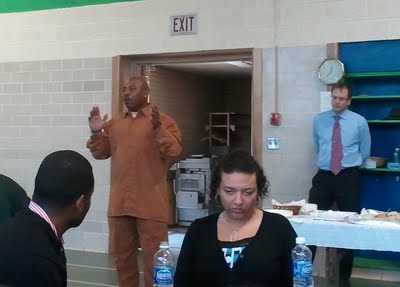 Pastor LeeAnn Pomrenke also thanked those at the city and county level for their support.  Isaiah 58 tells us:

“If you do away with the yoke of oppression, with the pointing finger and malicious talk, and if you spend yourselves in behalf of the hungry and satisfy the needs of the oppressed, then your light will rise in the darkness, and your night will become like the noonday.  The Lord will guide you always; he will satisfy your needs in a sun-scorched land and will strengthen your frame.  You will be like a well-watered garden, like a spring whose waters never fail.  Your people will rebuild the ancient ruins and will raise up the age-old foundations; you will be called Repairer of Broken Walls, Restorer of Streets with Dwellings.”

This is just one of countless passages in the Bible that compels us as Christians to lift up the needs of the oppressed and to serve God by serving others.  So we as a church need to thank our friends at the city and county, and in the community.  By offering their support, they allowed us an opportunity to live out the kind of lives that we as Christians are called to do.

The most poignant speaker was the gentleman in the final picture above.  While it would have felt hollow to bring in homeless people for a photo op, I would have felt even more ill at ease if nobody that was served by a homeless shelter were at our celebration.  This gentleman spoke of how he had reached such a low point in his life that he had no home, nowhere to go, and virtually no relationship with his son.  He came to St. Stephen’s, and was given some of the most basic things we all take for granted:  food, shelter, and a sense of dignity and self-worth.  Folks believed in him, referred him to the right places, and stuck with him.  This man is now in a steady job, in stable living, has been clean and sober for years, and has restored his relationship with his son.  Everything he has, he received because someone reached out to him in his hour of need.

So last Friday we celebrated what that means when we as Christians have such opportunities to remove burdens in peoples’ lives.  River of Life and our friends thanked our supporters, we praise our God, and we look for new ways to serve.