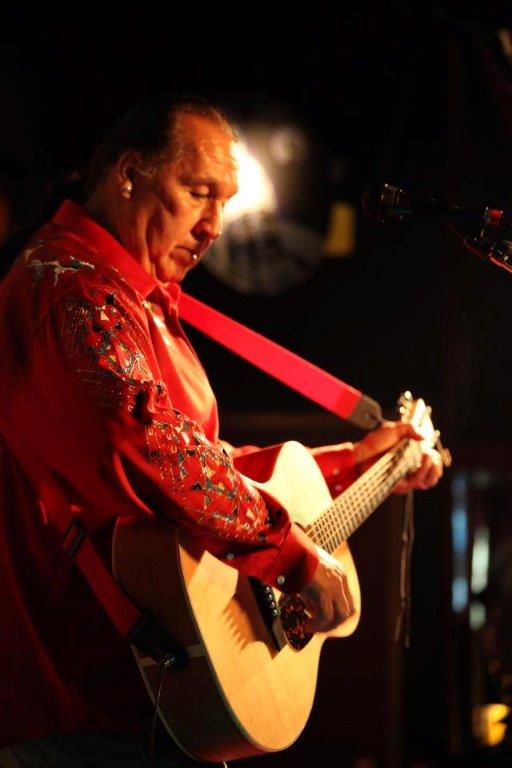 “I can’t play the blues but I got ‘em- I rise up from the ashes like the phoenix bird. The heat burned me bad but made me strong.” The song lyrics by Mitch Walking Elk tell part of his life story, Born in Oklahoma and sent to a boarding school at an early age, his school experience led him to want to make a difference in the lives of young people. He began to dream of himself teaching young kids sitting at desks in a classroom. As a teacher and cultural educator, his story makes a difference.

Walking Elk will perform at  the 38th NUSA Neighborhood Celebration from 6:30 to 7:30 on May 24 at Minnehaha Park.

In the late 1980s, he moved to Wisconsin and was trying to get a job. Walking Elk said, “I was going door to door to all the organizations letting them know I could play music. I stopped in one of the schools and the lady kept me talking, asking me a lot of questions about culture and myself.” About that time the head of the school returned and the lady told her, ‘I think we found our cultural teacher.'”

Hired on the spot, when they asked for lesson plans, he turned it down.  Walking Elk told her right out, “Bye, I don’t do lesson plans, don’t know how.”

The promise of a full-time job was a powerful lure, so he returned a few weeks later, saying, “I guess I can do lesson plans.”

Walking Elk started off co- teaching, and quickly discovered difficulties. He didn’t see culture as something to be taught in 15-minute increments. Over the three years he was there, the “Indian Community School” became the strongest cultural school in the nation because the children involved learned about themselves by learning their culture and traditions. As young adults, they continued and came back to it over time.

“I called it the Magic Time,” said Walking Elk. “The spirits wanted those children to know something, and I got to be the vessel it came through.” He believes the spirits put him there and that dreams set him on the road to being a cultural teacher in motion.

Oklahoma born and raised, Mitch Walking Elk is of Native American descent. He is an enrolled member of the Southern Cheyenne and Arapaho Tribes of Oklahoma as well as part Hopi and Choctaw. He has been a singer, songwriter and musician it since he was 13, when he co-wrote a song that he and his friend sang together a cappela in a talent contest and won.

The song was so good that they got accused of stealing it from the radio. While that was humiliating it was also inspiring, it meant they were good.  While he wrote more over time, it wasn’t until the mid-1980s that he recorded an album. A friend, Boyd Bristow, helped him record his first two of six albums.

Bristow also introduced him to a few musicians in the business. Walking Elk recalls that Dicky Lee out of Nashville, “talked to me like a human being, he liked my music. He gave me an outlet to send my music for feedback, if he could use it he would give me a call.” Once he called and said “Just called to let you know that was a real good, what you sent, I just wanted to call and tell you that”. Encouragement is always good.

Mitch has never had the money to produce his albums, but that hasn’t stopped him from putting his music out there.  His music includes country, folk, protest and the blues. In May, he was asked to be a presenter at the 14th Annual Native American Music Awards (NAMA) whose mission is “Devoted to bringing Indigenous Music to the World’s Consciousness.”

In the early 80s, beginning  in the classroom, Walking Elk played guitar and sang country folk music, as a way to talk about his life story. After releasing his first album, “Dreamer,” he was Inspired by the experience of recording to put together what some would call protest music, but which probably should be called truth telling music.  The lyrics and rythyms offer a perspective and story that is often not told in the history books. His six recordings also teach about the atrocities done to Indigenous peoples around the world. Walking Elk has traveled to many countries and at least five continents, performing and hearing the stories of the people in those countries, while he teaches through song the stories of home.

Walking Elk defines himself as a singer, songwriter, musician, actor, and political and environmental activist from an Indigenous perspective. He blew the lid off of being labeled as a folk singer with the release of his fifth CD, a blues recording titled, “Time for A Woman,” which won him Best Blues Recording at the 2005 Indian Summer Festival in Milwaukee, Wisconsin.

“Up from the Ashes,” his sixth recording, won him “Best Blues” Recording of 2013. When asked how it felt to win that award, Mitch said, “I don’t have my head in the clouds—and both feet on the ground, I know what’s up. I was honored. I figured I won two blues awards so I am going to have to get better at playing the blues. It’s another step in the right direction.  In the early days, I could write at least two songs after every show just from the energy of playing. Not these days, I don’t isolate myself and write music. I take what comes however it comes and whenever it comes. I probably have enough material to produce both a county and protest album.”

Now Walking Elk is working for and with an inner city alternative school, the Guadalupe Area School, located on the West side of St Paul, as counselor, teacher and cultural community support person.  He wants to encourage his students to activities beyond the street and gang life mentality. He gets frustrated with knowing that life and wanting them to want more.

Being a teacher, counselor and cultural worker is the life beyond the music. Culture involves the science of life, the art of living, and all aspects of how to use what you know for the betterment of a people. Walking Elk shares by example with the indigenous communities that want to have the awareness of culture beyond just survival.  His years of teaching came from his years of experience, as well as from his own school of hard knocks. Those choices that made him stronger, as the song says. His music also has given him an outlet to share his wisdom.

Walking Elk’s teaching involves creating a cultural experience that speaks to the realness of culture to him. He starts each quarter with a traditional meal that he teaches his studenets how to make and the importance of being thankful for the food they eat. His classroom quickly becomes a studio where they might create moccasins, rattles, dream catchers or items of importance. He exposes students to all elements of a whole culture in this classroom. Down the road, he hopes to see his impact: teaching young people about a path to making their dreams possible.

Walking Elk is preparing for his sixteenth tour of Europe this June, beginning  with a local house concert with his musical comrade, Wade Fernandez on May 23, and a performance at  the 38th NUSA Neighborhood Celebration from 6:30 to 7:30 on May 24 at Minnehaha Park.  Wade Fernandez will join Walking Elk on his European tour where they will perform in three different countries. Check out the official web site mitchwalkingelk.com for their tour schedule and take a listen to his music. He also performs in a yet-to-be-released movie titled” Come and Get Your Love,” and his biography, There Will Be No Surrender, was published and released in Germany in March 2012.

Walking Elk said his greatest accomplishment to date is simply surviving and overcoming the obstacles placed in his life’s path. The love affair he has had with music definitely contributed to that accomplishment. “I’m still waiting for success, he says.” I’ve had a number of small victories along the way but no great battles have been won as of yet. To become an overnight success after thirty or so years in the business would sure be nice.”