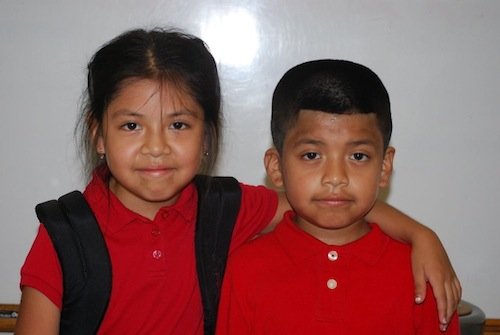 In an effort to improve literacy skills for their mostly Latino, high poverty population, Risen Christ Catholic School will be transforming into a dual immersion school beginning with next year’s kindergarteners. The Catholic school, a K-8 elementary based in the Powderhorn Park area, has been selected to be a part of the Two-Way Immersion Network for Catholic Schools (TWIN-CS), and becomes one of 10 accepted schools across the country.

Risen Christ currently has 75 percent Latino students, with 96 percent qualifying for free or reduced lunch, according to Helen Dahlman, the school’s president. Most of the students are native Spanish speakers and the school has been “addressing the challenges of the achievement gap for a number of years,” she said.

For assessment, Risen Christ uses the Northwest Evaluation Association (NEWA) which measures academic progress three times throughout the year. Dahlman says they choose this particular assessment tool because it uses a data bank of questions that are referenced to state standards, but changes levels for the student after each question, in order to most accurately find out what grade level they’re at.  For example, if a third grader takes the test and doesn’t score at a third-grade level, the questions change. so that the test can specifically say that the student is at a first grade or a second grade level — not just whether they are proficient at a third grade level.

When the school took a look at its data, they found that while students in kindergarten through second grade were making progress in literacy, their achievement started to taper off in fourth, fifth and sixth grades. 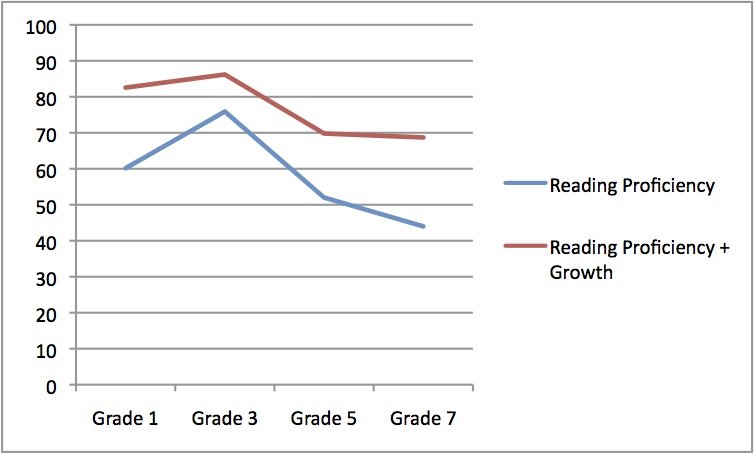 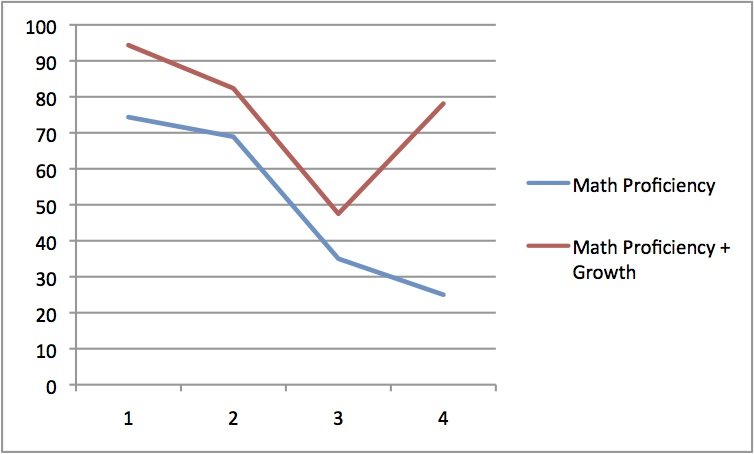 The blue lines represents the percentage of students who are at grade level (grades 1,3,5,7) by the end of the school year in 2012-13.  The red lines indicates the percentage of children who are at grade level and/or who made more than one year’s worth of growth during the academic year, narrowing the achievement gap. That’s particularly significant because if lots of students begin the school year more than a year behind, even a full year’s good progress won’t bring them up to proficiency at grade level. However, accomplishing more than one year’s improvement does narrow the gap.

The school did some research and looked into the Center for Applied Research and Language Acquisition (CARLA). “They helped us figure out that it is a language acquisition issue,” Dahlman said.

They deduced that the native Spanish speakers could be taught enough English to get by on early grade tests, where the focus of the tests was on simpler skills, such as vocabulary. At the upper grade levels, questions focus on synthesis and analysis. The older students didn’t have the strong literacy skills and academic language skills in either Spanish or English to be able to do well on the more analytical tests for the later grades. That’s because for many of the students, there isn’t a strong literacy foundation. Their parents may not have strong literacy skills, even in Spanish.

“The kids don’t have pre-literacy in their first language, so with the second language there was massive confusion,” Dahlman said. The idea with the dual language approach is to be able to provide that literacy and academic language in their native language while at the same time teaching them English.

Currently the school doesn’t have a pre-kindergarten program, because they don’t have the space, but Dahlman said they have a relationship with Joyce Dual Immersion Pre-School.

Risen Christ decided they needed to do something fundamentally different, and so they decided to apply for TWIN-CS and were accepted last spring.  The network will bring in different kind of support, such as experts from Boston College who will provide professional development and resources. The school will also be part of a community of other schools and practitioners they can speak with either online or in person. Plus, the program sets up other opportunities, such as providing common assessments and a stipend for a local mentor, Don Miller from the University of St. Thomas, who will provide on-site coaching for the teachers. 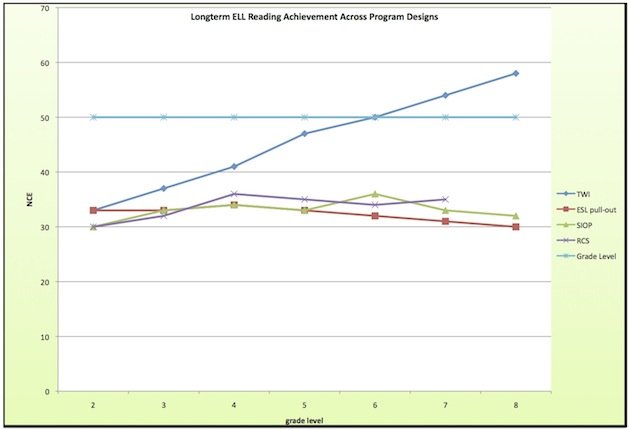 Helen Dahlman said that the dual immersion model, called TWI for Two-Way Immersion in the chart above, is shown in national studies to be the most effective instructional model for English learners in developing English language proficiency/literacy. Dahlman explained in an email accompanying the chart:

“The national data is from a longitudinal study by Thomas and Collier out of the Center for Applied Linguistics in California.  The TWI line represents two-way immersion programming and its success in erasing the achievement gap.  The SIOP line represents an instructional model known as sheltered instruction, where teachers in regular classrooms se specific, targeted strategies to help make English language content comprehensible to ELLS while they are also learning the English language.  The traditional pull-out line indicates what it says, the most common approach to serving ELLs, where they are pulled out of the regular classroom for small group or individual tutoring on basic English language skills, which they are then supposed to apply to their learning when they are sent back to their classrooms.  The RCS line represents the performance of our current Risen Christ School 8th grade class.   As we  currently use a combination of the SIOP and pull-out models, it is no surprise that our results are consistent with those of the two models on a national scale.”

Though next year will be the first year Risen Christ begins its dual immersion program, they’ve been steadily including more Latino cultural components into the curriculum and culture of the school. They have bilingual staff members who can speak with parents, and a number of teachers who speak Spanish as well. In addition, a year ago all the teachers began taking basic Spanish.

Plus, “we try to have a lot of visual representation in our building,” Dalman said. “We make sure our art and our environment also reflects our diversity and our cultures.” The school has recently acquired flags of all the cultures of origin for the different students to “celebrate the heritage of all our students.”

Risen Christ was formed in 1993. At the time only five percent of the students were Latino. In the last seven or eight years, the numbers of Latino students started to surge, and then three or four years ago, the school crossed the 50 percent mark. “We are a reflection of the community in which we are located,” Dahlman said.