Sometime when a controversial issue just keeps going in circles, it can be helpful to “flip the script” and imagine how it might go down, if the same were happening but the group being impacted was from a different socio-economic class.

Imagine the outrage that would ensue if the following was to occur:

North Minneapolis, Fake News Network: In an effort to accent the positive cultural and economic successes of Edina, North Minneapolis Park League football teams decided to name their teams after Edina sites and neighborhoods. Now the “Morningside Corporate Marauders,” the “Icy Interlachen Institutions,” and the “Betterthanu Bredesens” are becoming common place gridiron competitors. At a recent game all the fans of the Morningside Marauders showed up in white-face and chanted in a faux Minnesotan suburban accent, “Morningside Marauders will acquire all your assets! Betterthanu Bredesen prepare to disinvest!” At one time in a previous contest the Icy Interlaken Institution’s mascot, a stogy old banker (similar to Mr. Dawes Sr. from Mary Poppins) was hung in effigy from the opponents goal posts. The fans claim there is no disrespect intended to the people of Edina, in fact one supporter of the Betterthanu Bredesens said, “we would have never known about Bredesen had it not been for our team choosing them as our mascot, really the people of Edina should be honored, we are keeping their history alive.”

(This story does not express the authors views or opinions about Edina nor is it intended to disparage the fine people of this community, This is written only for educational purposes, making an illustration in the absurdity)

The above is fiction; in part because North Minneapolis teams are too classy to mock another community and culture. The above is also offensive, why?

This is obviously intended to distill some of the discussion around the use of Native Americans in general as team mascots. However, it falls short in one profound difference; the people of Edina have not been traumatized by generations of oppression and abuse. In this way, this illustration cannot account for the layered complexity of the present discussion regarding the “Washington Redskins.” The adults and children of Edina would be annoyed by such foolishness; Native American youth and communities are shamed and have felt powerless for years to reclaim their right to control their image. This is also why the team name “Vikings,” or “Fighting Irish” fall into a whole different category, the descendants of Vikings and the Irish do control the way their ancestors are portrayed. At the heart of the discussion is not what “word” is correct or incorrect, but who has the right to control how a term is used and portrayed.

When I was in High School we were the “Indians.” We had mascots with feathers and deep red/brown skin. While I cannot think of any classmates, or even residents in our small Iowa town who had more than a drop of Native American blood, we all knew we were living on land where Native people had lived and hunted for years, before our ancestors had forced them out. Most farmers in that area had found arrow and spear heads on the land. Perhaps being the “Clarksville Indians” did force us into some recognition that we had taken our home from them. But there was no real acknowledgment of the true names, culture, or language of the people who had preceded us on the banks of the Shell Rock River. It was only years later, through interactions with Native People, that I became most aware of the privileges I was given as a white man in the US of America and how those privileges, awarded to me, came at a direct expense to Native and African Americans, as well as other persons of color.

True, we cannot go back and change the past. But I can demand that how we move forward from this point, how we discuss it, how we memorialize and celebrate it will not continue to reinforce the injustices committed and the myths perpetrated. This begins with including the voices of those who had no choice in the naming of the team, but had their image appropriated, their culture distorted and their honor tarnished by converting a proud people (be it the people of Edina or the First Nations of this Land) into a one-dimensional mascot.

The present concern with this mascot did not begin with the NFL or the NCAA, but with the Oneida Nation, who proudly announce that they were the “United States First Ally.” The Oneida Indian Nation has released a series of radio ads requesting a change be made, you can her them here. 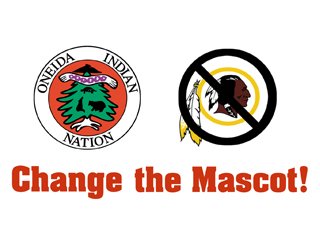 In the present discussion regarding the name of the football team from Washington, the questions are:

Whose voice will you listen to?

Whose voice will you amplify?