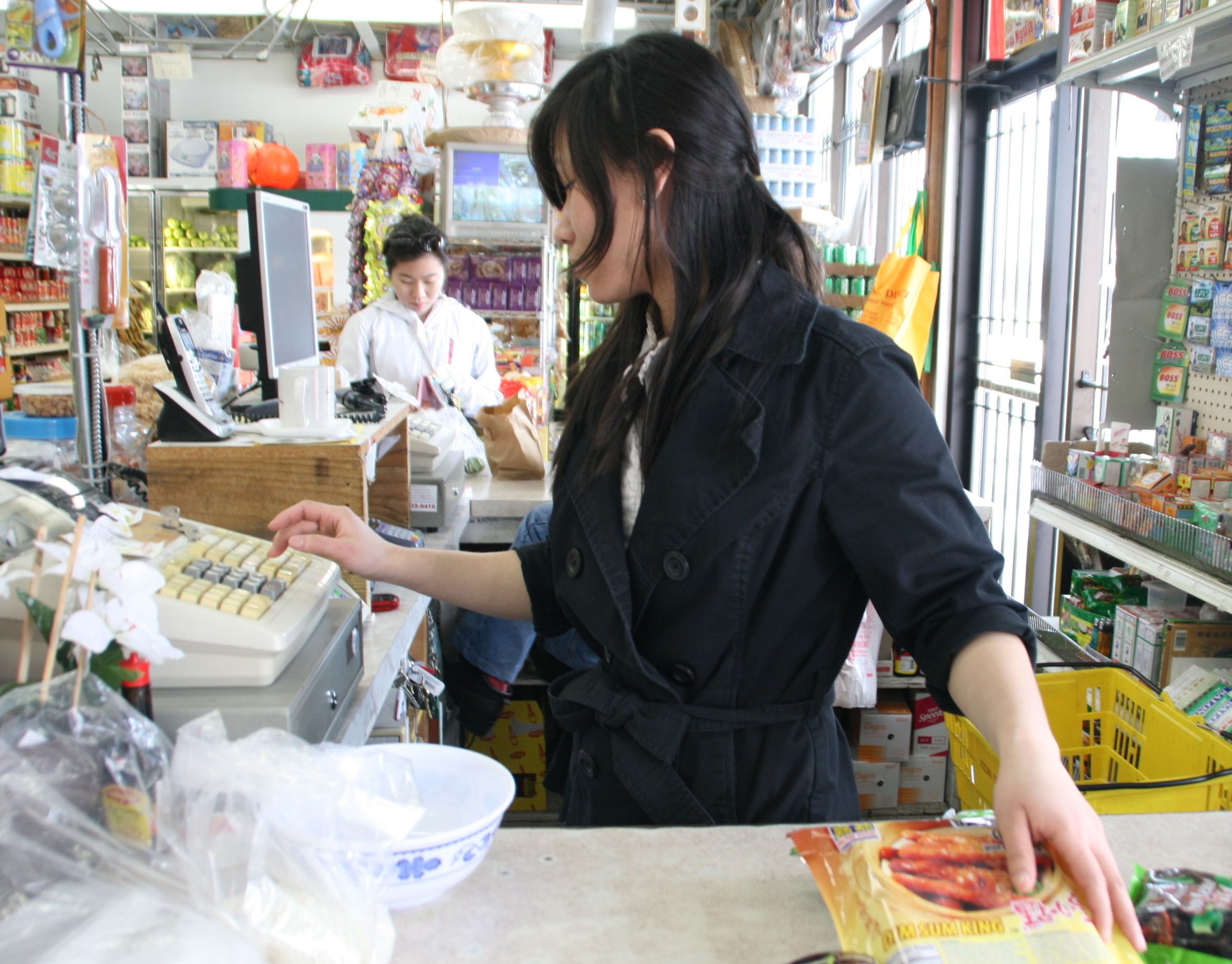 On a recent visit, Asian Direct Oriental Market, a little mostly Vietnamese and Cambodian store in Richfield, was filled with customers, even as the sky was filled with April snowflakes.

Two men behind the meat counter smiled at customers. A young cashier named Polan Sar, who came to the Twin Cities from Cambodia six years ago, was happy to talk as she helped stock the shelves. “The fresh vegetables and the rice are the best sellers,” she said. She doesn’t cook the Asian foods she sells. “I don’t have the time. I work seven days a week. When I come home my mom has dinner for me.”

The store is bright and clean, if a bit cramped. Aisles are narrow and shelves are jammed with products. Even the freezers are completely filled. There you can find frozen seafood: red fish, red tail, surf clams, whole pomfret, ca com tha and various squid; carving squid, squid rings, cleaned baby squid, and squid heads. I found frozen Vietnamese bananas, frozen wood-apple meat (a type of quince), and best of all, frozen boneless chicken feet to make dim sum. (I didn’t know it came boneless.) 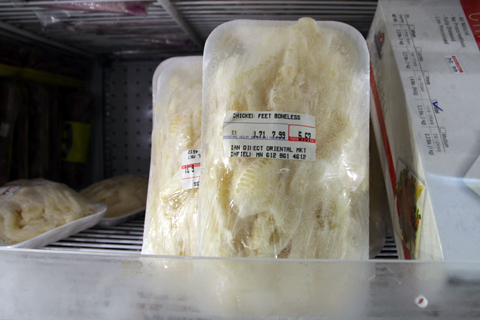 Other dim sum is ready to heat and eat, including more chicken feet (called “claws,” these with bones) and pork spare ribs, both in black bean sauce. There’s also the usual variety of filled meat and vegetable dumplings. 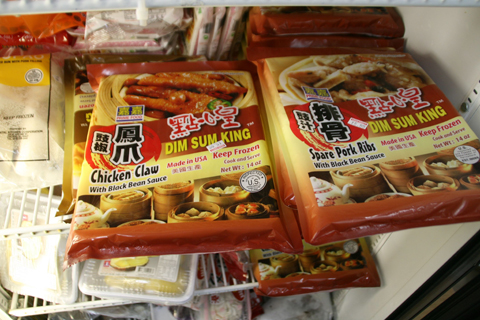 Or, take a chance and buy one of the whole frozen durian fruit or some of the small packages of already prepared durian. This fruit, popular mostly in Thailand and Malaysia, is gaining acceptance in Vietnam where the local name translates as “one’s own sorrows.”  It’s known all over Southeast Asia as “the king of fruits.” Fans—and there are many—say if you can get past the putrid smell you’ll find it has a taste right out of heaven. 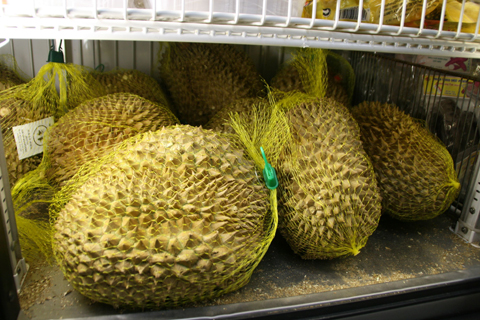 But, the smell of the fruit is so bad that in Thailand, you can’t bring one on a bus or into a hospital or a hotel room. British naturalist Alfred Russel Wallace described the flavor; “It is of such an excellent taste that it surpasses in flavor all other fruits of the world,’ admitting he was first put off by the aroma. Food writer Richard Sterling described the odor as, “pig-shit, turpentine and onions garnished with a gym sock.” Even Andrew Zimmern, host of the Travel Channel’s show Bizarre Foods, who likes almost everything he tries, hates durian. 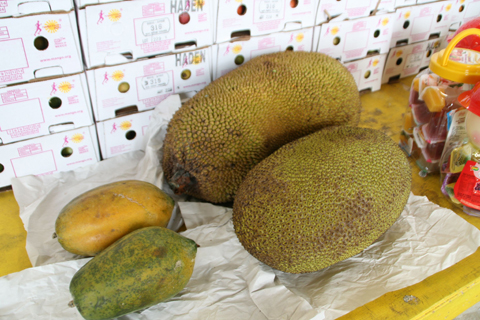 If you’re looking for fruit that’s for the less adventurous, pick up  one of the large jackfruits (a popular ingredient in Vietnamese desserts) or buy couple of the sweet yellow mangos, ready to cut open and eat. The yellow mango season lasts only a couple of months, so get these while you can.

Most of the shoppers were Asians, but a red-haired teen stopped by for his favorite canned Asian soft drink and a young couple from Haywood, Wisconsin spotted the store and came in specifically to buy rice paper and sticky rice, something not available back home. It was to make spring rolls, they told me. 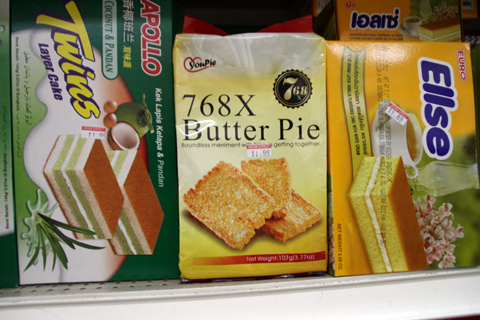 A section of the store is devoted to snack foods. For something sweet, you could try the durian candy, an easy way to see if you’re a durian lover. Or try a pastry called a “768X Butter Pie” with a slogan on the front: “Boundless Merriment With Friends Getting Together.” For something on the savory side, a saltine-like cracker called Sky Flakes is packaged in an American flag theme. Maiow Miaow (the House of Snacks) crunchies come in your choice of cuttlefish, chicken, prawn, udrangmas (which seems to be another kind of prawn), potato and green peas flavors. 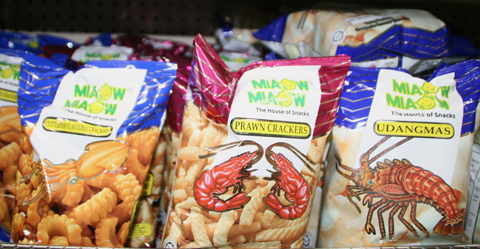 A business note: Maiow Maiow, a Malaysian company, may be trying to take over the world. Their website claims “In September 1999, we wrote a new historic page in Miaow Miaow achievement as our first step onto the globalize stage. We are moving aggressively toward the United States of America and Europe Countries. In search of Happiness through co-operation and enthusiasm is the prime goal of our business undertaking.”

Asian Direct Oriental Market shares a building with, and is just around the corner from, the Portland Food Mart Latino and American Foods at the corner of Portland and 77th Street in Richfield. Pull into the shared lot from Portland Avenue but park on the 77th Street side of the building.