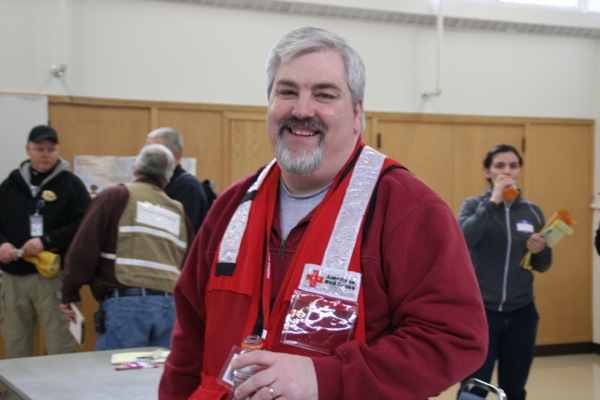 Top boss Tom Tolliver was the shelter manager for the practice day.

Here’s a bit of news you many have missed. Early in the afternoon, on Leap Year Day, the entire metro area was hit by a severe winter storm. What started as showers had, by nightfall, turned into a unremitting freezing rain. Travel was impossible. Richfield was especially hard hit with a large area without power. In some parts of the city, sewers were backing up. Some of those affected managed to make their way to a shelter set up at Richfield Central High School.

There was, of course, no such storm, but the City of Richfield wants to be prepared in case of such a disaster. So, early Saturday morning, dozens of volunteers from the Red Cross, the Salvation Army, the Community Emergency Response Team, local police reserves and a coalition of animal shelters began to show up at the high school for Richfield’s second emergency response simulation.

In addition to the professional first responders, volunteer victims began wandering in, playing roles including a displaced homeowner, an elderly man with dementia and a homeless man with a head wound and a hidden bottle of vodka. And there was me, playing a pushy member of the media.

“This exercise is to teach new volunteers,” said Salvation Army veteran Julius Zaccagnini. Zaccagnini, who has seen the aftermath of five hurricanes since 2003 and worked a stint after Hurricane Katrina, watched as four of his new volunteers ladled soup into Styrofoam cups and heated hot dogs for the few people who came. If a real disaster happened, said Zaccagnini, his people would be preparing and serving food to perhaps a thousand people, at least until the food ran out.  “We won’t turn anyone away,” he said.

Many evacuees brought their pets. While most people were sent to register and then to claim their cots in the gym or to a meal in the lunchroom, people with dogs were directed first to the  school district bus garage.

Since the Pets Evacuation and Transportation Standards Act was signed into law, most disaster emergency shelters have made accommodations for companion animals. The law, passed in 2006 by a vote of 349 to 24, was a response to media coverage of Katrina dogs stranded on roofs and of people refusing rescue when their pets weren’t allowed to go with them. Graphic images of a crying nine-year old boy having his pet dog, Snowball, ripped from his arms as he boarded a bus to safety, changed forever how pets are treated during disasters.

The garage that housed the animals was chilly, but it was protection from the weather. Only about 20 dogs were there for the exercise, but a trailer from the Minnesota Animal Disaster Coalition, able to hold at least 100 folding dog crates, was parked in the garage. Volunteers would be able to set up crates in less than 30 seconds, said to Howard Goldman, the Minnesota senior state director for the Humane Society of the United States, who organized the pet shelter. There would be plenty of food for dogs, cats or exotic animals, too.

Owners are checked in and given a special ID and paperwork, needed if they want to claim their animals to take home, to take for a walk or even for a few minutes for a snuggle. Security is tight. In real shelter situation, Goldman said, some people come pet shopping, hoping to use a catastrophe to get a free pet.  “Security’s worked well,” he said about the simulation. “Someone claimed he was the owner of a black lab. We checked the system and the dog had a different name. We wouldn’t let him near the dog.”

Meanwhile, in the human shelter, two volunteers, playing scenario evacuees, said that their homes had no heat. In real life, both brought their dogs to help them role play. Laurie Koechlein, whose therapy dog Sadie visits nursing homes and Nancy Morales, who owns a lab named Nora and a pug mix named Butter, talked about the exercise over cups of coffee. “So far it’s been slow here and a little disorganized,” said Morales. “But this is how they get better.”

It was hard for a reporter to get access to these two women, or to anything else. Playing the role of a reporter meant that I wasn’t to be allowed access to most of the shelter. Top boss Tom Tolliver, as the shelter manager, made sure that any attempt I made to get into the shelter to interview evacuees or to take photos, was met by security. One security guard, William Kerus, a former captain of the retired New Brighton police reserves, physically blocked my way into the shelter area until a PR person was found. Even then, I was blocked from going into the rooms where the real story was, in order to protect the privacy of the victims of the storm, they claimed.

“Everyone walked away from this thinking it was a very good test,” said Ruth Talford, Readiness Coordinator with the American Red Cross. “Some things didn’t go perfectly, and that’s good. If things had gone perfectly, that would mean that we hadn’t tested enough. There were a lot of unforeseen problems with the exercise, and a lot of volunteers we were expecting didn’t show, but it was a good collaboration among the groups.”