Mu Performing Arts has started its 2009/2010 season with a moving and spirited musical based on the Filipino farm workers of the 1930s.

The play was inspired by a short poem by prominent American poet Carlos Bulosan, a Filipino-born writer who gained fame posthumously after passing away in Seattle in the 1950s. His novels on the Asian American, Filipino American labor experience in the canneries and farms of Depression Era America impacted the social justice movement enough to get him blacklisted by the FBI for his activism.

The Romance of Magno Rubio explores the dreams and frustrations of a group of cooped-up Filipino immigrants in romantic verse and using Filipino traditional music and dance.

“I am so excited to share this show with an audience,” said Randy Reyes, who stars as the young Magno Rubio, a immigrant character who dreams of a romantic affair with a beautiful American white woman he corresponded with in the Philippines, to the ridicule of the bunkhouse workers.

It’s a role that a Julliard graduate Reyes cherishes after building a celebrated careers in mainstream theater, performing Shakespeare at the Guthrie and with other Asian American performances in Mu’s Flower Drum Song at the Ordway.

“The character resonates so deep inside me,” he said. “The language, the physicality, the personality of Magno are at the core of my DNA.

“I’ve learned so much from Magno,” he added. “His attitude is impeccable. His joy is interminable. Through the darkest days, he finds hope. He represents the Filipino spirit.”

Reyes said that playwright Lonnie Carter has done an amazing job working with composer Fabian Obispo, to bring poetry, rhythm, music and movement into a moving story on migrant workers in 1930’s California.

“It is truly a theatrical experience,” said Reyes. “The play is very physical and I’m exhausted at the end of every show.”

He also credits Orlando Pabotoy with directing the piece that he first created for the Ma-Yi Theater Company, which won a 2002 Obie Award.

“I first heard about The Romance of Magno Rubio when my friend Orlando Pabotoy, played the lead in it’s premiere in New York City,” he said. “Orlando was a year ahead of me at Juilliard and when Rick Shiomi (Mu Artistic Director) was considering producing the play. Orlando was my first choice to direct it.”

“He was a big part in the creation of the show, along with the playwright – Lonnie Carter, Ma-Yi’s Artistic Director – Ralph Pena, and the director – Loy Arcenas,” he added. “It’s been such an amazing experience working with Orlando. He’s so close the piece and has such profound insight on the play. I trust him completely and he’s done a stellar job with the show.”

To research the play, cast and crew visited Mexican migrant workers in southern Minnesota to learn about their experience. Just as the Filipino “manongs” more than half a century earlier, Reyes said these workers left their families homeland for the same reason – the pursuit of the American Dream. They are toiling for a better future for their children and their children’s children, he added.

Reyes describes a setting where the characters struggle with health problems related to physical labor and horrible living conditions, and all to send money home to their families. The stress and bunkhouse living conditions create tension among different personalities.

“They didn’t have unions to protect them, and these are the same struggles today,” he said.

Reyes said there are very few plays with Filipino characters, let alone the central cast. He credits an ensemble cast that makes the play succeed. 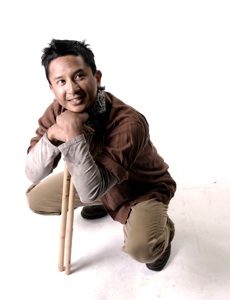 “For 10 days we trained together before rehearsal even began,” said Reyes. “This was necessary because our rehearsal period was only two weeks long, plus tech.”

The experience, according to Reyes, left feeling blessed to tell the story of Filipino men that made it possible for him to pursue his own American dream.

“I’m humbled by their perseverance during a time when they were looked at as dogs, forbidden by law to have relations with White women,” he said. “I am forever ingratiated to them and the families that supported them. I thank them for my freedoms today.”