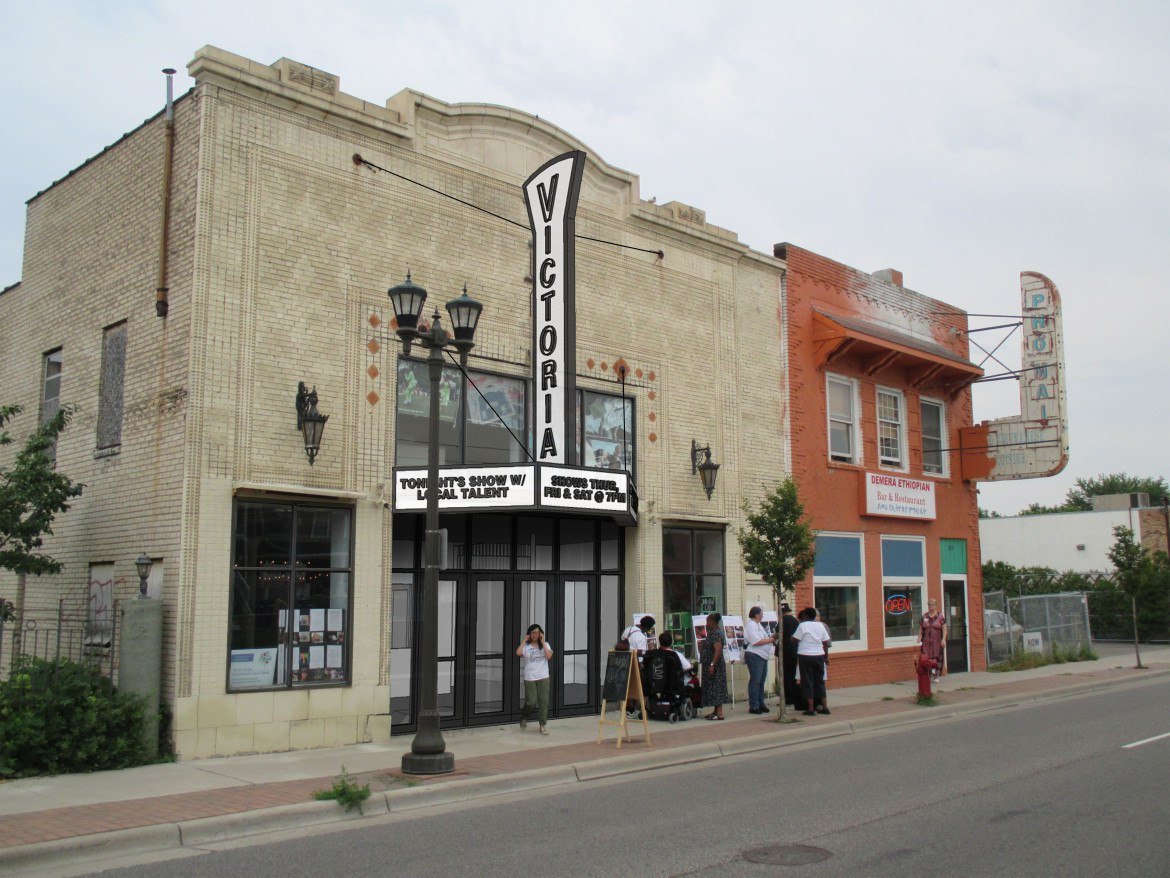 Along the Green Line, just east of Victoria Street and University Avenue, stands a seemingly abandoned storefront with dark windows and a locked door.

But to Denise Mwasyeba, a 25-year Frogtown resident and former chair of the Frogtown Neighborhood Association (FNA) board of directors, it’s the perfect chance to turn the forgotten, historical Victoria theater into a newly renovated center that represents a diverse community greatly evolving from its roots.

“I really got involved in the community because I wanted to make the community better,“ said Mwasyeba. “I loved my neighbors and I loved the neighborhood, and I knew working together we could deal with all those quality-of-life issues—crime, crack, housing—all that kind of stuff.”

When she purchased her home in 1992, Mwasyeba recalled how people used to say they lived in the East Midway neighborhood rather than admit to living in Frogtown. With struggles involving prostitution, drugs and vacancies, the actual artistic and thriving culture within Frogtown couldn’t be recognized. 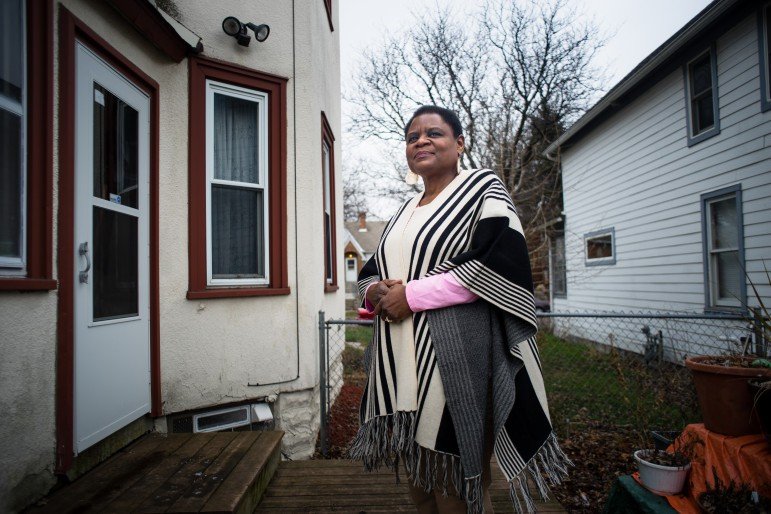 Denise Mwasyeba stands outside the house she’s lived in since 1992, located just a few blocks from the Victoria Theater. Photo by Annabelle Marcovici.

“It’s hard to overcome ideas about your community that are kind of entrenched,” said Mwasyeba.

After almost thirty years of working with the city council, Ramsey County commissioners, the police department, St. Paul public schools, area businesses and city nonprofits, the FNA and district members can finally focus not on crime, but on creative development to engage locals and surrounding communities.

“We can really make our community somewhere that is a destination for people to come,” said Mwasyeba. “Not race past, not try to avoid, but come to Frogtown.”

Now serving as part of the steering committee for the Victoria Theater Arts Initiative (VTAI), Mwasyeba, along with other community supporters, are devoted to giving the landmark venue and Frogtown area a sustainable future.

“There are all kinds of development going on around the city and the Metro, and Frogtown can sort of be overlooked in this regard,” said Aaron Rubenstein, consulter with VTAI. “I think this is the next step along the lines of the vision people in the community have to make it a better neighborhood for the people who are there, and not allow it to gentrify.”

The inspiration struck Mwasyeba and close community members six years ago to revive the old theater, which was once a silent movie house turned Prohibition-era cafe and nightclub in the 1900s. In 2009, however, the building almost became a parking lot site and its materials lost in a landfill.

There was “kind of a community uprising at that point to save the theater,” recalls Sam Buffington, the organizing director at the FNA. “The developers were good people. When they realized there was historic significance to the building and community desire to see it stay, they backed off.”

Since saving the building, the amount of support and awareness for the Victoria Theater has grown. 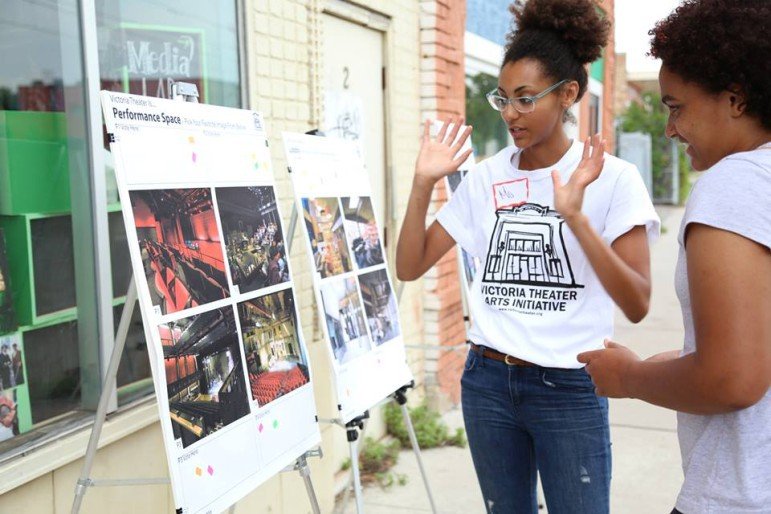 “The political and moral support for the project—and just excitement for it—is really coming from the community,” said Buffington.

The innovative project spurred involvement from various areas and groups of all ages, including the Midway and Rondo neighborhoods, while making partnerships with Kings Crossing senior apartments in Frogtown Square and with students at Gordon Parks High School.

“My personal vision is to see during the day there might be classes for people of all ages,” said Mwasyeba of the theater reopening. “Community meetings, a place where people can just hang out. Maybe at night there might be a play, performing artist or art show.”

From hip-hop music to Irish dancing, or from senior gatherings to youth activities, the theater intends to be of multicultural and multigenerational use, acting as a home for the expression of locals as well as an open door to visitors outside of the Rondo and Frogtown neighborhoods.

To help make this vision a reality, a $75,000 grant from the Knight Foundation’s Green Line Challenge allowed VTAI to formalize.

“We used that money to hire artist organizers and an architecture firm to shepherd the project through the real community visionary stage,” said Buffington. 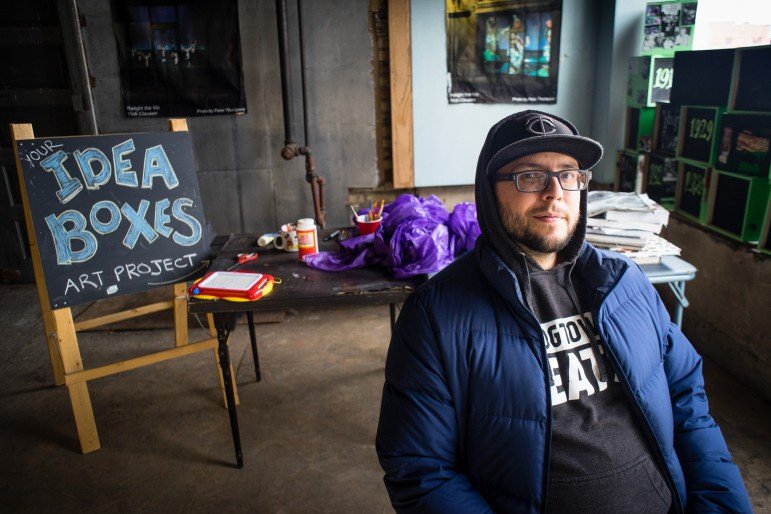 Sam Buffington sits inside the new Victoria Theater space, which he expects will be under construction until 2017. Photo by Annabelle Marcovici.

Community members gave a variety of feedback during two design parties, hosted by VTAI this summer. Building a versatile space available for anything from afternoon meetings, coffee and art events to vibrant evening plays or concerts was unanimously important.

“It seems that the community really wants a gathering spot that expresses the community’s identity and is a spot for diverse cultural expression,” said Rubenstein.

A reveal party in October previewed reconstruction details to the public, such as incorporating two performance spaces in the theater: one space large enough for 125 seats in the back of the building, and a smaller space for about 50 seats in the front, as well as having a small coffee shop and second level office space.

The turnouts for the parties were successful, with over 200 attendees at each event.

“A nice part of this project is that it touches on historic preservation, community building, diversity and art,” Buffington said. “Changing blighted spaces into neighborhood assets.”

In January 2014, the Twin Cities Community Land Bank stepped in and purchased the building for VTAI, making the pathway of rejuvenation official. Much like they do for houses, the nonprofit organization, formed by the Family Housing Fund, salvages vacant spaces and provides opportunities for partnering developers.

The next 18 months will continue to involve strong community engagement, business planning, and fundraising in the form of foundational support, donations, campaigns and outreach to government sources and entities.

A month-long crowdsourcing campaign in November, called Give To The Max, helped VTAI raise enough funds for an antenna needed for a partner organization, Center for Hmong Arts and Talent’s low power FM community radio station.

The online station, WFNU, currently serves the greater Frogtown area and will eventually be housed at the restored Victoria theater.

“One of the things we learned from this crowdsourcing campaign for the radio is that there are people willing to donate money, even though this is not a wealthy neighborhood,” Buffington said.

In the eyes of Mwasyeba, nothing can hold back the passion of the community or the possibilities of the theater in the Frogtown neighborhood.

“The sky is the limit,” she said. “Folks think other folks live in the inner city because they have to. I love the inner city. I love the convenience of living so close to University Avenue and I love that we are a community that is very diverse in age, race and talent.” 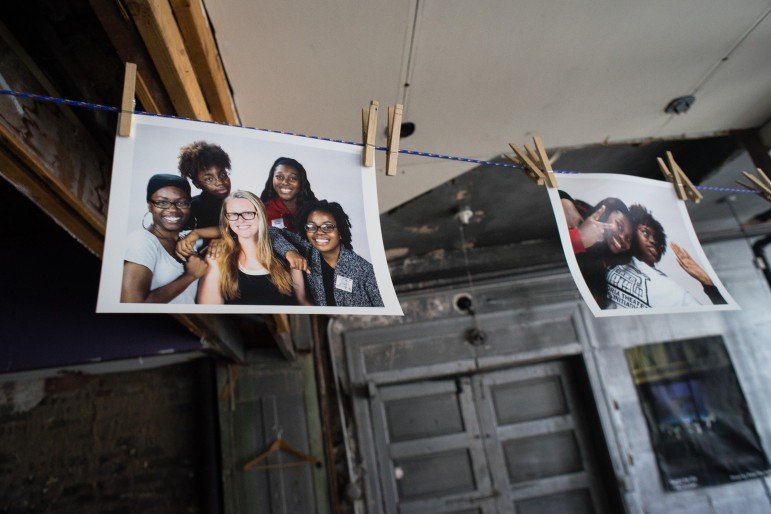 Photos of Victoria Theater youth fellows hang from a clothesline inside the new theater. Photo by Annabelle Marcovici

Editor’s Note: This article has been corrected to show the total number of seats the Victoria Theater will have and to clarify Sam Buffington’s role with the VTAI.