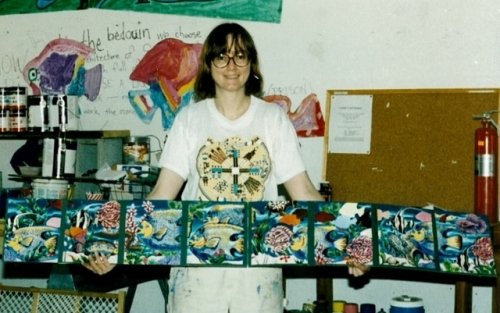 Leisa Luis with the prototype of the mural

On Saturday, June 14th, the Lyndale Neighborhood will be celebrating our annual Fish Fest on the street in front of the Garfield Aquarium on 33rd and Garfield. To prepare us for the annual festival, I interviewed Lyndale’s Steve Lick to discover the origins of the fish murals and the celebration.

In the early 90s, Steve Lick and his friend Leisa Luis moved to Minneapolis from Colorado. Steve lived near to the substation on the corner of 33rd and Garfield, and the building caught his eye. It was a bit of an eyesore in the neighborhood with boarded up windows, but he saw potential in it. The structure reminded him of the the Shed Aquarium in Chicago, which he had visited as a kid. He imagined covering the boards with paintings of fish.

Steve had technical experience from painting houses for years, and Leisa, an artist, had design experience. Together they pitched the mural idea to NSP, the owners of the building at that time. NSP showed little interest until LNA supported the idea and proposed a way to fund the project.

By 1995 the plan had evolved and the funding was in place. It had become a community project that would involve local kids and families as well as six teens from the City’s Summer Youth Employment Project.

Leisa and Steve and their team of teens worked out the overall design leaving room for many others to contribute. They went to local aquariums to make drawings and to decide on the main schools of fish to be used in the mural. Additionally, the youth chose to incorporate elements from their cultures—for example, the mural includes an eel with a Native American beaded pattern, coral with traditional Hmong color patterns, and a Jamaican flag fish.

The panels for the mural were painted off site, in a what is now the Jungle Theater. Many families and kids came to open houses to participate in the painting. “We set it up like a paint by number,” Steve explained, “so you could chose magenta and paint all the number fours for example.” Kids also designed their own fish, and the smaller imaginative fish on the mural are reproductions of fish made by neighborhood families and kids (who are now adults).

The public unveiling of the Fish mural was the first Fish Fest ever celebrated in Lyndale. “It was a ton of work,” Steve explained, “but it means a lot that it still happens. It’s my claim to fame in Lyndale.” That first year, the celebration revolved around a fish fry, for which Steve and his friends rented fryers. There was a set of fish-themed activities: a fish parade with kids in homemade fish masks, the traditional fishing for prizes pond, they even made “fish prints” using donated overly ripe fish for the stamps.