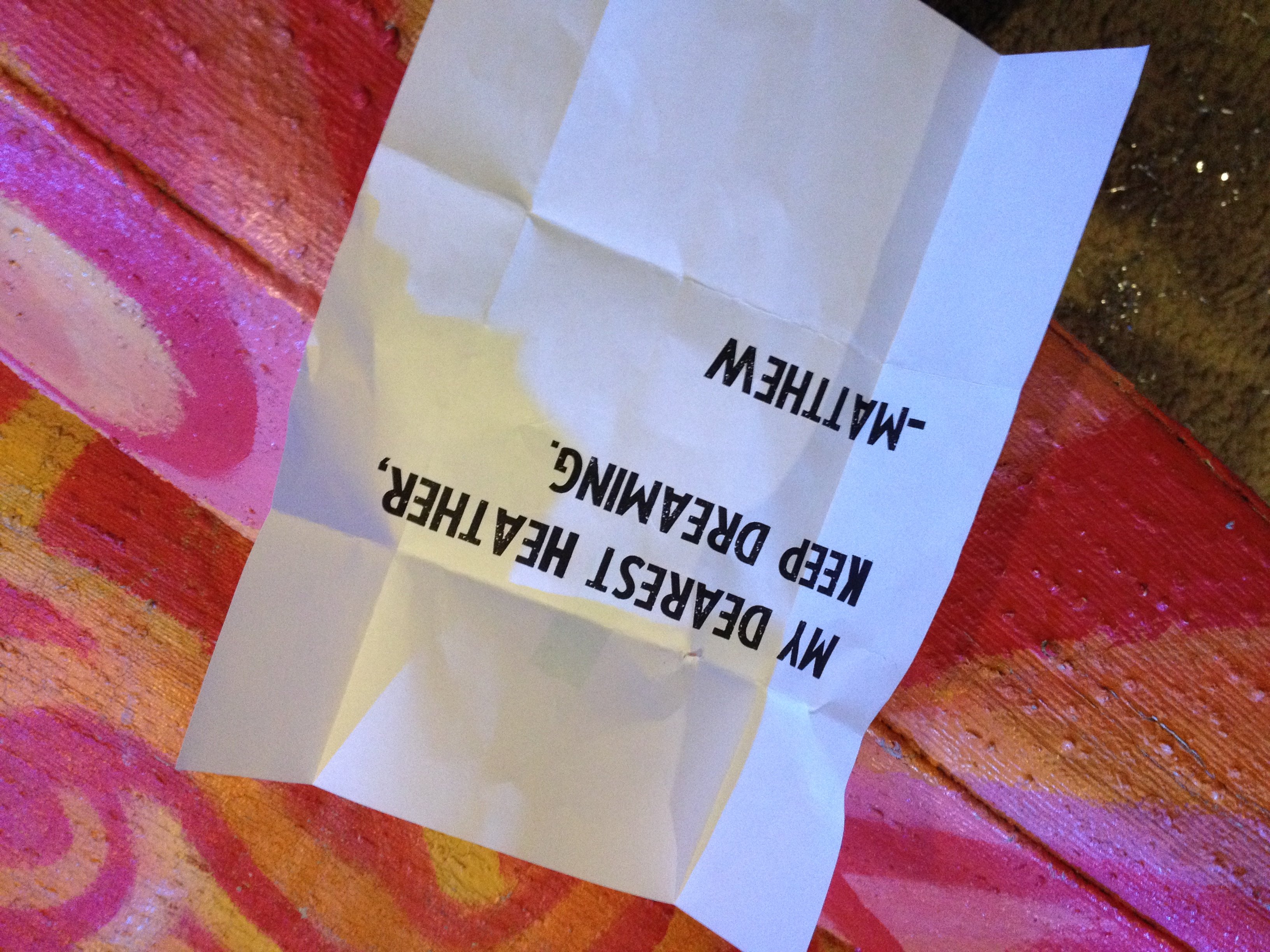 Though I’ve seen a fair number of Sandbox Theatre productions over the last several years, their latest offering This Is a World to Live In is the first one in which I’ve ever found myself stuck in the middle of the action. Say what you will about the unconventional elements of previous Sandbox shows —newts, puppets, guns made out of wood, stuffed animals bigger than most cars —the fourth wall always remained firmly in place. There was a story being told, and an audience sitting and watching it. This Is a World to Live In not only doesn’t have any fourth wall, it doesn’t have any walls the audience can’t walk right up to and touch. It’s not so much audience participation as it is the audience is invited to the party.

It’s a canny move, because just like some previous concept pieces from Sandbox Theatre, the simple outline of it could be misconstrued as hopelessly pretentious. Sandbox always finds a way to deflate such-knee jerk responses with their presentation. This time around, the strategy is to put the audience in the world with the characters. They don’t want you to turn your phones off, they want you to turn them on and document the experience in as many ways as you like, even posting the results online.

“Have you ever had your heart broken?  What was their name?”

This Is A World To Live In is a modern re-imagining of 1960s pop art guru Andy Warhol’s communal artist habitat The Factory. You don’t have to know Warhol’s work to get the concept, although I’m sure those who are will enjoy the production on a whole other level. The audience gathers in an outer gallery full of tongue-in-cheek nods to past Sandbox creations like Zelda: Wonderland and Koogoomanooki and War With The Newts. Some audience members are selectively snuck through a gallery wall to a “backstage” area that the rest of the audience isn’t privy to (adding to that air of exclusivity and the “in crowd”). Ultimately the audience is sent down a passageway in small groupings, taking in images and messages on the walls as they go. Everyone ends up gathering together again at the end of the tunnel, waiting for something to happen, listening to live original music from the character we will soon see as Tim Phast (Tim Donahue).

The music ends, the wall in front the of audience falls away, and Heather Fawn (Heather Stone) waits enticingly on a couch right in front of the group, snacking on something. Behind the couch lurks Kristina Waterloo (Kristina Fjellman) in a  metallic dress. Slowly the other cast members emerge from different corners of the space. Spread out before the audience are a number of stations—a stage for the band, a patch of astroturf behind a tiny silver fence set up for croquet with a string of silver stars hanging above it, a photography studio, a graffiti wall, a painting studio, an installation of an enormous number of yellow cans of Squirt soda, and of course the new, secret art installation behind large white plastic curtains, to be revealed only at evening’s end.

The unveiling of that installation, titled This Is A World To Live In, is the reason everyone is gathered. It has been crafted for Heather by the group’s artistic father figure Matthew Temple (Matthew Glover, the lead on this project, directed by Ryan Hill). This is to be Temple’s final creation. The communal warehouse space the audience stands in is going to be shut down. But the fledgling artists of this group aren’t dwelling on the end of things right now. They’re trying furiously to create something new of their own before Temple arrives, the unveiling takes place, and they have to start thinking about what their own next steps will be.

Peter Glass (Peter Heeringa) uses his phone to create a video of the audience entrance, then decides he wants to do the whole thing again and orchestrate the elements to his liking. He also gathers people in pairs or small groups in his photography area to pose with goofy costume pieces and cartoon thought and dialogue bubbles to hold over their heads.

People gathering over by the music stage may dance or get drafted into playing along with a tambourine or other random instrument. People are encouraged to “destroy the art” by taking a can of Squirt if they’re feeling thirsty.

Theo Baby Charles (Theo Langason) invites people a few at a time over to his wall to add their own words or pictures, admonishing us that we should take a moment and just make sure it’s beautiful. He takes inspiration from the wall later to create his spoken word poetry.

Designated shirtless hunk Derek Lee (Derek Lee Miller) dabbles in both music and painting but feels a little unsure of both his art and his place in the commune. He talks himself up as much as he can, but an unkind word from someone else can knock him off balance.

There are plenty of unkind words coming from Megan Black (Megan Campbell Laga) who appears in the middle of the action to mock the artists, just as they and the audience are settling into a comfortable rhythm together.  Everything gets questioned, nothing is quite what it seems on the surface.

“Show me something real.”

Another memorable late entrance is that of Samantha Shears (Sam Landman), a singing art house diva of few words who takes up a lot of psychic space when she enters a room. The other artists all defer to her as someone who is operating at a different level. Landman gives everyone a show, even passersby outside the storefront window. One curious group of onlookers remained watching the action from outside for an extended period of time, and a visitation at the window by Samantha managed to draw them in completely.

“Isn’t anybody tired of looking at these blank white walls?”

The clever strategy here is not to address the audience as a pack the entire time. The actors hang back just enough to allow the group to break off and explore in different directions. Always in character, the various cast members link up with the smaller groups and interact with them directly, learning names and engaging them in conversation. The audience gets sucked into the world of these people, gets to know them as human beings rather than just someone to be observed. Our own tentative creative impulses are encouraged and reinforced several times as bits of the crowd are cycled through the different stations. If you admit you haven’t done this or that yet, the actors will link you up with the artist in question until everyone has experienced the different corners of the space.

There’s a larger narrative at play here, and it keeps moving, bringing everyone together at key moments, then allowing them to spread out again. The tensions between characters increases with each cycle through the space. The notion of whether hanging out with these people is healthy for each of them individually as people or as potential artists is an open question. Some of the relationships are supportive and some are not. Some of these people aren’t sure who they are if someone else isn’t watching. Some of these people have been playing a role so long they’ve forgotten who they are outside their role. Some people need to break free and strike out on their own.

“Thank you very much for coming.  This was beautiful.”

The grand unveiling of This Is A World To Live In brings everything to a head, naturally. The reason this all works is that the Sandbox ensemble is admitting that turning art into a religion is ridiculous. Often artists themselves are ridiculous. But the creative impulse is still a useful one. And nothing is a substitute for real human connection. By putting the audience in the middle of all this, the audience understands it in a way that they’d be unable to if they were simply passive observers. The whole thing is remarkably complex and well-orchestrated while giving off the aura of being completely random and spontaneous. It’s a strange world, but well worth a visit. You’re not likely to be invited into the middle of another theater production in quite the same way this year, so if you’re looking to shake up your theatergoing a little, check out This Is A World To Live In.