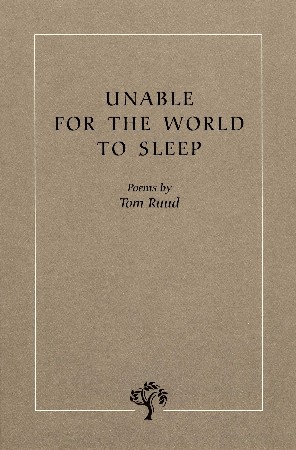 Being a city-dweller, I’m especially grateful for poetry that recognizes the natural world. St. Paul poet Tom Ruud’s debut book _Unable For The World To Sleep_ is full of lovely poems about nature that straddle a sense of awe toward nature and a sense of simply being a part of it. From the poem “October”:

_and the first fall of snow, and the next_
_will slip through their steady fingers_
_into the quiet cage of winter,_
_like jewelry into its case._

Ruud’s poems are tactile, a brash wind against exposed skin, rich scents of rotting leaves or peonies. He accomplishes one of the most important tasks of the poet: to make us actually see the everyday things that usually pas by us unnoticed, to realize the ordinary as extraordinary. A poem about a rabbit nibbling on a fern in the backyard can evoke both joy and sorrow. But these snowy fields, spring afternoons or autumn streets are also populated with people. Meditations on nature become triggers for memories, often from childhood.

Without a bit of coyness or sugary nostalgia, Ruud re-creates experience so vividly, it’s as if the reader is also remembering the same moments. From “I Knew All Along”:

_I crept out of my room,_
_I jumped fences, I tramped like an ant,_
_unled, undeterred by the straight stick_
_or barring finger put across my path._
_I knew the grid game all along_
_but wouldn’t play._

From imagining his father’s return from WWII and his own conception to thinking about an ended first marriage or his elder mother’s stoke, Ruud brings the same sensibility of grounded unsentimental reverence to poems addressing important relationships. Ruud’s poems embody a sense of the weight and reach of time in a remarkable way.

Ruud also takes on religious themes and does so with a somber grace. From “A Gnostic Gospel”:

_In the middle of nowhere_
_with an armload of light,_
_I always pick the closest shadow_
_to pry at like a scab._

In _Unable For The World To Sleep_, Ruud uses language like a craftsman furniture-maker or carpenter: form follows function and beauty is in the service of necessity. Seated at Ruud’s table, we know our own loneliness and longing for home. Looking though his windows, we come to a humbling love for our world.

Tom Ruud is part of the Laurel Poetry Collective, a group of twenty-three Twin Cities area poets and graphic artists who are producing affordable books, chapbooks and broadsides. Ruud teaches at the Loft and has received the Lake Superior Writers Competition Award, a Loft Mentor Fellowship and a Minnesota State Arts Board Fellowship.

_Lydia Howell is the Arts Editor for www.tcdailyplanet.net._